I’ve just watched for about the third time the 1962 film, The Longest Day, a great action movie on the Allied invasion of Normandy. Among its several pluses: an all-star male cast, including a young Sean Connery, as well as a brief segment starring a seriously good-looking woman bearing a strong resemblance to Sophia Loren.

The Longest Day is filmed in black and white, adding, I think, to the authenticity. Remarkably, the many Germans actually speak their own language among themselves, instead of a heavily German-accented English. Curt Jurgens gives an excellent performance as a German officer bitterly skeptical of the Führer’s leadership. His is the “good German” character popular in American movies around the time that West Germany was being integrated into NATO. The joshing Catholic padre, another stock figure in World War II films of the time, makes an appearance.

For me a spine-tingling scene shows another German officer patrolling the Normandy coast with his beautiful German shepherd dog. He’s passing his Zeiss binoculars (the best ever made) over the incoming waters of the English Channel when he stops and freezes. Then he starts screaming, Die Invasion! Es ist die Invasion! What he’s seeing before him is the greatest assemblage of naval power in the history of the world. Of course, his superiors at headquarters don’t believe his telephoned report until it’s too late and the Allies—Yanks, Brits, Canadians, and Gaullist French—have consolidated their beachhead. 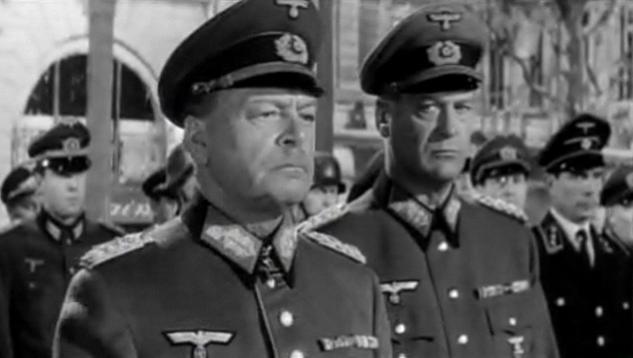 I would argue that another merit lies in the contrast to the way Hollywood portrayed the Japanese in the war. The best, or worst, example is the 1944 movie, The Purple Heart, loosely based on the Doolittle raid over Tokyo. A group of American airmen is captured hiding in China and put on trial for war crimes. (Since the men had engaged in the indiscriminate bombing of civilians, they were clearly guilty.) The movie recounts this fictional trial.

The Purple Heart offers some heartwarming clichés. The airmen include a Lt. Canelli, a Sgt. Skvoznik, and a Sgt. Greenbaum, a smart, brash Jewish lawyer from Brooklyn—persons previously known to their fellow countrymen as wops, polacks, and kikes. But now every last one of us was needed to build that world of love and laughter and peace ever after, with bluebirds over the White Cliffs of Dover. Just you wait and see. Tomorrow. When the World is Free.

The Japanese want to know the location of the aircraft carrier the Americans flew from, and the interrogator is a General Mitsubi, played by Richard Loo. Loo, though actually a Chinese, assumed the role of the evil, smirking Japanese officer in lots of Hollywood offerings. Here he deals out insults, threats, and harsh treatment to the Americans. Skvoznik, when he appears again in court, is mute, catatonic, constantly twitching: he’s been beaten and crippled. His buddies are aghast, while the German war correspondent smiles.

The leader of the Americans, handsome Dana Andrews, the quintessential fighting hero in those days, delivers a fire-breathing speech of defiance at the end. Curiously, he concludes by spitting out the promise that the U.S. air force will burn the cities of Japan to the ground—thus confessing to a major war crime, that was subsequently in fact committed, in advance.

At one point, the judge—no poster boy for judicial impartiality—starts yelling, Corregidor has fallen! Corregidor has fallen! With the fortress in Japanese hands, Manila is theirs. The spectators fall into a frenzy, and in the eeriest footage the navy and army men draw their swords and engage in grim-faced, clanging sword play, dramatically highlighted. The Yanks stare, stunned by the utterly alien scene being enacted before their eyes. For the movie audience, a perfect setup for an Orwellian Two-Minute Hate.

The revisionist historian James Martin once wrote that during the war there were probably millions of Americans who thought that, with the little yellow men, we were literally fighting a species of sub-humans. That illusion was created by films like this one and many others, including Across the Pacific, with Humphrey Bogart and the great Sidney Greenstreet, the fat man in the white suit, as a Jap-loving professor of sociology at the University of Manila (!). They were aided by the rest of the media, as in Life magazine’s notorious depiction of the Japanese as hordes of devouring rats. At least the Germans, though wrong-headed, robotic followers of their mad Leader out to conquer the world, were not usually shown as alien sub-humans.

There were a number of anti-Nazi films during and even before U.S. entry into the war. But the attitude of the motion picture community to Communism and the Soviet Union was quite different. The Boy from Stalingrad (1943), Song of Russia (1944), and other productions informed Americans of the happy life led by the citizens of the Marxist utopia and of their death-defying resistance to the German invaders. Two films of this genre stand out.

The script for North Star (1943) was written by Lillian Hellman, who later lied under oath in denying that she had ever been a member of the CPUSA. It starred Dana Andrews (again), Walter Huston, and Anne Baxter, music was by Aaron Copland, lyrics by Ira Gershwin—the entertainment industry’s royalty. It was nominated for six Academy Awards (naturally). There’s no doubt that the current consensus is correct: North Star is unabashedly pro-Soviet propaganda.

Mission to Moscow (1943) is based on the memoirs of the US ambassador, Joseph E. Davies. It features music by the preeminent Hollywood composer, Max Steiner. Again, we see Russian workers and collective-farm members, cheerfully toiling their hearts out for the Motherland under the benevolent, all-seeing eye of the Vozhd. Mission to Moscow was promoted by FDR himself, and lavishly praised by the country’s most important film reviewer, Bosley Crowther of the New York Times.

A rightwing nut-job might complain that this steady stream of Red rubbish by owners, producers, and directors revealed something rotten, even sinister, about the culture and ruling elite of Hollywood. But who cares what he might say? He is, after all, just a rightwing nut-job.

Now, finally, back to The Longest Day and its many serious minuses. The French civilians of Normandy are portrayed as jubilant at getting their homes blown up. Yet, the historical truth is that they were scared out of their wits. With reason, since more French civilians, at Le Havre and elsewhere, were killed by Allied bombs than English killed by the Germans in the Battle of Britain. The death of their compatriots remained a sore point with the French survivors for years afterwards.

The GI warriors always rush into battle bravely, eager and clear-eyed, often with a humorous quip. There’s not the slightest allusion to all the cowed conscripts, wetting and soiling themselves in terror of their impending death, blindness, or loss of legs and arms. In Hollywood’s version of the war, they never existed.

But the worst demerit of the movie is that it continues and exemplifies what my friend and libertarian scholar, Joseph Stromberg, has called the seven centuries of Anglo-Saxon self-congratulation. The Longest Day gives the impression to the easily impressionable and historically clueless (the vast majority) that the Second World War was won on the western front, principally by the United States and Britain. It never gives the viewer an inkling that in the west the Wehrmacht was mostly composed of older men and raw recruits. The best German divisions, 175 of them, were fighting on the eastern front, against Stalin. It was there that the Second World War was won, and lost. Won not by the Anglo-Saxons but by the Russians, and lost by the Germans. Then followed the Red Army's orgy of rape and murder. Hundreds of thousands of German females were raped, from little girls to old women, most of them gang-raped, many raped to death. Ilya Ehrenburg, the Soviet propagandist, publicly urged on the conquering rapists, and that loathsome gay man, Christopher Isherwood, publicly praised them for their robust virility. Today, all of this has been expunged from the historical record — it never even existed in Hollywood's version — just another one of the forgotten episodes from “the Last Good War.”