West of Memphis is about the discovery in 1993 of the bodies of three local boys about eight years old, hog-tied, beaten and lacerated, in a marsh in Arkansas about 24 hours after they were last seen alive. The incident has become famous in the aftermath of the trial and conviction of three local young men for the evident crime, one of whom was sentenced to death. In a surreal twist of justice, the “West Memphis Three” were all set free in 2012 after 18 years in prison by entering pleas of Guilty under a peculiar legal precedent established in a case styled North Carolina vs. Alford.

This movie is about that process. This review will evaluate that process by way of comparing its details with the process, launched in Germany by the victors of World War II, by which thousands of Germans were convicted of war crimes today packaged under the rubric “The Holocaust” and subsequently executed, imprisoned, and otherwise punished, together, in the public mind, with all of their countrymen and all their descendants in time. New charges, trials and convictions continue to extend this evil tradition even to this day, necessarily with defendants crippled both physically and mentally by the passage of time, even while latter-day poseurs as victims of the crimes exploit their victimhood with the frenzied haste of one who knows that the opportunity is fast running out.

To start with the differences: the Arkansas victims and their accused murderers had no differences of race, language, or religion. They weren’t close neighbors nor did the threesomes know each other. There was no doubt that the boys had been killed, all at about the same time, that they had sustained heavy blows to the head, that they were naked and hogtied, that they had drowned, and there were no other victims. One of the accused had manifested an intense interest in the occult, and another was borderline retarded. As to the Holocaust, there exist substantial differences of opinion as to the numbers of the victims, and exactly what fates besides death befell the victims (deportation to Central Asia, emigration to Israel or other countries, even assimilation into surrounding non-Jewish populations, all accompanied by changes of name). 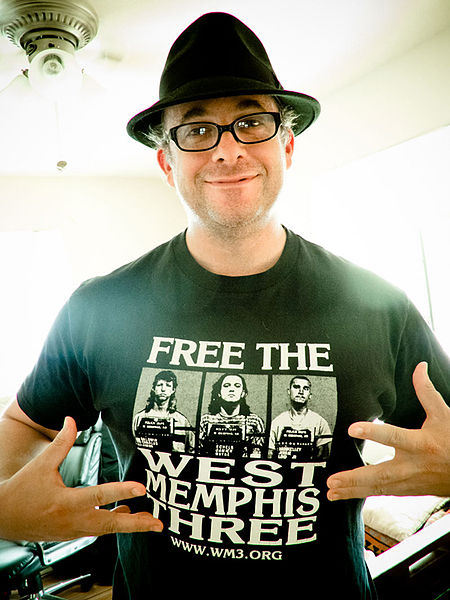 The t-shirt designed by the non-profit organization WM3 Freedom Fund, dedicated to raising money to pay for basic needs of Damien Echols, Jason Baldwin and Jessie Misskelley, Jr., who were jailed in 1996 for the murder of three children in the city West Memphis.
By Will Keightley (Free the WM3) [CC-BY-SA-2.0 (http://creativecommons.org/licenses/by-sa/2.0)], via Wikimedia Commons

A possible difference arises in the matter of motivation. The West Memphis 3 were said to have been motivated by sheer satanic sadism, possibly exacerbated by perverted sex drives (the jury was shown photographs explained by the prosecutor as depicting the results of sexual molestation). The Germans have been adjudged as hating Jews irrationally, possibly as a result of superstition or the conditioning consequent upon generations of said irrational hatred. To suggest that the Germans had any sort of substantive grievance against Jews as a group is a “hanging offense” in most Western countries, and even explaining increasingly harsh treatment of the Jews as the war went against the Germans as a consequence of desperation and deprivation violates laws against “minimizing the crimes of the National Socialist regime,” and is regularly prosecuted in Germany and other countries whenever anyone is caught making public utterances of any such point of view. So, both venues (the court in West Memphis, Arkansas and the war-crimes tribunals) ascribe the crimes to irrational superstition.

The acts of the notional perpetrators were, as disclosed in the movie, sensationally misinferred by the Arkansas judicial process. All three bodies displayed numerous, though in no case life-threatening lacerations and abrasions. Even an instrument of torture, a large, serrated knife, was fished up from a body of water close to the home of one of the accuseds, and the spacing of its teeth was compared persuasively with a short row of scrapes on one of the bodies. The prosecutor, it emerged later, actually knew that this instrument of torture had been thrown into the water where it was found, a full year prior to the events he was prosecuting. Various of the boys’ protuberances, including sexual organs, displayed what could readily be seen to be bite marks, these marks emphatically ascribed by the county medical examiner to the torturers’ crazed attentions. In the movie, the origin of all the peculiar lacerations and marks on the bodies was shown to be the initial nibblings of snapping turtles and other such predators in the waters in which the bodies lay for almost 24 hours.

The acts of the German captors and their allies as to their victims is likewise invidiously described and elucidated in the war-crimes trials that continue, sporadically now, to the present day. Medical attentions aimed either at the well-being of the persons receiving them, or in many cases at protecting the camp populations at large from pestilence, are transmogrified in officially sanctioned testimony as being torture, sadistic experimentation, or even murder, as when delousing showers are repurposed to accomplish genocide through the injection of poison gases into gas chambers through shower heads as the hapless victims discover their bars of “soap” are made of stone. Zyklon B, a well-known pesticide used for killing the lice that spread typhus among the inmates, takes on the role of the killing agent itself, through the undeniable fact that its active ingredient is potentially lethal to human beings.

False testimony, in Arkansas as well as at Nuremberg, played a key role in producing the verdicts desired by the prosecution. In the West Memphis case, one of the accused was known to be “slow-witted;” a psychiatrist, had one been engaged to make an evaluation, might even have found the young man incompetent as a witness. This key witness (at the trials of the other two defendants) offered up a lurid “confession” of perverted, murderous acts on the parts of his fellows that helpfully included all details imaginable of satanic rituals, or at least all that occurred to his interlocutor. Tape recordings of the interrogations are played in the movie (synchronized with typescripts of the testimony) that reveal for all to hear just how the questioner supplied the answers to which the witness assented. Two other “character” witnesses who reported revealing observations of the defendants’ behaviors before the crime, supplied details whose interpretation came as close to precise statements of criminal intent as would seem possible. The movie featured both of these witnesses, over a decade after the trial, totally recanting their testimony and professing mystification as to what might have motivated them to have so blatantly violated all standards of truthfulness.

The Nuremberg and other war-crimes proceedings, of course, are shot through with false testimony, much of it originating with the prosecution, and the rest motivated by the spirit of vengefulness that many witnesses felt to a degree that exceeded even that of the prosecutors. The defense, as is also well known, was virtually not allowed to call witnesses, and many of those who might have testified for the defense refused to do so out of fear of being prosecuted in their turn on the basis of where they would have to have been in order to have witnessed what they had to report. The same fears turned many such witnesses into false witnesses for the prosecution whose guiding purpose in composing their testimony was to make sure that no blame for the alleged crimes could possibly fall upon them. As for those above suspicion, many, no doubt the great majority, were motivated by the fact that only those providing the desired sorts of testimony would be selected as witnesses in the first place, and that those so selected were, for the duration of the trials, provided with ample food and warm shelter in a post-war Europe that was severely short on all essential desiderata for the maintenance of life. Competition for witness status was intense, and the object of creative efforts most certainly to be compared in magnitude with those exerted by Shakespeare, Rodin, da Vinci and others whose works have enriched the lives of posterity rather more than have the testimonies gathered, recorded, and ruled upon in the war-crimes trials.

West of Memphis was preceded during the eighteen years of interest, inquiry and agitation that followed the tainted verdicts by at least two HBO special television dramas and at least two books about the case. None, of course, contains the denouement encompassed by the present film. The present film, which features extensive self-portrayal by many of the actors in the real-life drama, including the West Memphis 3 themselves, further incorporates extensive footage from the original trial and from various events and investigations that followed it. It even contains evocative scenery from the subject environs during voiceovers that lack a video component, and subtly scored and played music for other interludes. This movie also includes one other important element lacking from most of its predecessors: it identifies the perpetrator of the crime and presents the evidence against him.

But the real perpetrator will never be tried. Why Because the case is closed. In their so-called “Alford pleas,” the original defendants all confessed to the crime they never had the slightest hand in. But unlike those executed or sentenced to life terms in the war-crimes trials, they walk free today, albeit with no prospect whatever for restitution.

However tardily, it might be said that justice has finally been done in the case of the West Memphis 3, or more accurately, that injustice has been partially undone.

No such prospect appears regarding those accused of perpetrating the Holocaust, and no such movement as Free the West Memphis 3 featuring luminaries such as Johnny Depp, Patti Smith, and Henry Rollins, among others, exists, at least not “above ground.”

Why is this The answer is, on its face, quite simple.

It is against the law to advocate the innocence, or even to qualify the guilt, of those accused of the ex post facto crimes that made up the Holocaust. If you do so in Germany, France, Switzerland, Austria, or any of a dozen other countries, you will go to jail, where you may or may not have the good fortune to meet some of the others already there for the same “crimes.” No one ever got in trouble with the law for expressing the belief that any of the West Memphis 3 might not be guilty, or that some other might substantially share their guilt, or even displace them as defendants.

The truth, in the case of the “criminals against humanity” may not be discussed. It’s against the law.