For Email Newsletters you can trust
Contribute
Donate Now!
other ways to contribute »
Popular items
About the Author
Robert H. Countess

Dr. Robert H. Countess was born in 1938 near Huntsville, AL. He graduated from Huntsville High School in 1955. After three years in the Army, he began his life-long learning by studying at Bob Jones University where he received his B.A. in Religion and English; M.A. in Religion, and Ph.D. in New Testament Greek. He also received an M.L.S. in Humanities and Philosophy from Georgetown University, and studied at numerous …

A Provocative History of the Aryan Race

While the subtitle "The Complete Story of the White Race" is question begging—no one is able to produce completeness on any subject at any time!—this highly illustrated book with its photos and drawings and maps, but no Index or Bibliography in the present edition, will be welcomed by many readers as long overdue, so as to correct the present lack of balance in social anthropological studies.

This book focuses on a racial sub-group of Homo Sapiens no less than does the Jewish writer Martin Bernal in his Black Athena volumes focus on the Negroid sub-group, nor any less than the Senegalese writer Cheikh Anta Diop focuses on Afrocentrism (more accurately, my term: "Negro-centrism") in his Kemet, Afrocentricity and Knowledge, nor any less the forcefully racial focus of multitudes of books by Jews on Jewish history.

The second volume in this projected series is said (p.311) to continue "the staggering saga of the White Race, beginning with the creation of modern Russia by the Vikings and moving into the settlement of the Americas, Africa, Australia and New Zealand." How many volumes are projected overall is not given.

Author Kemp, writing in Oxford, England, on September 14, 1998, informs the reader of the background circumstances of his study:

"The idea for writing this book came from a perusal of the history section of the Jagger Library at the University of Cape Town, South Africa, in 1983. While undertaking some unrelated research, I chanced upon a book dealing with the history of the Chinese people. Intrigued, I investigated further in that section of the library. I found rows of books dealing with the history of the Japanese, the Black race, the Incas, Aztecs, the Australian Aborigines, the Arabs, the Native Americans, the Polynesians—in fact there was a history of every people and every race on earth—except, much to my surprise, the White race. This lack of a history of the White people of the world has persisted to this day: and it is to correct this imbalance that this book has been written. As it is a history of a defined race, not of any particular country, its narrative follows several continents and centuries, not limiting itself to any one geographical region.

I have always felt that the point of studying history is not the memorizing of some dates and facts, but rather the search for and discovery of the forces causing the results we see before our eyes as historical events.

History lost its value through the efforts of academics producing lists of meaningless dates and names, expecting everyone else to be as interested in their lists as they are. The proper study of history is in reality a tremendously exciting field of endeavour—the exploits and tribulations detailed in this book will hopefully convince skeptics of this! More importantly, history does indeed contain lessons—sobering ones, with massive implications. As this book will show, it raises issues which confronted past civilizations and which confront modern society—how we answer them will determine if our society will survive or vanish like those of old."

In Greek mythology, the sons and daughters of Gaea and Uranus were Titans and Titanesses. These sons’ and daughters’ children were also called Titans. Gaea got them to make war on her "husband" as it were, and they dethroned him and put Cronus on the throne of the Cosmos. In time, son Zeus succeeded his father Cronus and became "The Father of gods and men" and distributed to all humans their good and bad fortunes in life. Again, in time, he battled against the Titans and consigned them to a hellish or heavenly place, depending on which strand of the myth one accepts.

In short, the Titans have a reputation for enormous accomplishments, but they suffer from a reputation based on warlike deeds.

He properly begins with defining the key term and divides Whites into three subgroupings: Nordic, Alpine, and Mediterranean. Nordics were originally in northern Europe, Alpines in central Europe, and the Mediterraneans in southern Europe. The Mediterraneans are no longer existent today, having been submerged for the most part into the sea of Nonwhite Arabic, Turkic, and Negroid subgroups. On page 2 is an illustration of skulls, pictures, and descriptions of these three subgroups.

His treatment of ancient history with photos and analysis is fascinating and engages one’s sense of eagerness to explore his theory in greater detail. Stonehenge, of course, provides a central clue to the megalithic capabilities of the White Race and must be compared to similar structures on other continents and islands along with the first step type pyramid, found near Marlborough in Wiltshire, England, dating to circa 2600 B.C. (p.15)

Chapter Eight allows one to enter perhaps the most controversial field of study in the Ancient Near East (ANE)—Egypt. "Egypt had been settled by three White groupings prior to 3500 BC, namely the Old European Mediterranean types." He writes of evidence to support significant numbers of Semitic and Negroid (= Nubian) presence in the Nile Valley alongside them—"and against whom the Egyptians waged war and enslaved for nearly 2,000 years." (p. 56)

Aryan, Iran, Iraq, Ireland, Harappa, Europe, Sumer, Tocharian—built on the same linguistic root? One must read the early chapters to see that the author attempts "to connect the dots," as it were, between certain terms that might point back to an original ar-/-ir root for these Titan types. Surely, there is evidence for further linguistic and archaeological study on this fascinating observation to provide more verification or to falsify it.

Chapter Five may well possess the most cogent thesis and data of the entire book. "Most modern Whites are to the greatest part, either direct or part descendants of a great wave of White peoples who swept into Europe from about 5500 BC till around 500 BC." (p. 22) Kemp’s drawing of the Mediterranean and ANE regions of the mid-sixth millennium BC (= 5600 BC) shows the Titans moving out from the present day Ukraine plains, but now the Black Sea after the melting of ice sheets at the end of the Pleistocene era, which led to a rise in ocean levels to some 300 feet over centuries. The Mediterranean Sea overflowed through the narrow Bosporus neck and into the fertile plains of south central Russia-Ukraine and flooded the region, creating the Black Sea. (Leading me to ask if extensive exploration activity has taken place in order to map out any man-made formation on the floor of the Black Sea.)

For author Kemp, this mega movement of water created the basis for the Biblical legend (not "myth") of the Noachian Flood.

And, from the steppes, now under water, Whites moved out in waves in every direction, thus establishing civilizations for which words such as Baltic, German, Slavic, Celtic, Pre-Dynastic Egyptian, Sumerian, Indo-Aryan, Aryan, Tocharian, and Ainu, can be used.

This reviewer found the photographic reproduction—it ought to have been given a whole page!—on page 23 to be marvelously pregnant with meaning if it is indeed genuine and if the dating is accurate. And there is no reason to doubt what Kemp provides.

On the left is "A finely cast Bronze wagon complete with figures, from Strettweg, Austria. 700 BC." Next to it is "The Dejbjerg wagon from Denmark, circa 500 BC; includes an astonishingly sophisticated roller bearing system of wooden pins in a bronze brace, to facilitate the turning of the wheel on its axle." 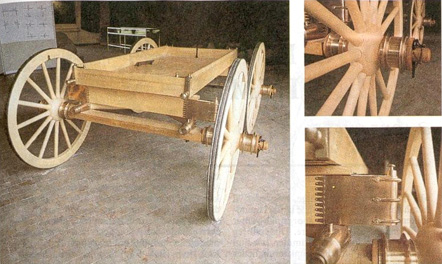 The Dejbjerg wagon, Museum Hollufgård in Odense, Denmark (top) and National Museum in Kopenhagen (bottom), both circa 500 BC 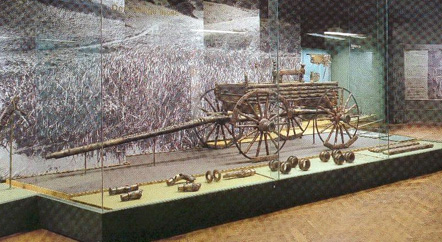 Indeed, if all is in order here, "Such sophisticated technology shows that the Pre-Roman Empire Celts, Germans, Balts and Slavs were actually not ‘barbarians’ at all but highly developed people capable of stunning and complicated technological feats such as these." He even has an enlarged drawing of the hub with the rolling bearings and its bearing race.

Kemp is to be faulted for not citing the present museum location of these items. Recently, I showed this picture to a Danish scholar and he had never heard of "the Dejbjerg wagon." Kemp’s volume suffers overall for lacking complete footnote or endnote references and a bibliography, which is, I am told, to be corrected in a third edition to be published later in 2002.

Kemp makes severe criticisms of Christianity as a non-Aryan religion and (justly) criticizes the violent spread of Christian influence from the time of Constantine the Great forward until all Europe became (largely) Christianized. His own positive favoring Aryan/Norse/Teutonic/Celtic pagan religion is obvious in Chapter Thirty Eight and elsewhere. In fact, his favorable treatment will remind some readers of some Germans of the National Socialist era, but one, of course, must be careful not to make simple equations of religious sentiment and political sentiment of a bygone era.

Observations Derivable from March of the Titans

I made a list of observations about historical development of the White Race that Kemp might well agree with. These observations are based, I believe, logically on the content and spirit of his work. They are listed here and are my own interpretations:

I look forward to the second volume and others with a critical mind. Kemp’s evidence is persuasive at times but unpersuasive at others. But, the very fact that he attempts to do what, seemingly, no one else has done up to this time, is itself praiseworthy. I only hope that the technical aspects of the succeeding volumes will be greatly improved in order to satisfy the higher demands of original scholars and highly adept students. The general public will profit enormously from the present state of this initial volume—already sold out, I am told—but all in all, the subject has been so severely neglected that it deserves the best treatment.