A Revealing But Flawed Look at Jewish Political Clout

Shawn L. Twing is news editor of Washington Report on Middle East Affairs (P.O. Box 53062, Washington, DC 20009). This review is reprinted from the June-July 1997 issue of The Washington Repor.

Jewish Power, by J. J. Goldberg, is an insider's eye-opening and often startlingly frank discussion of Jewish influence in American politics, and an examination of the historical factors that have made that influence possible. What is extraordinary about Jewish Power is the blatant double standard it illustrates. Had the same book been written by a non-Jewish author, it would certainly have been dismissed as the product of anti-Semitic bias and a predisposition for conspiracy theories. Supporting this assertion are several notable examples.

In chapter 9, "'I Am Joseph Your Brother': Jews and Public Office," Goldberg discusses the presence of several Jewish Americans in key political positions, and how their religious/ethnic identity has affected their performance on the job. Of particular interest were the Bush administration officials in charge of the Middle East peace process under Secretary of State James Baker. Describing Dennis Ross, Aaron David Miller and Daniel Kurtzer of the State Department, and Richard Haass of the National Security Council as "Baker's Jewish peace team" (p. 231), Goldberg points out that "Haass was educated in a Reform [Judaism] congregation," that "Ross, Miller, and Kurtzer all were active synagogue goers," and that "Miller and Kurtzer both maintained kosher homes and sent their children to Jewish parochial schools." Does being Jewish affect their performance on the job? One of the four, who spoke on condition of anonymity, said, "We act in America's interest, but through a prism." 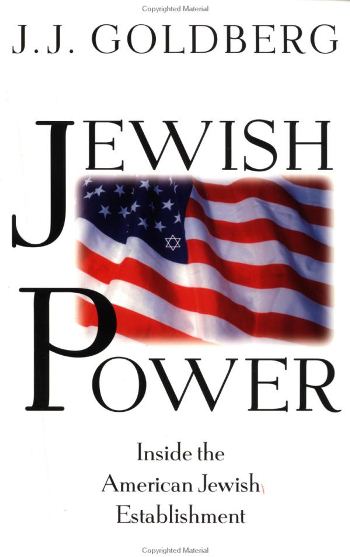 These same words, reported by a non-Jew, certainly would have evoked charges of anti-Semitism, and would have made it difficult to get the book published, much less distributed. Analyzing the motives of prominent Jews in politics, or even commenting on their religious identity, simply is unacceptable for non-Jews, a double standard that makes it increasingly difficult to communicate frankly.

Nevertheless, the fact that Baker created an entirely Jewish peace process team also is significant in Goldberg's eyes. Two members of that team, Dennis Ross and Aaron David Miller, were held over to lead the Clinton administration's efforts to bring peace to the Middle East, along with US Ambassador to Israel Martin Indyk.

If indeed they view their jobs "through a prism," is it reasonable to assume that the United States really is an "honest broker" for peace? Imagine, if you can, the reaction that would follow an announcement that, for its second term, the Clinton administration was appointing a Middle East peace process team comprising entirely Muslim Arab Americans: American Muslim Council executive director Abdurahman Alamoudi, Council on American Islamic Relations executive director Nihad Awad and president Mohammed Mehdi of the National Council on Islamic Affairs.

In fact the comparison is particularly apt because of the present team, US Ambassador to Israel Martin Indyk is a former official of the American Israel Public Affairs Committee (AIPAC), and a founder and first executive director of AIPAC's think-tank spin-off, the Washington Institute for Near East Policy, and Ross is a former fellow of that Institute. Even author Goldberg seems baffled at why all of the top members of America's Middle East peace team must be not only Jewish, but also closely identified personally with Israel and its myriad of supporting organizations in the national capital.

Some of Goldberg's statements describing the political clout of AIPAC, Israel's all-powerful Washington, DC, lobby, and other organizations representing organized American Jewry, also very likely would be challenged if made by a non-Jewish author. For example:

All of these things have been reported by the Washington Report on Middle East Affairs and other media, yet they are denied routinely by pro Israel activists, who dismiss such statements as conspiratorial and anti-Semitic. That Goldberg documents them convincingly, and in context, is useful in itself. It also validates non-Jews who have reported these facts for years. The difference, how ever, is that Goldberg apparently sees nothing wrong with AIPAC's actions.

Goldberg makes a factual error in reference to a lawsuit brought first against AIPAC in 1988 and later against the US Federal Election Commission's handling of AIPAC by seven retired government officials, including Washington Report publisher Andrew I. Killgore and executive editor Richard H. Curtiss. Goldberg writes on page 268 that the case was "dismissed for lack of evidence." In fact, only the case's complaint against 27 political action committees established and directed by AIPAC was dropped. The remainder of the case against AIPAC resulted in an FEC decision that, although AIPAC was functioning as a "political committee," since electioneering was not AIPAC's principle function, the FEC would not force it to comply with the disclosure laws that such committees must observe. Subsequently, the United States Circuit Court of Appeals ruled 8-2 on December 6 [1996] that the FEC must enforce its own rules against AIPAC. Rather than having the marathon case against it dismissed, therefore, AIPAC appears to have lost the suit, and may have to open its receipts and expenditures to FEC scrutiny, something AIPAC has vowed never to do.

Another controversial topic Goldberg addresses is Jewish influence in the American media. In chapter 11, entitled "We Have Met the Enemy and It is Us: Jews and the Media," he writes (p. 280):

Jews are represented in the media business in numbers far out of proportion to their share of the population. Studies have shown that, while Jews make up little more than five percent of the working press nationwide – hardly more than their share of the population – they make up one fourth or more of the writers, editors, and producers in America's "elite media," including network news divisions, the top news weeklies and the four leading daily papers (New York Times, Los Angeles Times, Washington Post, and Wall Street Journal)

Goldberg points out, however, that American Jewish activists describe the media as "a major source of anti-Jewish bias" (p. 280). Goldberg devotes the rest of the chapter to reconciling the contradictory themes of pro-Israel and anti-Israel bias, and in so doing provides penetrating insights into the question of Jewish influence in America's media.

"The case for pro-Jewish bias rests largely on the work of a handful of influential writers who regularly take it upon themselves to defend Jews and Israel and to attack their enemies," Goldberg writes (on page 290). The "short list" of those writers, according to Goldberg, includes New York Times columnists William Safire and A.M. Rosenthal, and Richard Cohen of The Washington Post.

Indicative of their "verbal firepower," according to Goldberg, was a 1993 column by Safire, whom Goldberg describes as "one of the best connected and most feared members of the Washington press corps," that "sank the nomination of Admiral Bobby Inman as director of the Central Intelligence Agency, largely by accusing Inman of being anti-Israel" (p. 290). Because Goldberg does not elaborate, it is worth quoting two sentences from the February-March 1994 Washington Report (p. 28) that fill in the details:

Bill Safire wrote in a column published in The New York Times on Dec. 23 that Bobby Ray Inman had restricted information available to Israel from US intelligence agencies, had fingered Israel as the source of the false "Libyan Hit Squad" story that turned the White House and key government agencies into fortified bunkers, and had supplied the information for then Secretary of Defense Caspar Weinberger's stern assessment for the sentencing judge of the extent of damage caused US intelligence agencies and agents by convicted spy Jonathan Jay Pollard. From the moment they read Safire's column, Israel's apologists in the US media knew what to do.

Although the story itself is not new, Goldberg's frank discussion of the power of a Satire column to "sink" a cabinet-level nomination simply by accusing the nominee of hostility to Israel, is both enlightening and frightening. Goldberg makes it clear that this "Jewish power," in his own words, is tangible political power recognized both by those who oppose it and those who wield it

In his discussion of Jews in the media, Goldberg repeatedly refers to Israel's "warts," a peculiar term he uses to describe the country's darker side. In the reviewer's opinion, Goldberg's casual use of the word is subtly misleading. "Warts" are merely cosmetic afflictions, but confiscating Palestinian land, razing Palestinian homes, legalized torture, military attacks against civilian populations, and other examples of systematic brutality by Israelis against their Arab neighbors might more accurately be described as a "cancer" within the body of the young nation.

In the final analysis, Goldberg's Jewish Power is both well-written and informative. His thesis is that although the organized American Jewish community has grown extraordinarily powerful, individual US Jews still see their community as weak and ineffective. The examples he provides, and the matter-of-fact tone he adopts to make his points, are more than convincing.

Goldberg devotes the prologue to Jewish Power to George Bush's now famous Sept. 12, 1991, speech to the American public urging Congress to postpone granting Israel's request for $10 billion in loan guarantees. Bush hoped to link them to a moratorium on Jewish settlements in occupied territories and to Israeli participation in the upcoming Madrid conference. When he came under intense pressure from the pro-Israel lobby and members of Congress to acquiesce to Israel's request immediately and unconditionally, Bush took his case directly to the American people. In an unprecedented speech on national television, he explained: "I heard today there were something like a thousand lobbyists on the Hill working on the other side of the question," and that he was only "one little guy down here" trying to work against what he described as "some powerful forces."

While Goldberg details the Jewish community's overwhelmingly negative reaction to the president's remarks, he seems curiously oblivious to Bush's supporters, suggesting they are drawn solely from the extremist fringe. "By Monday morning's mail, the president had accumulated a small mound of Jew-bashing congratulations," Goldberg writes, charging that the president inadvertently "had touched an unforeseen chord in the American heartland." What Goldberg neglects to mention in his book, however, is that public opinion polls immediately after Bush's speech showed that 86 percent of the American public supported the president, a reaction hardly confined to the political fringes.

For all of its merits, it is unfortunate that Goldberg's book does not address some cruder exercises of power by some American Jewish leaders. Examples are the often venomous criticism of journalists and others who report serious Israeli abuses of human rights, and the practice of labeling such critics "anti-Semites" if they are not Jewish, and "self-haters" if they are. Such silencing of objective political, journalistic and academic discussion of US support for Israel, and its consequences for American national interests, does not serve freedom of speech in the United States. Nor, in the long ran, does it serve the best interests of Israel or the American Jewish community.