Building Monuments - and Tearing Them Down 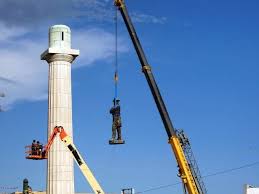 Even as New Orleans dismantles and sequesters the 1877 statue of Robert E. Lee adorning the center of “Lee Circle” in New Orleans, ground is being broken in London’s Victoria Tower Gardens Park for a memorial to the victims of the Holocaust.

Memorials come, memorials go. In the former Soviet Union, statues of Stalin and Lenin are pulled down, and movements arise for restoring some of them, at some times, and in some places.

Who, indeed, wants what memorialized, and why? And when? And who gets their way, and how, and when and why? The memorial-destroyers and the memorial-builders have at least one thing in common: their side won the war. So, they must be in the right.

They had the most guns (and bombs), and had used them most-destructively. They had better soldiers, or more of them, or both.

After the Allied occupation of Germany in 1945, no monuments to Hitler were erected; indeed, Germany’s “own” government enacted strict laws against “glorifying” the National-Socialist regime of 1933-1945, and has enforced them with a vengeance through all the seven decades since Germany’s defeat and occupation.

The American Union’s occupation of its southern states that sought to leave the union may, in the long term, have been gentler. Those monuments, like Lee’s, were put up after the end of what is called Reconstruction. In those days. The birthdays of Robert E. Lee, and perhaps Jefferson Davis, were school holidays. The barefoot children of the South did not have to attend school on those days—presumably not even the “colored” ones, who at the time increasingly did have “their own” schools.

The school holidays for Confederate heroes seem to have faded away somehow. By my time in Florida’s school system in 1950, I remember no such thing, but … what is memory? Maybe I did get those days off in my first few years of elementary school.  The past is a foreign country, and I was a child, and what do children know of such things?

But the statues. There was no fuss from anyone about the statues until recently. Indeed, there was no movement to erect Holocaust memorials until … when? The Soviet occupiers of Auschwitz, of course, put up the odd plaque in the camp claiming that the Nazis had murdered 4 million or so “people” at Auschwitz, but no one seems to have paid any attention to that, even after they walked the claimed number back to 1.2 million or so. The first Holocaust memorial outside Israel would seem to have been that erected, precociously, in Paris in 1956. France was, in 1990, the first country to enact laws (the Loi Gayssot) criminalizing the minimization or denial of the crimes said to have been committed against Jews by the National-Socialist regime of Germany during and prior to World War II.

So … there would seem to have been a hiatus of sorts between the commission of the Nazis’ heinous deeds and the memorialization of the victims. Not all monuments to figures (specific ones or figurative ones such as “soldiers who gave their lives for the Confederate cause”) sprang up immediately after the War between the States, either. A study by the Southern Poverty Law Center (SPLC) indicates the year 1909 as the all-time peak of building and erecting Confederate monuments, or some 44 years after the end of the conflict. Forty-four years after the end of the Holocaust works out to 1989, a year during which, to be sure, many Holocaust memorials will have been opened, but a casual tally (no such study as that of the SPLC of Confederate memorials would seem as yet to have been conducted) of members of the Holocaust Association reveals, as of March 2019, members in 36 countries amounting to 244 institutions. Holocaust-memorial institutions, obviously, quite overflowed the nexus of the Holocaust itself (there are monuments in Suriname, as well as in China), while Confederate memorials are confined largely to the Southeast United States, with a few exceptions.

There is, for example, an entire community of Confederados in Santa Bárbara d’Oeste, Sāo Paulo State, Brazil, complete with a festa put on by the descendants of American Southerners who emigrated to Brazil after the Confederate States of America lost its desperate battle for the right to exist. The SPLC has not as yet targeted this group or its memorial and cemetery, but pictures from recent festas suggest that, what with the Internet and all that, the displays of recognizable confederatalia have been suppressed or altered out of all recognition to zealous norte monitors seeking to eradicate all signs of what they interpret to the rest of us as racial “hatred.”

For a war, or even a Holocaust, 44 years might be about the time the largest numbers of veterans (the term is as apposite for Holocaust veterans as for war veterans, neither of whom is necessarily a willing volunteer) were dying natural deaths. Those either mourning their fathers and brothers and those seeking to claw martyrdom back from the dead onto themselves might perceive the greatest impetus, or opportunity, to erect memorials, to their beloveds, or to the involuntary donors of vicarious martyrdom.

Confederate memorials and Holocaust memorials share many things in common, one of the most-notable of which is that they are built on “donated” public land. The memorials themselves, with the notable exception of the US Holocaust Museum and Memorial in Washington, DC, were built with private funds raised by organizations such as the Daughters of the Confederacy. A question that arises frequently with regard to the older cohort (the Confederate) of memorials is: why didn’t “offended” groups, such as Blacks, object to the emplacement of the memorials and, once the memorials were in place, why did several generations pass before “they” (or sympathetic groups of others) raised objections to them?

The reasons are manifold, and obvious to those who afford adequate attention to differences between the present times and the times in question when the Confederate memorials were raised, and stood in place for so many peaceful decades. No one alive today has observed all this period at first hand, but it’s known that before, say, 1950, most Southern Blacks were disenfranchised in one way or another, so they couldn’t vote against the use of public land for these purposes. Something that might be less well-remembered is that, before, say, 1950, Blacks were simply not allowed in public parks that Whites used (today, many of the same parks are predominantly used by Blacks, to the exclusion [by themselves] of Whites). And finally, it might not have been until, say, 1950 that most American Blacks (to say nothing of their White compatriots) could be counted as able to read the inscriptions engraved on the plinths of the statues in the park. Yes, mandatory education funded by taxpayers has indeed brought us together.

Once they could (and increasingly did) visit the parks, and once it was known that they could read the inscriptions on the monuments, hallelujah! A Cause Is Born. And a certain segment of the American political bestiary, ever lusting for a cause, put on their motorcycle helmets, picked up their baseball bats, and got on those buses that transported them into the heart of the enemy’s territory, there to do battle with assorted bigots and neo-Nazis who wished the statues of yore not to be taken away and smelted.

But change itself … Well, you’ll be gone yourself, someday, and so will I.