This may be Inconvenient History’s first Profile of a living subject. David Irving (born 1938, England) is not only living, but—very happily for the rest of us—working at a pace that would tire anyone half his age, at this moment on a biography of Heinrich Himmler. His only career after a stint as a millworker in Germany’s renascent steel industry after World War Two has been researching, writing, and publishing history, all of it placed within Europe in the Twentieth Century. His distinguished and strife-torn career, then, is already about twice as long as any “average” career, and his productivity exceeds all norms by a large multiple. While his aggressive interpretations of the evidence he examines produce books that read like novels (with footnotes), not one of his titles, neither in English nor in his equally fluent German, is fiction.

Two virtues distinguish David Irving from other historians. First, he is quite innocent of formal education, or training, in history. In fact, he claims no college degree whatsoever, though he obviously commands erudition vastly in excess of the secondary education he received. Concerns for a secure and respected career as an academic historian have, therefore, never affected his pronouncements. Second, he bases his historical findings entirely on original sources—writings in most cases, and direct personal interviews in others. His application of this policy is rigorous—he in fact eschews not only translations, at least of German sources, but he also avoids even purported transcriptions. A striking example of this practice appears in the extensive personal diary of Joseph Goebbels, who wrote the journal in his own neat, but archaic handwriting, quite illegible to native readers of German today. Irving has painstakingly trained himself in deciphering this script to a level of accuracy probably attained by no other person since Goebbels’s death. His biography of Goebbels appeared in 1996. 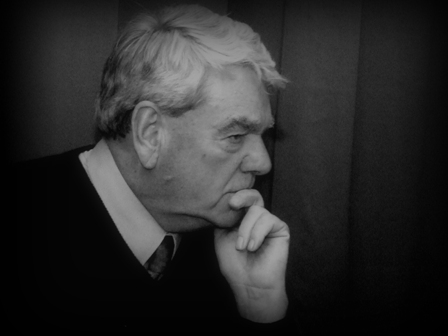 The research, writing, and publication of Goebbels—Mastermind of the Third Reich, in fact, provides a good example, from among many, of the Sturm und Drang that have characterized Irving’s tumultuous career. By the time (1992) he completed what turned out to be the first version of his biography under contract with Scribner, a complete set of microfilms of Goebbels’s diaries had suddenly come to light in newly opened archives in Moscow. Irving secured a commission from the London Sunday Times to “edit” and report on this material, but news of his £75,000 engagement encountered such an uproar that not only that job, but the Scribner contract as well were withdrawn, along with their fees. Irving had long since attracted the malevolent attentions of powerful interests who opposed renditions of history that displeased them with tactics far outside the ambit of argumentation, fair or otherwise.

By 1995, however, he had secured a new contract for the pittance of a $25,000 advance with St. Martin’s Press, and his much-revised book was scheduled to be released later that year. But no, not then, not now, or ever, so far as Irving’s pursuers were concerned. After two weeks or so of a courageous-appearing resistance to the onslaught, St. Martin’s finally caved in to the weight of threats and calumny and cancelled the project. Irving brought out the book through his own publishing company, Focal Point Press in the UK. Today, Irving gives away electronic copies of Goebbels and such of the rest of his oeuvre as he holds the requisite rights to through Focal Point’s Web site[1], encompassing the bulk of his vast and invaluable works.

By 1998, then, Irving had had enough of this persecution, and in a move that hindsight has proven ill-advised, lashed out against one of his critics who had virtually built her career in “Jewish Studies” on attacking him: Deborah Lipstadt. Lipstadt’s 2000 trial for libel is by far the most famous among those involving “Holocaust deniers” in which the “denier” is not the defendant. And Claimant Irving accused Lipstadt and her deep-pocketed publisher, Penguin/Putnam, of the libel of literally labeling him a “Holocaust denier”—Holocaust Denial Denial, if you will—in Lipstadt’s 1993 Denying the Holocaust: The Growing Assault on Truth and Memory. The exhaustive trial naturally attracted the attention of interested parties around the globe. The numerous and powerful interests on Lipstadt’s side were gratified by the verdict, which not only rejected most of Irving’s charges, but further assessed the considerable costs of the trial against him. The outcome bankrupted Irving, destroying not only the impressive career Irving had built up to that point, but depriving him of his personal fortune to boot.[2]

The Irving-Lipstadt libel trial was by no means Irving’s only day in court. On the other occasions, Irving is found in the defendant’s dock, to which those who espouse inconvenient views of history are much more-accustomed as a group. Irving has been charged with, and found guilty of, illegal speech—always on historical matters—in at least four countries, has been deported from Canada, barred from entering Australia, fined in Germany, and imprisoned in Austria. The year he spent in prison in Austria for “Holocaust denial” formed the basis for his only autobiographical work to date, Banged Up. In that Irving was well aware of the charges pending against him in Austria at the time of his 2005 return to that country, it would very much seem that Irving meant to face the charges there, whatever his expectations regarding the verdict might have been.

It was during this trial that Irving displayed a willingness to revise not only the work of other historians, but his own as well. Citing his review of the papers of Adolf Eichmann, he testified, “I said that then based on my knowledge at the time, but by 1991 when I came across the Eichmann papers, I wasn't saying that anymore and I wouldn't say that now.” And this was by no means the first time. Under rather less duress, he removed from the second edition of his bestseller Hitler’s War all references in the prior edition to gas chambers, so impressed was he by the report and testimony of Fred Leuchter, at one time acknowledged as America’s foremost supplier of execution hardware, who announced his conclusion that the Germans did not have or use homicidal gas chambers during World War Two.

Regardless of what his position(s) might be at the present moment, Irving’s statements and/or published works have expressed the following conclusions on his part:

Any of these beliefs qualifies its adherents for labeling as “Holocaust deniers” in the demonography of those whose office it is to defend the Holocaust mythology. But in the minds of those who address the events comprising the so-named Holocaust as a historical matter, even all of these beliefs fall far short of justifying the epithet, consigning the label itself to the same bestiary occupied by the vampire and the werewolf, where it belongs.

Despite the arrests, trials, deportations, and imprisonments, the weapon that seems most often to be employed against Irving by his malefactors is financial, perhaps a betrayal of just who those malefactors are, or at the very least, the ambit of their machinations. One such device was deployed very publicly in 2009 by a Brooklyn politician whose constituency is animated by its large Orthodox Jewish constituency. Dov Hikind, New York Assemblyman for a district centered in Borough Park, led an initiative signed by twelve other area politicians to get American Express to deprive Irving’s customers around the world of the use of their cards to pay him for copies of his books, video productions, and admission to the talks he gives in the countries he’s still allowed to enter (talks from which he is of course careful to excise whatever he might otherwise know that it is illegal to tell in various countries). To be thorough, Hikind then followed up with MasterCard, Visa, and PayPal, in doing which he anticipated the later move of another Jewish politician, Joe Lieberman, in punishing Julian Assange for the sins Assange committed through his leadership of Wikileaks. Hard is the way of the transgressor.

Speaking of Wikileaks, that famous and ever-growing site features material (e-mails, merchandise orders, names and dates) said to have been hacked from the Web site of none other than the nefarious David Irving himself. Yes, in October 2009, while Irving was on a tour in the United States that was much beset by intrusions into his private gatherings, someone literally stole the contents of his Web site. Although the verb “stole” is applied, say, to what Bradley Manning is accused of having done with low-grade US diplomatic secrets, in fact nothing was taken, in the sense that the original possessors of the material continued to possess it. Not so with the hacking of Irving’s site, which the hackers in fact erased after purloining its contents. After its contents were scrambled to prevent Irving from recovering his own data, the semi-intelligible remains (possibly augmented to suit the actors’ agenda) appeared on Wikileaks, and can be found there to this day alongside videos of crimes some might consider “more” serious, such as rocketing innocent civilians in downtown Baghdad.

Over a period of decades during which he has been hounded, attacked, charged, fined, convicted, imprisoned, denounced, and had numerous contractual relationships broken up by assailants both known and unknown, Irving has developed and publicly expressed his impression that many of these coordinated efforts against him seem to be conducted by Jews, many of them announcing that their actions are motivated by concerns for Jews and Judaism. On the strength of these remarks, further attacks have been made on him for anti-Semitism. The matter has by now become somewhat reciprocal. The diligent student of first causes might divert himself long and deeply with the questions of “who started” this loss of love.

Irving has at various times, particularly after the destruction of the enviable reputation he once enjoyed among respectable publishers, historians and the reading public, been quite forthcoming about his racial preferences, starting with the admission that he has them, and continuing on to the revelation that the race(s) he prefers is the one he considers himself, his daughters, and evidently their mother, to be members of. He has pronounced himself something of a separatist as to racial groups, and more-emphatically expressed the hope that his four living daughters should not marry outside their race.

During the decades he has had to struggle for the support of a readership (he does not seem to have any particular patron, at least not publicly), fans with apparent neo-Nazi affiliations have approached him, and if only to meet his living costs, he has accepted financial and other support from them. It would be fair to say that he was practically thrust into their arms by the success of his detractors in denying him the more “reputable” associations he had attained earlier in his career.

Even after his travails, David Irving continues to enjoy the grudging respect of highly respected professional historians, even to the detriment of other professional historians who attacked him. John Keegan, author of many books intersecting with the subject matter of Irving’s work and a witness for Irving at the celebrated libel trial, wrote thus in its aftermath:

“[Irving has] many of the qualities of the most creative historians. He is certainly never dull.” He continues regarding Lipstadt, “dull as only the self-righteously politically correct can be. Few other historians had ever heard of her before this case. Most will not want to hear from her again. Mr. Irving, if he will only learn from this case, still has much that is interesting to tell us.”[3]

Just what it is that Keegan challenges Irving to learn from this case is left for us to ponder.