Doug Collins served with the British army during the Second World War, and then with the British control commission in postwar occupied Germany. An award-winning journalist, he has worked for several Canadian daily newspapers, and is the author of several books. His presentation at the Tenth IHR Conference was published in the Fall 1991 Journal. For more about Collins, see the Nov.-Dec. 1994 Journal, pp. 43-46. The two essays published here are reprinted with permission from his columns in the North Shore News (North Vancouver, British Columbia), April 2 and May 3, 1995.

Canada is getting a bad name. We are seen as a country in which people with the wrong opinions are pilloried by the thought police.

Professor Phillipe Rushton of the University of Western Ontario is still being hounded for having concluded that the intelligence levels of the various races differ. Here's how the US highbrow Chronicles magazine saw that in its March [1995] issue: "A well respected psychologist ... Rushton has been vilified repeatedly in the Canadian press, hounded by left-wing mobs, denounced by government ministers, and threatened with the loss of his job under Canada's notorious race relations laws."

"Race relations laws" means our human rights menace and the hate laws. A new booklet by Ontario lawyer Barbara Kulaszka shows how vicious they are. Hate Crimes Law in Canada is a dispassionate review of 44 cases that range from the Zündel and Keegstra affairs to the charges against three youths who distributed "Yankee go home" pamphlets at a Shriners' convention in Toronto.

The double standard prevails. Books disliked by Jewish groups are banned routinely, The Hoax of The Twentieth Century being a prime example. Yet although Salman Rushdie's book, The Satanic Verses, is highly offensive to Muslims, it is freely distributed – as indeed it should be. Toronto Sun columnist Eric Margolis commented that if the hate laws were to be applied equally, Rushdie's book would have been banned, too.

Double standards? In 1989, Edgar Bronfman, the then-president of the World Jewish Congress, stated in Montreal with regard to Austrian President Kurt Waldheim, falsely accused of being a war criminal: "Let Austria decide whether it is a civilized country or the dirty anti-Semitic dogs they have so far been ... " [Toronto Globe and Mail, May 8, 1989]. A complaint was laid against Bronfman for "inciting hatred against the Austrian people." Predictably, it was consigned to the trash basket. 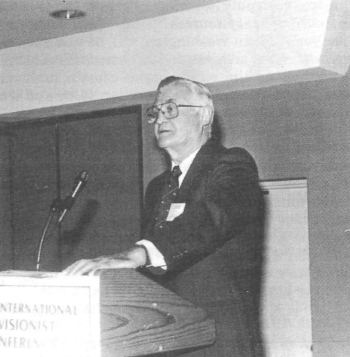 Perhaps the biggest outrage was the arrest of British historian David Irving and his expulsion from the country [November 1992], an event that got a standing ovation from the Vancouver media. Was he advocating violence? No. He was expressing unpopular opinions and backing them up with considerable research.

Yet a call for murder by a visiting Israeli columnist produced no reaction at all from our moral guardians. Joseph Lapid said on CTV's "Canada AM" he hoped there would be a decent Jew somewhere who could kill Victor Ostrovsky, the (Jewish) author of a blockbuster of a book [By Way of Deception] on the murky doings of the Mossad, the Israeli intelligence agency. (Ostrovsky is a resident in Canada.) Unlike Irving, Lapid can come back to this country any time.

Most astounding of all was the John Tillman case, since the man had merely written a private letter to a rival politician. In 1990 Tillman complained to the Nova Scotia Human Rights Commission about not getting employment. He said he had been discriminated against because he was a white male. The complaint was dismissed by Joel Matheson, later a Tory candidate in the 1993 election.

By the time the election was held Tillman had become a Reform party campaign manager, and on Matheson's defeat his letter to Matheson contained these words: "If I was a woman, or belonged to a visible minority group, then you would no doubt have bent over backwards for my cause. But since my gender and race put me at the bottom of the human rights totem pole, you felt quite safe in throwing my case out ... The Reform party defeated you in last night's election [by letting the Liberals in] ... Gone are the days of catering to radical women's groups, minority groups, etc. Gone are the days of protecting these and other parasites of society ... "

Tillman was denounced by the Canadian Advisory Council on the Status of Women and by the Atlantic Jewish Council. The local media fingered him as a racist. The Reform party expelled him. The head of the Human Rights Commission, one Bridgial Pachai, sent the letter to the police for investigation as a "possible incitement to hatred under the Criminal Code." Such is the state of freedom in The True North Strong and Free.

Oh, I nearly forgot. In November Miss Kulaszka phoned to ask whether I had had any trouble with the hate industry. "Not yet," I replied. Two days later the B.C. Human Rights Council announced it would be proceeding against me on a complaint from the Canadian Jewish Congress.

In a democracy, people are supposed to be able to read what they want to read and say what they want to say, provided they are not inciting violence. In fact, it is dangerous to deal with issues that powerful pressure groups do not want discussed. That's why we have the hate laws and human rights Gestapos, plus book-bannings that in essence are no different from the Nazi book-burnings of the 1930s. There was one thing to be said for the Nazis, though. They did their book burning in public. We do it secretly.

Thus, a well-researched book about a man whom Jewish organizations love to hate has been banned from our sacred shores on the grounds that it is "hate literature." The Case for David Irving, written by Nigel Jackson, an Australian teacher, should be read by everyone who is interested in freedom of speech and the cowardice of politicians. [Available from the IHR for $19, postpaid. (Check www.ihr.org for current availability and price; ed.)] The research is meticulous and the "hate" in it is the story of what Irving's opponents have been able to do. I have a copy. But if you want one you will have to have it smuggled in. To such depths have we sunk, 50 years after winning a war for "freedom."

Irving is, of course, the most controversial living historian, and the gutsiest. My emotions tell me to pick holes in some of his stuff, especially where his views on Winston Churchill are concerned. But he is a great writer who has written some brilliant books, like the one on Hermann Göring. And there is nothing "pro-Nazi" about it. You get Göring, warts and all.

As Jackson puts it, Irving "is indefatigable in his pursuit of primary sources." True. When I met him a few years ago in Washington, DC, he was burrowing away in the archives for new material, as usual. He condemned himself to a sort of Siberia, however, when he challenged the six million story and the alleged mass gassing program of the Nazis. Not that he denies that atrocities took place. On the contrary. It also didn't help that he testified for the defense in the second Zündel trial. So the lobbies went after him.

But whenever his critics dare to challenge him face to face, he makes mincemeat of them. David Frost and a crew of hostile academics once tried it on TV and were swallowed whole. Such people now know better and will not take him on. But in trying to silence him, they confirm that he has a case.

Here is a short list of the actions taken against him:

His expertise is formidable. In 1982, he was the first to denounce the so-called Hitler diaries as forgeries, even though Lord Dacre [Hugh Trevor-Roper], the Regius Professor of History at Cambridge and an expert on the Nazi period, had said they were genuine. He was also one of only two men who could transcribe Goebbels' diaries when they were found in Moscow.

He has been libelled and turned into a hate figure by lickspittle media folk and by those who have something to lose if their version of history is challenged. Author Jackson compares Irving to Alexander Solzhenitsyn, who also ran up against an Establishment. And he quotes the famous German playwright Rolf Hochhuth as saying: "We may not like what he writes. But historians a hundred years hence will find it impossible to ignore the works of David Irving."

Pity you are not allowed to read this book. But the Director of Prohibited Importations say it wouldn't be good for you. Did you know we have such an Orwellian department? We do.