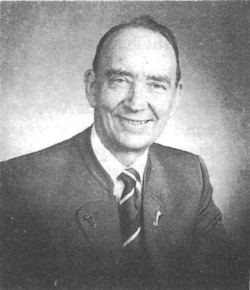 Hans Schmidt, a US citizen and German-American civil rights activist, was arrested by German police on August 9, 1995, in Frankfurt, and has been held in prison ever since because of a remark he made in an open letter sent from the United States to an official in Germany.

The 68-year-old German-born retired businessman was in Germany on a private visit to see his elderly mother. He was taken into custody at the Frankfurt airport just as he was about to board a plane to return home to Florida.

Schmidt was held on a charge of violating Germany's "popular incitement" law – a legal catch-all used to suppress "politically incorrect" dissidents. According to the arrest warrant, Schmidt is "strongly suspected" of violating criminal code section 130 (I, 2) by having "attacked the human dignity of others in a manner likely to disturb public peace by insulting and maliciously bringing contempt to them." If convicted, he could face up to five years imprisonment.

Born in Germany in 1927, Hans Schmidt came of age in the Third Reich, and was a Hitler Youth leader. He served as a teenage Waffen-SS soldier during the final months of the war, participating in the December 1944 "Battle of the Bulge." After hospitalization for frostbite, the young corporal returned to duty on the eastern front, where he was wounded twice. He was taken prisoner by American forces.

He emigrated to this country in 1949 and became a United States citizen in 1955. Four brothers and a sister likewise migrated to the US, two of whom voluntarily served with the US Army.

After education that included courses at City College in New York and at the University of Chicago, Hans Schmidt pursued a successful career in the restaurant business and in manufacturing until his retirement in 1978. He has two grown children. Since early 1994 he and his wife have made their home in Pensacola, Florida.

Schmidt has been a courageous and outspoken voice in defense of German and German-American rights and interests. He founded, edited and published two hard-hitting newsletters: the English-language GANPAC Brief and the German-language USA-Bericht.

He has relentlessly opposed what he regards as the betrayal of German national interests by Germany's political and public opinion leaders. He has outspokenly denounced the distorted, one-sided portrayal of twentieth century history, particularly through the Holocaust campaign. Schmidt has been a good friend of the Institute for Historical Review, and has attended several IHR conferences.

He founded and for years served as chairman of the German-American National Political Action Committee (GANPAC), an organization dedicated to protecting the rights and furthering the interests of America's single largest minority ethnic group. In 1985 his office in Santa Monica, California, was damaged in an obviously politically-motivated attack.

Schmidt was detained on the basis of an arrest warrant (Haftbefehl) issued on March 28, 1995, by a judge in Schwerin. This was superseded by a second arrest warrant issued October 5.

Schmidt's "crime" was that he mailed a copy of his USA-Bericht newsletter to Rudi Geil, a member of the upper house (Bundesrat) of Germany's parliament, at his home in Schwerin. In this newsletter Schmidt published an open letter he wrote in response to an article in the liberal weekly Die Zeit. Affronted by what he read in this letter, Geil complained to the legal authorities, who issued a warrant for Schmidt's arrest.

The alleged crime was committed on November 9, 1994, the day Geil received the newsletter. Interestingly, this was the fifth anniversary of the 1989 breaching of the Berlin Wall, as well as the anniversary of Hitler's failed "Beer Hall Putsch" in 1923 and the "Crystal Night" anti-Jewish outburst of violence in 1938.

The offending portion of Schmidt's open letter is contained in the following passage:

My God, what were people like you really thinking? It was the Left, the anarchists, the Jew- and Freemason-infested ["juden- und freimaurerverseuchten"] political system, along with the controlled press, which have for decades hunted down everything national: brutally, intolerantly, relentlessly and hatefully.

According to the arrest warrant:

The expressions 'Jew-infested' and 'Freemason-infested' are directed against these two population groups in Germany. They represent a form of insult or malicious contempt against these groups, and finally also violate the human dignity of the other members of these groups.

Detention is ordered because of the danger of flight. The accused is a US citizen, has his primary domicile and permanent address in the United States ... Therefore it must be assumed that the accused will not voluntarily make himself available for criminal court proceedings in the Federal Republic of Germany. Extradition of the accused for the purpose of criminal prosecution is not possible because he is an American citizen. Moreover, because the action is not punishable in the United States, it is not possible to transfer the case to American authorities, nor can legal assistance be obtained through order of a German court.

There is already an especially strong possibility of flight because of the severity of the possible sentence prescribed by criminal code section 130, that is, three months to five years imprisonment ...

Under these circumstances, investigative detention [Untersuchungshaft] is appropriate...

Given Germany's treatment of other "thought criminals" in recent years, Schmidt's prospects are not bright. For six weeks he was held virtually incommunicado. One German judge has already declared that he is convinced of Schmidt's guilt, and German newspapers have reported virtually nothing of the case.

As Schmidt's arrest once again shows, Jews enjoy a preferential status in today's Germany, defended by the mass media and protected by legal measures such as the selectively enforced "popular incitement" law. While demeaning remarks about Jews bring swift public and legal censure, offensive remarks about Americans, Swedes, Italians, Catholics or even Germans are neither condemned or punished.

What makes the Schmidt case so remarkable is that, for the first time ever, an American citizen is being held for What he wrote, in a mailing from the United States, for an expression of opinion that is entirely lawful in this country and in most of the world's nations.

American political leaders are often quick to condemn certain foreign regimes for human rights violations. Speaking in the name of the US government at the United Nations Women's Conference in China, Hillary Clinton passionately defended freedom of speech around the world. In her September 6 address she said:

Freedom means the right of people to assemble, organize and debate openly ... It means respecting the views of those who may disagree with the views of their governments. It means not taking citizens away from their loved ones and jailing them, mistreating them or denying them their freedom or dignity because of peaceful expression of their ideas and opinions.

Pointing up a crass double standard, Clinton administration officials have been silent about the Schmidt case, offering the excuse that it is a German "internal matter." Imagine the reaction if, for example, an American tourist in China were to be arrested because he had once vilified Communism in a letter to a Chinese official, or if an American were to be imprisoned in Saudi Arabia because he had once made disparaging remarks about Islam in a letter mailed to someone in that country.

Last June entertainer Michael Jackson came under fire from Jewish groups because of some anti-Jewish words in a new album, "HIStory Past, Present and Future, Book 1." He sings "Jew me, sue me" and "kick me, kike me" in the song "They Don't Care About us." (Bowing to pressure, Jackson later agreed to replacing the offending words.) Imagine the outraged response of American officials if the gloved entertainer were arrested during a tour of Germany and thrown into jail there on a charge of "popular incitement."

In his book Legends of Our Time, Holocaust writer EHe Wiesel wrote that "every Jew, somewhere in his being, should set apart a zone of hate – healthy, virile hate – for what the German personifies and for what persists in the German." Any chance that Wiesel might be thrown in jail during a visit to Germany?

In a May 1989 speech, Edgar Bronfman, president of the World Jewish Congress, called the people of Austria "dirty, anti-Semitic dogs" for their refusal to renounce Kurt Waldheim as President. Even though these widely quoted words "represent a form of insult or malicious contempt" against Austrians, Bronfman is treated with honor and even deference when he visits Germany.

In a barrage of letters to German officials and journalists, in newspaper advertisements, and in leaflets, American civil rights activists are speaking out against the treatment of Hans Schmidt. On August 22, for example, a small group of citizens picketed the German Consulate in New York City, and distributed handbills demanding freedom for Schmidt. A quarter-page "Travelers Alert" advertisement placed in a California daily paper by an IHR supporter protested the Schmidt arrest, and warned Americans planning a visit to Germany that they risk arrest and imprisonment there if they have expressed "politically incorrect" views.

The Schmidt case is an important milestone in the German government's on-going campaign to stamp out dissident, nationalist voices. It points up the bigotry and hypocrisy of both the German and US governments, which violate the principles they so loudly proclaim. It has potentially profound consequences, not only for Germany but for the United States and the rest of Europe as well.

"Of those to whom much is given, much is required. And when at some future date the high court of history sits in judgment on each of us, recording whether, in our briefspan of service, we fulfilled our responsibilities to the state, our success or failure, in whatever office we hold, will be measured by the answers to four questions:

Second, were we truly men of judgment, with perceptive judgment of the future as well as the past, of our own mistakes as well as the mistakes of others, with enough wisdom to know what we did not know, and enough candor to admit it?

Third, were we truly men of integrity, men who never ran out on either the principles in which we believed or the people who believed in us, men whom neither financial gain nor political ambition could ever divert from the fulfillment of our sacred trust?

Finally, were we truly men of dedication, with an honor mortgaged to no single individual or group, and compromised by no private obligation or aim, but devoted solely to serving the public good and the national interest?

Courage, judgment, integrity, dedication – these are the historic qualities ... which, with God's help ... will characterize our gevernment's conduct in the ... stormy years that lie ahead."
—John F. Kennedy, Speech to Massachusetts State Legislature, Jan. 9, 1961