Fraudulent Holocaust claims about magical gas chambers and miraculous survival in wartime German camps are all too familiar. Occasionally, though, we come across a claim so breathtaking in its mendacious effrontery that it deserves special notice.

In an article (reproduced here) in The Gazette of Montreal (Canada), August 5, 1993, and in a memoir, Moshe Peer recounts his wartime ordeal as an eleven-year-old in the Bergen-Belsen concentration camp. Peer claims that he “was sent to the [Bergen-Belsen camp] gas chamber at least six times.” The Gazette account goes on to relate: “Each time he survived, watching with horror as many of the women and children gassed with him collapsed and died. To this day, Peer doesn’t know how he was able to survive.” In an effort to explain the miracle, Peer muses: “Maybe children resist better, I don’t know.” (These days, not a single reputable historian claims that anyone was ever “gassed” in the Bergen-Belsen camp.)

How was such horror possible? In Peer’s view, the “rest of the world stood by and let the Holocaust happen.” The evil Germans, he says, “had the permission of the world” to kill Jews. Although Peer claims that “Bergen-Belsen was worse than Auschwitz,” he acknowledges that he and his younger brother and sister, who were deported to the camp in 1944, all somehow survived internment there. 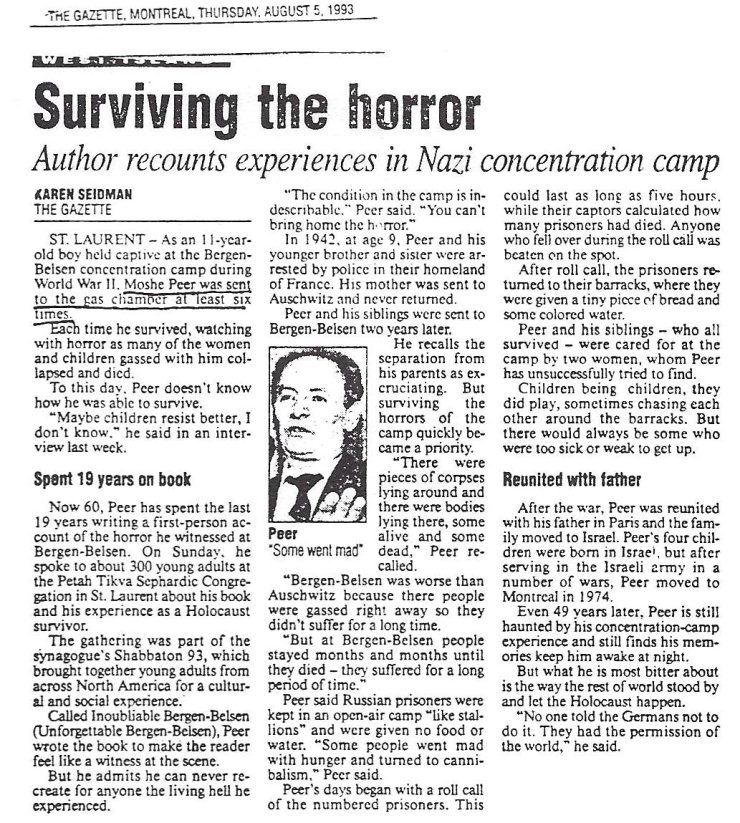