This book, written by leading revisionists worldwide, in honor of Robert Faurisson, gives ample and sympathetic treatment to this man who has been a “guiding light” for revisionists and has suffered much for his principles. Exactitude is an excellent title, giving Faurisson’s regard for accuracy without emotional distortion. The writers concede that Rassinier was the man who was the father of revisionism, but Faurisson provided principles to build on his foundations. Nevertheless, Faurisson gives tribute to his fellow revisionist:

It is an act of generosity and integrity to acknowledge the contribution of a fellow “laborer in the vineyard,” and Faurisson does so. 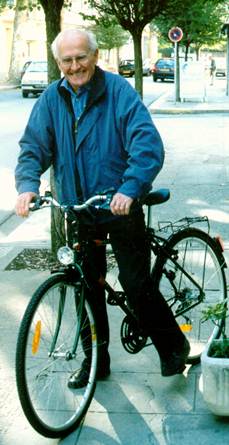 Some of Faurisson’s concepts have an elegant simplicity: “show me or draw me a gas chamber” draws attention to fundamentals that can be neglected in more elaborate theories.

His quip “no holes, no holocaust” undermines the allegation that the demolished remains of Crematorium II in Birkenau have holes through which Zyklon-B pellets could be poured.

The modern saying: “Keep It Simple, Stupid” (KISS) emphasizes the need for simple ideas on which more complex understanding can be built. These basics are the foundation stones on which buildings can be constructed, and the more elaborate the structure, the more solid the foundations must be. Faurisson has never lost sight of this, and he has conveyed this to his pupils.

Faurisson functions mainly as a “facilitator” of other peoples’ research and is not just a lone researcher. If it were not so, he would be “a voice crying in the wilderness.” His work is synergistic because he has inspired other people to follow his example. He cannot be judged by his own work alone, but also, like a good teacher, by those he has inspired to carry on the work

All the contributors acknowledge Faurisson as mentor, one who can be personally amicable but hard on sloppy thinking and emotional appeals that cloud “hard evidence.” He has a feeling for the physical situation, trying to visualize how the claimed “gas chambers” would have worked in practice, and rejects emotional appeals based on lurid fantasies. This approach is one that has appealed to a variety of individuals.

Dr. Christian Lindtner writes an excellent introduction championing free inquiry as part of a liberated and wholesome state of mind, unchained by superstition, but aware of the struggle it takes to correct the multitude of false beliefs and thus tolerant of others’ difficulties in climbing out of the intellectual mire. It is true, as he says:

“who, apart from a very small minority, cares about radical freedom for the mind, after all?” (p. 10)

This minority makes breakthroughs which most people will misunderstand or reject, but this is the (heavy) price of progress.

Dr. Lindtner writes a chapter claiming that Buddhist ideals underlie the New Testament Gospels and suggests that the Greek language of the Gospels is derived from Sanskrit originals, a revisionist thesis bold enough to face an uphill battle for acceptance from theologians, although he is less likely to be imprisoned and accused of “anti-Semitism” for this viewpoint. His thesis is unpopular but less hazardous than those querying the “Holocaust.”

Dr. Arthur Butz is the author of the classic The Hoax of the Twentieth Century, which covered the essentials of the Holocaust story in lucid prose (now issued in a revised edition with a new preface). He pays homage to the continuing inspiration of Faurisson, recognizes the extent of his ongoing contribution, but calls for more adequate understanding and compilation of his work. This is less of a problem now that Faurisson’s work for 1974-1998 has been issued in French in four volumes (awaiting translation?).

Reality itself is multi-faceted, and each contributor to this volume has something distinctive to offer. A picture is worth a thousand words, so Germar Rudolf is right to enliven us with cartoons that say more than words alone. Maybe most powerful is the sketch of the lone revisionist “black sheep” going against the tide of sheep who rush forward to plunge, lemming-like, to their destruction (p. 104) symbolic of where our society is headed.

Carlo Mattogno writes how Faurisson helped inspire Italian revisionism and states that “Faurisson’s significant contribution has been to supply (revisionism) with a method and a scientific base” (p. 61). This Italian writer welcomes individual clashes among individual revisionists as a sign of healthy dissent, without which revisionism would become ossified. Carlo Mattogno and Germar Rudolf have made significant contributions to improving the Leuchter Report, itself a pioneering work recommended by Faurisson, but which requires “fine tuning” to satisfy “exactitude.”

Revisionists, as a minority, have to face the opposition of imposed majority opinions, not limited to the “Holocaust.” Carl O. Nordling mentions some accepted “dogmas” that have become so well established that dissent is difficult, such as the “Big Bang” theory among astronomers; the general rejection of the possibility that someone else wrote “Shakespeare”; academic acceptance of Margaret Mead’s false “sociology” about the “promiscuous” life of Samoans; and he suggests that despite historians’ image of Stalin as “peacemaker,” Stalin signed a “Peace Pact” with Hitler to mislead the German leader into believing that there would be no war over German invasion of Poland, since Hitler thought England and France would not declare war without the support of Russia. Stalin nevertheless operated in the full knowledge that German invasion would lead to war and that, as the combatants became exhausted, Stalin could invade Europe to seize it without much resistance. Dr. Nordling’s thesis on Stalin is strengthened by recent writings showing that when Hitler invaded Russia it was to forestall a pre-emptive strike by Russia which he knew was coming.

Dr. Toben is the contributor that I personally know the best, and his penchant for philosophy and scientific analysis shines through. A disciple of Immanuel Kant’s Categorical Imperative, Dr. Toben advocated it despite the attempt of an opponent, Jeremy Jones (the Jew with the “goy” name), to substitute Categorical “Hurt Feelings.” He speaks against a Cartesian mind-body split and wants to unify both into an integrated whole as part of his method, combining it with Faurisson’s “exactitude.” He combined the theoretical with the practical when he scrambled under the ruins at Birkenau, in vain, to see if the missing “holes” could be found. Dr. Toben knows that slavery of the mind is as pernicious as slavery of the body. He says: “any thinking person is a revisionist.” (p. 121). But one must be free to think.

Ernst Zündel wrote from his prison cell to announce that he became a “Faurisson disciple” and remained one. Considering that at the time when he wrote his essay Zündel had been held for more than a year without charge, with threats to his health, and reduced to writing with a pencil stub, his tone is remarkably jaunty and indicates that his head is bloody but unbowed and he retains his respect for his mentor. Robert H. Countess documents the significance of the Zündel case.

A man such as Robert Faurisson who can inspire such influence and respect from such a variety of different individuals worldwide must indeed be extraordinary. He is an illustration of the fact that one person can make a difference, if he can inspire other people to follow his lead. He put the “vision” in “Revisionism.” And without a vision, revisionism will perish.