We Met Jeffrey Epstein over a Hundred Years Ago
by N. Joseph Potts
Published: 2019-09-06 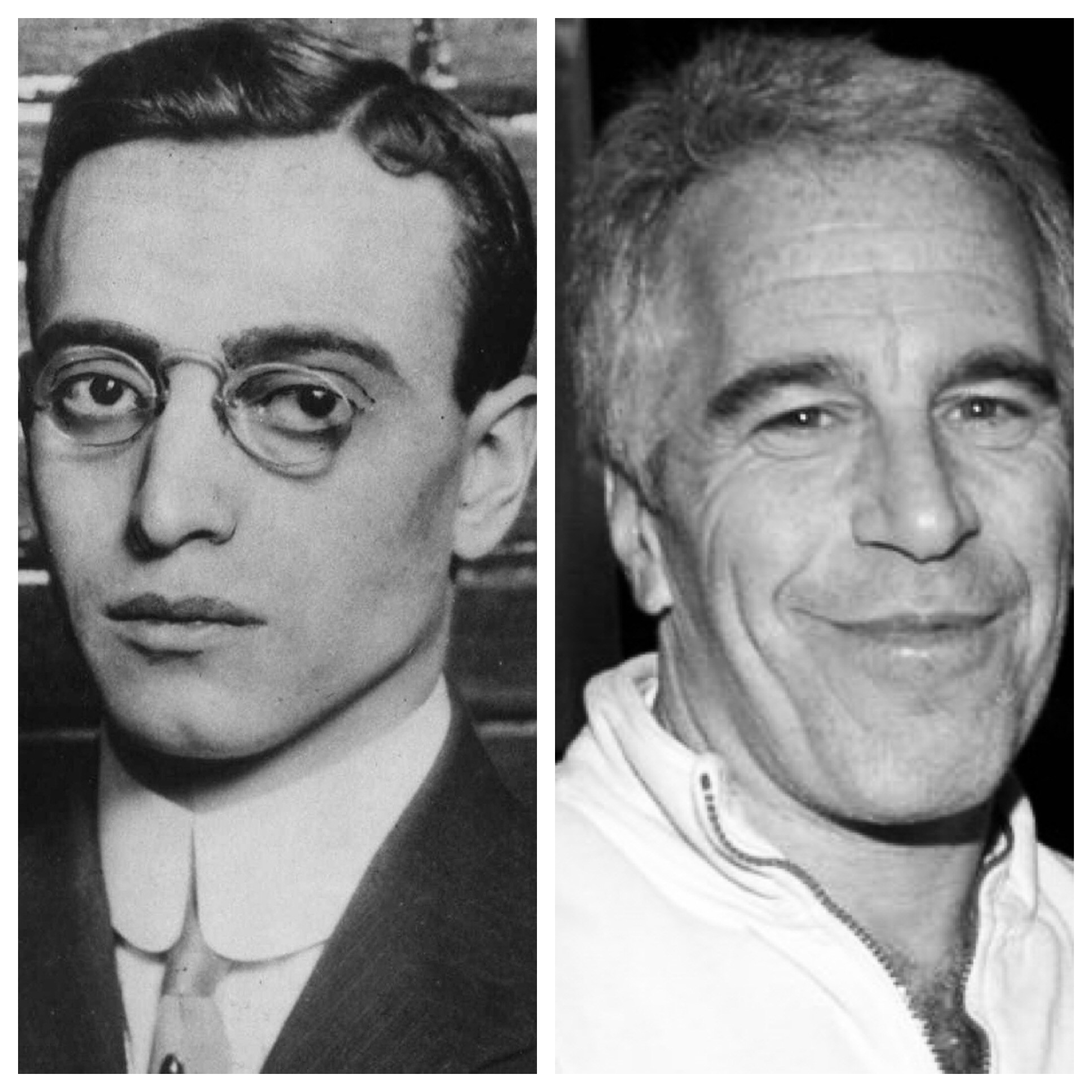 The death in jail of Jeffrey Epstein last month recalls a very famous death of another jailed Jewish man charged (and convicted and sentenced) of crimes against a 13-year-old girl in 1913. That case, which involved only one of many rumored similar victims, involved the lethal abuse of a factory worker named Mary Phagan by the manager of the factory, 29-year-old pillar of the Atlanta Jewish community Leo Frank, who, having grown up in Brooklyn, might have seemed rather a “damn Yankee” to at least some of his neighbors of 106 years ago. Frank’s victim, unlike any of Epstein’s known victims, was murdered and, while Frank was tried and convicted and sentenced to death, his guilt continues to be vigorously contested this more-than-a-century later, by the successors to the massive and distinctly Jewish campaign to win his exoneration of the offense.

The two cases, while they have many and important differences, both involve Jewish men accused of raping[1] underage teenage girls as well as large and enduring campaigns of national stature to secure the acquittal of the defendants. In Frank’s 1913 case, America’s (then-smaller, but already powerful) Jewry mobilized to support his exoneration, stimulated by the notion, perhaps manufactured among the larger and more-influential Jewry of the northern United States, that Frank was being discriminated against because he was a Jew in the South, whose Jewish population was then less-influential than that of their co-religionists to the north (Frank was, in any case, a “child” of the North, having grown up in Brooklyn). The establishment of the Anti-Defamation League in October 1915 is widely credited to the (Jewish) outrage at Frank’s lynching in August of that year.

Epstein’s case entailed a “conviction” and a much-diluted “prison sentence” in what now might be called its first phase, one that might reflect his vastly greater influence (read: wealth) over the juridical apparatus, and no doubt because no one had been found murdered. Frank’s case had only one phase (including appeals that went all the way to a petition to the US Supreme Court), but of course did involve a murder, one the guilt for which satisfied all the jurors on his case, but has never satisfied the jury of “public opinion” as mediated by media firmly controlled by parties sympathetic to, if not Frank’s innocence, then at least to his ethnic affiliation.

Frank did not have the means to mount the monumental defense that eventually rose to his succor, but Jewish moguls of the day such as Albert Lasker saw to it, through vigorous fund-raising campaigns conducted throughout Jewish communities in the North, that his justice was indeed the best that money could buy. Epstein had no need of any such circling of the financial wagons; he was a billionaire in his own right, but in view of his ability to purchase his defense in the open market, nonetheless Jewish legal luminaries such as Alan Dershowitz figured large in the phalanx ultimately mustered to defend him in the 2016 Florida case that led to his sentence to 13 months’ “confinement” in a minimum-security prison near his palatial estate in Palm Beach. Some of these lawyers, such as Dershowitz, stood among those who might have been implicated in the crimes committed by, or through the connivance of, Epstein.

Among those ensnared in Epstein’s fiendishly woven net was the United States Attorney for Southern Florida Alexander Acosta, who arranged for Epstein’s convenient conviction on a Florida State charge. Later appointed secretary of labor by President Donald Trump, he subsequently resigned under fire after Epstein was again arrested in July 2019 by the United States Attorney for Southern New York, the locus of yet more of the crimes with which Epstein was charged, all of these involving underage teenage girls.

Epstein’s guilt is not contested, neither as to the ages of his victims, nor even really as to their numbers (apparently something in the dozens). Neither Epstein nor any of his co-conspirators is implicated in any murder. Frank’s guilt, at least of the murder of Mary Phagan, continues to be very much contested by, among others, the ubiquitous Alan Dershowitz—yes, the very same Harvard Law School professor who has for many years now led the star-studded legal team defending Jeffrey Epstein, the Twenty-First Century’s answer to Leo Frank. Naturally, the metaphorical child of the Frank case, the Anti-Defamation League, continues to beat its very loud drum to advance the cause of Leo Frank’s innocence even to the point, in 1986, of securing a posthumous pardon from the state of Georgia, issued as an apology for having failed to protect its notorious inmate at its prison in Milledgeville in 1915.

Frank’s lynching was the first and last lynching of a Jew recorded in the annals of American lynching. American Jewry had, over the two years preceding it, made the case a cause célèbre, not least in the media, which, even at that early time, were controlled by Jewish interests not only of ownership, such as Adolph Ochs’s New York Times, but through the massive and pervasive influence of large-scale advertisers such as merchandiser Alfred Lasker, whose tentacles reached into the hearts of virtually every newspaper large and small in the United States. Lasker, having taken the cause very much to heart, became the unofficial leader of the campaign in Frank’s behalf, a campaign that may be said to have continued vigorously today well into its second century.

The Epstein case, unlike the Frank case, did not become a “Jewish” issue despite the Jewishness of Epstein, Epstein’s “patron” Les Wexner, Dershowitz and many of Epstein’s other defenders. Indeed, Epstein did not, as Frank did with some distinction, take part in Jewish religious affairs beyond hobnobbing with ex-prime ministers of Israel and the like. But the ethnic commonality among Epstein and other Jewish men such as Harvey Weinstein and Leon Wieseltier was the subject of a recent article by ex-Jew Gilad Atzmon in the Unz Review, volubly countering this non-ethnic quality of l’affaire Epstein. However, the non-ethnicity of the matter has seemingly left the ADL out of this reprise of the case that brought it into existence 104 years ago.

Leo Frank was not, as Jeffrey Epstein was, rich (although his wife did come from a wealthy family), so he could not, as Epstein easily did, fund his own high-powered team of defense lawyers. But Frank did indeed enjoy a powerful defense team easily comparable to the one marshaled around Epstein. It was funded by Alfred Lasker and a nationwide fundraising campaign conducted largely through Jewish auspices such as synagogues and chapters of the B’nai B’rith, of whose Atlanta chapter Frank was president. Indeed, Frank’s team’s successors have managed within the past year to establish Georgia’s first Conviction Integrity Unit, which has taken on local closed cases such as that of convicted murderer Wayne Williams, along with a posthumous one, that of Leo Frank, with full exoneration in view. Unlike also-pardoned ADL beneficiary Marc Rich, Leo Frank’s supporters haven’t made large donations to foundations of American presidents, but smaller donations to the foundations and political-campaign funds of Georgia and Fulton County politicians may produce the desired effects quite handily. No relatives of Leo Frank are to be found among the public advocates of this campaign, nor any descendent of anyone who knew him. Relatives of Mary Phagan, however, oppose the initiative.

Assuming, as is widely done, that Epstein was murdered in jail á la Lee Harvey Oswald, to keep him from dishing the dirt on many powerful people, Frank’s death at the hands of a lynch mob that had extracted him from jail would appear to have been committed on other considerations, notably his Jewishness as continually asserted this past century or so by the ADL, his supporters, and their latter-day successors such as Alan Dershowitz.

But that idea also is contested, notably by the Historical Research Department of the Nation of Islam, publisher and author of record of The Secret Relationship between Blacks and Jews Vol. 3, the Leo Frank Case. This work (long since banned by amazon.com) advances the proposition (pp. 309-330) that the lynch mob was covertly orchestrated by the same (Jewish) parties who had supported and defended Frank’s innocence in the two years preceding the lynching. Why would these same partisans now wish their beneficiary dead?

Because he might confess. He was alive, in keeping with their wishes, but still incarcerated, very much against their wishes, if only because there, he might be subject, á la Rudolf Höss[2] of Holocaust fame, to coercion, or even inducements, to confess to the crimes of which he was accused. This would certainly never do. In fact, Frank nearly died in his cell, as Epstein did in his, after a fellow inmate cut his jugular vein with a butcher knife about one month after the commutation. Perhaps the would-be murderer was committing a din rodef[3] murder in behalf of Jewish paymasters not unlike those said to have commissioned Jeffrey Epstein’s death.

Two months elapsed between Governor Slaton’s commutation of Frank’s sentence and the lynch mob’s carefully arranged transits by car of 150 miles over unpaved roads from Marietta to Milledgeville, where they picked up their hapless victim, and then back again to Marietta, chosen because it was the hometown of poor Mary Phagan. None of the (well-known) participants in the lynching was even charged with the murder of Frank, much less prosecuted.

One wonders if, a hundred or so years from now, the ADL will secure the exoneration of Jeffrey Epstein.

Yeah. Those girls were all party-crashing gold diggers. Epstein just got the rap because he was Jewish.

That’s right. Just because he was a Jew.

[1] As raping is legally defined. In most of the United States today, the legal age of consent is 18. Sexual relations with a person younger than that age is called “statutory rape,” intended to cover cases in which the victim gives her consent.

[2] Höss’s Commandant of Auschwitz (Weidenfeld & Nicolson, 1959), written while he was in jail, is a pillar of today’s regnant Holocaust narrative.

[3][3] Din rodef is a Talmudic concept holding that it is permissible—indeed, required—to kill a person whose continued life threatens the life, or reputation, of a Jew, or, as in Frank’s case, the Jewish community en grosse.