Mistress Sara Bloomfield of the USHMM and the Codoh Campus Project

Ms. Sara Bloomfield, Mistress of the mighty United States Holocaust Memorial Museum, has sent an appeal nationwide asking for donations to “Confront Holocaust Denial.” Mistress Bloomfield singles out the work of Bradley Smith and CODOH to establish, yet again, how the publication of simple advertisements in student newspapers puts at risk everything her monumental Holocaust-promoting institution is dedicated to serving.

“The rising tide of Holocaust denial is starting to infiltrate our academic institutions. Every year, our Museum sponsors dozens of lectures and seminars on college campuses, including workshops to train future teachers in the most effective ways to bring the truth [ya think?] about the Holocaust to new generations of students.

“Last spring, one vocal denier published ads in student newspapers at three universities hosting our teacher workshops [I confess—it was me] and sent hate-filled letters to students and administrators, one of which called our programs ‘a parody of history dressed up in the righteous trappings of Holocaust Education.’”

The letter containing this quote was written by our associate, David Merlin, a man with a real insight into the “truth” as it is being forwarded by the USHMM. At the same time, it is interesting to note that Mistress Bloomfield does recognize a good turn of revisionist phrase when she reads one. 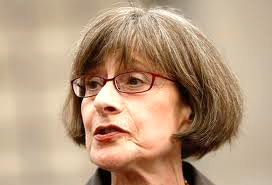 The lady goes on:

“As our nation's young people go back to school, it is absolutely critical that we do everything in our power to educate them about the difference between free speech and hate speech.”

CODOH is in perfect agreement with Mistress Bloomfield here. I look forward to working with the lady. I have already taken the first small revisionist steps in our upcoming cooperation via student newspapers at University of Southern California and California State University at Northridge. More about that below.

“I wish I could tell you these are isolated incidents,” Mistress Bloomfield writes, “but they are part of a disturbing trend highlighted by the US State Department's recent report of a global surge in antisemitism‘manifested in Holocaust denial, glorification, and relativism.’”

Is this good news or what? Not for the lady perhaps, but for us?

“Our educational programs are more important than ever to combat rising hate, but they are expensive to maintain. During this back-to-school season, we have set a goal of raising $20,000 to cover the cost of one teacher training workshop in the coming year.”

Twenty-thousand dollars to pay for one three-day teacher training workshop to teach a parody of history dressed up in the righteous trappings of Holocaust Education? These three-day workshops must be real blow-outs.

On Mistress Bloomfield’s USHMM Website there is one page devoted to what it calls “Holocaust Denial Timeline.” There are 31 entries in the USHMM Timeline that stretch back 70 years to 1942 and list what the Museum terms “key events in the evolution of Holocaust denial.” The last entry in this 70-year time line reads:

“2010: Bradley Smith places his first online Holocaust denial advertisement, which appears on the website of the University of Wisconsin's Badger Herald in February. The Internet—because of its ease of access and dissemination, seeming anonymity, and perceived authority—is now the chief conduit of Holocaust denial.”

And now we have this new pitch from Mistress Bloomfield to raise funding for her Monumental Museum where she still sees Smith (who am I?) as a primary danger to her way of life. Why me? Because I go to a place where it is a norm, oftentimes honored in the breach but yet a norm, to honor the ideal of encouraging a free exchange of ideas while Mistress Bloomfield and her intellectual Arts Center people promote the opposite—must promote the opposite or they are finished. While students may not often reveal their interest in Smith or revisionism on campus, they are very much willing to go to the Internet, to Codoh, and privately read, search, question, and participate in a new media-world where it is impossible to smash free inquiry.

[NOTE: Here we begin to forward the Campus Project, encouraged by the attention given us by Mistress Bloomfield. This letter was copied to 1,160 academics, student organizations and administrators at USC.]

I have here your good opinion piece “Students must fight for free speech” dated 27 August.

The Trojan has now refused to accept a text link advertisement I submitted that reads: HOLOCAUST HISTORY: The Issue of Academic Conformity. We are informed that the decision to reject the link was made by Trojan “advertising managers.”

In the case of The Trojan, our text link leads to a talk I gave at the Holocaust Conference in Teheran in 2006 titled: The Irrational Vocabulary of the Professorial Class with Regard to the Holocaust Question. But why was the link rejected? No specific criticism of the text is offered.

You write that The Red and Black board pushed to have a professional adviser become the editorial director, which would give individual prior review on what the paper publishes. You appear to agree that that is not right. At The Trojan, advertising “managers” play the role of editorial directors and that is accepted.

You write that journalism isn’t public relations, that journalists are not there to serve as propaganda machines and to simply regurgitate positive news about institutions.

You quote George Orwell: “Journalism is printing what someone else does not want printed: everything else is public relations.”

Who is it who does not want my talk on The Irrational Vocabulary of the Professorial Class with Regard to the Holocaust Question to be read? Organizations such as the Anti-Defamation League of B’nai B’rith, and Hillel, The Foundation for Campus Jewish Life lead the charge. See their 9,000-word Manual directed at convincing student journalists why you should publish nothing about academic conformity regarding the Holocaust Question that does not work as good public relations for ADL and Hillel and the academic community at USC that is committed to the suppression of a free exchange of ideas on the question before us.

You write that journalists, whether they are students or otherwise, should never have to fight for freedom of the press. But since they do, it is good to know that they don’t stand back and let others trample over them.

The staff at The Daily Trojan has just been trampled good and proper. How does it feel? How would it feel to Fight for Free Speech?

[NOTE: This text was copied to 460 student orgs, faculty and administrators at CSUN after my submission of a text link advertisement was rejected out of hand by the student newspaper, The Sundial. ]

CSUN STUDENTS !!!
DO YOU UNDERSTAND THAT YOU ARE BEING ASKED TO LIVE IN AN INTELLECTUAL DUNGEON?

That there are historical questions that your academic “Managers” do not want you to have access to? That the guardians of intellectual conformity at CSUN protect you from a free exchange of ideas as if you were mere children?

On August 28, 2012, Bradley Smith of CODOH, Committee for Open Debate on the Holocaust, submitted a text link to run in The Sundial. The link reads:

The URL leads you to the text of the talk Smith gave at the Holocaust Conference in Teheran, Iran, in 2006 titled “The Irrational Vocabulary of the American Professorial Class with Regard to the Holocaust Question.” See: http://codohfounder.com/ It is a talk that Iranian students were free to listen to and to talk about openly. Not you, however.

That URL never reached you. Nicole Maddocks, advertising account executive, informed us that her “Managers” had instructed her to reject the ad. They would not say why. They would not reveal what language, what words, offended their intellectual standards. We would like to know what language there is in the text of this talk that would destroy the minds and the spirit of CSUN students. Specifically. Can you help? Can you help yourselves?

When next you see the light of day—they do let you out long enough to pay your tuition, don’t they?—I hope you will ask Ms. Maddocks who her “Managers” are so that you can ask them why you can NOT see that little ad. What does it link to that Sundial “Managers” do not want you to see, to discover?

Once you know who her “Managers” are, get in touch with them, tell them you are (almost) grown, that you are old enough to vote, to join the military and kill Muslims anywhere in the world at the direction of the State, and that you believe you can be trusted to separate the wheat from the chaff regarding even such matters as the Holocaust question.

Ms. Maddock’s “Managers” are unlikely to change their minds and allow The Sundial to publish Smith’s little ad. Her “Managers” have their own “Managers.” They include such folk as The Jewish Anti-Defamation League of B’nai B’rith and Hillel, The Foundation for Jewish Campus Life. Take a look at the 9,000-word Manuel ADL and Hillel have published directing Hillel students and others on how to suppress intellectual freedom in the campus press nationwide. See: http://tinyurl.com/-ykopqw8

If you can’t get Smith’s link from The Sundial, look for it at my table near the Library. I am a friend of Bradley Smith and will be a source of information that the “Managers” at The Sundial, and in your classrooms, do not want you to have access to—a free exchange of ideas about the Holocaust question. Who benefits from such suppression of intellectual freedom? The ADL? Hillel? Who benefits from a “Managed” press? ADL? Hillel?