Protecting German Consumers from too Much Tolerance 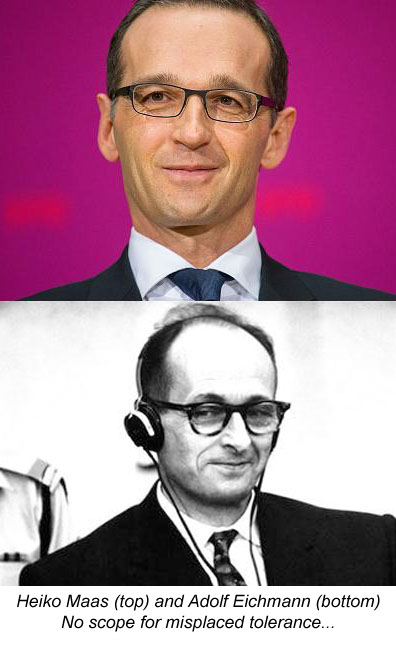 German Federal Minister of Justice and Consumer Protection Heiko Maas has announced that Facebook must obey German law even if free speech is curtailed:

"Holocaust denial and inciting racial hatred are crimes in Germany, and it doesn't matter if they're posted on Facebook or uttered out in the public on the market square... Germany has zero tolerance for such expression."

In a crafty move, Maas charged Facebook with ignoring complaints from users that "their protests on racist posts have been ignored." Not only is Maas forcing Facebook to censor its own website but he wants Facebook to respond quickly to the complaints of self-appointed censors.

"The internet isn't a place where laws are ignored, where indictable comments can be spread with impunity," Maas said, adding:

"There's no scope for misplaced tolerance towards internet users who spread racist propaganda. That's especially the case in light of our German history."

Mr. Maas has been protecting German consumers from too much tolerance since 17 December 2013 when he became minister. He is a leader in the Sozialdemokratische Partei Deutschlands.

In response, Facebook has formed a partnership with Voluntary Self-Monitoring of Multimedia Service Providers, a German watchdog group that monitors online hate speech. The social network also plans to create a task force to examine the issue of hate speech, inviting community groups, companies and politicians to share their expertise on the topic. The company also plans to launch a broad campaign to promote a counter campaign that will debate and challenge the views of xenophobia.

CODOH will try and participate in the Task Force, present information about Revisionism, and defend Free Speech. The people at CODOH feel that there is nothing anti-Semitic or racist about questioning history. We also think that everyone should be concerned about Heiko Maas's attempts at controlling ideas people post on their Facebook pages.