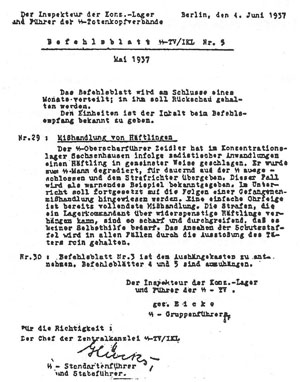 In this June 4, 1937, internal circular notice, Theodor Eicke, SS General and "Inspector of the Concentration Camps," announces that the SS does not tolerate mistreatment of concentration camp inmates.

In a section headed "Mistreatment of Prisoners," Eicke announces that an SS Sergeant named Zeidler was being punished because, "in a sadistic mood," he had struck a prisoner at the Sachsenhausen concentration camp "in a nasty way." After demotion to the lowest SS rank, Zeidler was permanently dismissed from the SS, and then turned over to a criminal judge.

"This case will be made known as a warning example," Eicke continues. "During instruction classes, attention should repeatedly be given to the consequences of mistreating prisoners. Even a simple boxing of the ears is already real mistreatment... In every case, the reputation of the SS is to be kept clean by dismissing the culprit."

Eicke further orders that the various SS units are to be informed of the contents of this circular.