Searching for Purpose in the "Post-Modern" World

Vaclav Havel is president of the Czech Republic. This is excerpted from an address he gave on the occasion of receiving the Liberty Medal at Independence Hall in Philadelphia on the Fourth of July, 1994.

There are thinkers who claim that if the modern age began with the discovery of America, it also ended in America. This is said to have occurred in the year 1969, when America sent the first men to the moon. From this historical moment, they say, a new age in the life of humanity can be dated.

I think there are good reasons for suggesting that the modern age has ended. Today, many things indicate that we are going through a transitional period, when it seems that something is on the way out and something else is painfully being born. It is as if something were crumbling, decaying, and exhausting itself, while something else, still indistinct, were arising from the rubble.

Periods of history when values undergo a fundamental shift are certainly not unprecedented ... The distinguishing features of such transitional periods are a mixing and blending of cultures and a plurality or parallelism of intellectual and spiritual worlds. These are periods when all consistent value systems collapse, when cultures distant in time and space are discovered or rediscovered. They are periods when there is a tendency to quote, to imitate and to amplify, rather than to state with authority or integrate. New meaning is gradually born from the encounter, or the intersection, of many different elements. 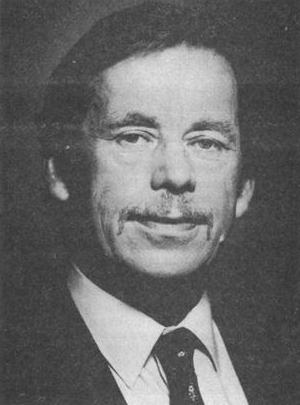 Today, this state of mind ... is called post-modernism. For me, a symbol of that state is a Bedouin mounted on a camel and clad in traditional robes under which he is wearing jeans, with a transistor radio in his hands and an ad for Coca-Cola on the camel's back. I am not ridiculing this, nor am I shedding an intellectual tear over the commercial expansion of the West that destroys alien cultures.

I see it rather as a typical expression of the multicultural era, a signal that an amalgamation of cultures is taking place. I see it as proof that something is happening, something is being born, that we are in a phase when one age is succeeding another, when everything is possible ...

This is related to the crisis, or to the transformation, of science as the basis of the modern conception of the world. The dizzying development of this science, with its unconditional faith in objective reality and its complete dependency on general and rationally knowable laws, led to the birth of modern technological civilization. It is the first civilization in the history of the human race that spans the entire globe and firmly binds together all human societies, submitting them to a common global destiny.

Itwas this science that enabled man, for the first time, to see Earth from space with his own eyes, that is, to see it as another star in the sky.

At the same time, however, the relationship to the world that modern science fostered and shaped now appears to have exhausted its potential. It is increasingly clear that, strangely, the relationship is missing something. It fails to connect with the most intrinsic nature or reality, and with natural human experience. It is now more of a source of disintegration and doubt than a source of integration and meaning. It produces what amounts to a state of schizophrenia: man as an observer is becoming completely alienated from himself as a being.

Classical modern science described only the surface of things, a single dimension of reality. And the more dogmatically science treated it as the only dimension, as the very essence of reality, the more misleading it became. Today, for instance, we may know immeasurably more about the universe than our ancestors did, and yet, it increasingly seems they knew something more essential about it than we do, something that escapes us. The same thing is true of nature and of ourselves. The more thoroughly all our organs and their functions, their internal structure, and the biochemical reactions that take place within them are described, the more we seem to fail to grasp the spirit, purpose, and meaning of the system that they create together and that we experience as our unique "self."

And thus today we find ourselves in a paradoxical situation. We enjoy all the achievements of modern civilization that have made our physical existence on this Earth easier in so many important ways. Yet we do not know exactly what to do with ourselves, where to turn. The world of our experiences seems chaotic, disconnected, confusing. There appear to be no integrating forces, no unified meaning, no true inner understanding of phenomena in our experience of the world. Experts can explain anything in the objective world to us, yet we understand our own lives less and less. In short, we live in the post-modern world, where everything is possible and almost nothing is certain ...

The abyss between the rational and the spiritual, the external and the internal, the objective and the subjective, the technical and the moral, the universal and the unique constantly grows deeper.

These questions have been highlighted with particular urgency by the two most important political events in the second half of the 20th century: the collapse of colonial hegemony and the fall of Communism. The artificial world order of the past decades had collapsed and a new, more just, order has not yet emerged. The central political task of the final years of this century, then, is the creation of a new model of coexistence among the various cultures, peoples, races, and religious spheres within a single interconnected civilization. This task is all the more urgent because other threats to contemporary humanity brought about by one-dimensional development of civilization are growing more serious all the time.

Many believe this task can be accomplished through technical means ... But such efforts are doomed to failure if they do not grow out of something deeper, out of generally held values.

This, too, is well-known. And in searching for the most natural source for the creation of a new world order, we usually look to an area that is the traditional foundation of modern justice and a great achievement of the modern age: to a set of values that – among other things – were first declared in (Independence Hall). I am referring to respect for the unique human being and his or her liberties and inalienable rights, and the principle that all power derives from the people. I am, in short, referring to the fundamental ideas of modern democracy.

The idea of human rights and freedoms must be an integral part of any meaningful world order. Yet I think it must be anchored in a different place, and in a different way, than has been the case so far. If it is to be more than just a slogan mocked by halfthe world, it cannot be expressed in the language of a departing era, and it must not be mere froth floating on the subsiding waters of faith in a purely scientific relationship to the world ...

A modern philosopher once said: "Only a God can save us now." Yes, the only real hope of people today is probably a renewal of our certainty that we are rooted in the Earth and, at the same time, the cosmos. This awareness endows us with the capacity for self-transcendence. Politicians at international forums may reiterate a thousand times that the basis of the new world order must be universal respect for human rights, but it will mean nothing as long as this imperative does not derive from the respect of the miracle of being, the miracle of the universe, the miracle of nature, the miracle of our own existence. Only someone who submits in the authority of the universal order and of creation, who values the right to be a part of it and a participant in it, can genuinely value himself and his neighbors, and thus honor their rights as well.

It logically follows that, in today's multicultural world, the truly reliable path to coexistence, to peaceful coexistence and creative cooperation, must start from what is at the root of all cultures and what lies infinitely deeper in human hearts and minds than political opinion, convictions, antipathies, or sympathies: It must be rooted in self-transcendence. Transcendence as the only real alternative to extinction.

The Declaration of Independence, adopted 218 years ago in this building, states that the Creator gave man the right to liberty. It seems man can realize that liberty only ifhe does not forget the one who endowed him with it.