Those who promote what Jewish-American scholar Michael Goldberg calls “the Holocaust cult” (in his book Why Should Jews Survive?) have for decades sought to make the story more “relevant” and “meaningful” for non-Jewish Americans by appealing to patriotic sentiments. This has meant, for example, emphasizing the role of American troops as liberators of German concentration camps during the final weeks of the Second World War.

Adding to this, Holocaust campaigners have sought to appeal to the racial sensitivities of African-Americans by promoting the story that two all-black US army units – the 761st Tank Battalion and the 183rd Combat Engineers Battalion – liberated the infamous Buchenwald and Dachau concentration camps in April 1945. In its issue of May 31, 1988, The New York Times reported, for the first time, that black GIs had liberated Dachau and Buchenwald. The paper cited African-American leader Jesse Jackson as the source.

This story was given much greater prominence in late 1992 with the release of Liberators: Fighting on Two Fronts in World War II, issued as a much-touted “documentary” film and as a lavishly-illustrated book. In the film, two black veterans of the 761st “recalled” their role in liberating Dachau, ramming their tanks against the camp gates and encountering enemy machine gun fire from a burning barn. Also in the film, two elderly Jews who had been inmates in Buchenwald “recounted” their liberation by black GIs. 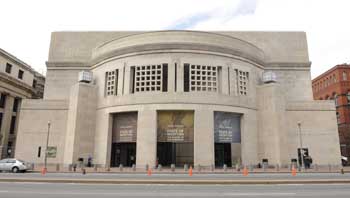 The “highlight” of the film, reported the Newsletter of the US Holocaust Memorial Council, is a “deeply moving reunion” at Buchenwald of former inmate Benjamin Bender “with two of his liberators,” E. G. McConnell and Leonard Smith. Actually, this “moving reunion” is a staged fraud. “It’s a lie,” confirmed McConnell in 1993. “We were nowhere near these camps when they were liberated … I first went to Buchenwald in 1991 with PBS [television], not the 761st.” No black troops participated in the liberation of either Buchenwald or Dachau.

All this has been known since 1993. The “black liberators” fable was dissected, for example, in a four-page report, “Multi-Media ‘Liberators’ Project Exposed as Fraud,” published in the May-June 1993 Journal. But in spite of the 1993 revelations, the US Holocaust Museum – a federal government center operated by the taxpayer-funded United States Holocaust Memorial Council – has continued to propagate this fraud.

“The Holocaust Museum in Washington, DC, is perpetrating a falsehood; and, worst of all, it knows it,” wrote Mark Schulte recently in The Weekly Standard (August 10-17, 1998, p. 20), an influential “neo-conservative” magazine. On the second floor of the Museum’s permanent exhibition, visitors can view a ten-minute movie. “Spliced into footage of Dachau’s liberation on April 29, 1945,” The Weekly Standard report goes on, “are several photographs of Buchenwald [showing black GIs] taken five days after the camp’s liberation, when a small contingent from the 183rd Combat Engineers delivered water purification equipment.”

Similarly, two books published with the cooperation and approval of the US Holocaust Museum also perpetrate the “black liberators” story. In a lavishly illustrated 1993 guide book, The World Must Know: The History of the Holocaust as Told in the United States Holocaust Memorial Museum, author (and Museum official) Michael Berenbaum includes a large photograph (page 188) showing black GIs, identified as “American liberators,” in the Buchenwald camp on “April 11, 1945.” In fact, this photograph was taken five days after the camp’s liberation. This same photo, with a similarly deceitful caption, is also published in Liberation 1945, another work produced in cooperation with the Holocaust Museum.

At the time of the Museum’s opening in 1993, Jewish writer Melvin Jules Bukiet aptly noted: “It’s not Jewish tragedy that’s remembered on the Mall this week; it’s Jewish power to which homage is paid.” (The Washington Post, April 18, 1993, p. C3). Given the Museum’s origins, and the character of those who run it, deceitful history – of which the “black liberators” story is only one example – is fully to be expected.