Since 1990, Bernard Notin, assistant professor of economics at the University of Lyon III, has been unable to practice his profession – in spite of French law – because of a decision by the Jewish institutions and organizations of Lyon represented by Dr. Marc Aron,[1] as well as the Union of Jewish Students of France (Union des Etudiants Juifs de France: UEJF). 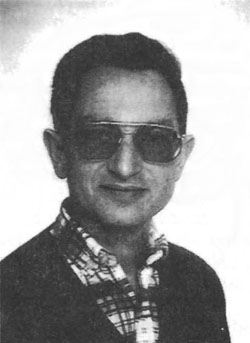 No one protests this anomaly: neither Bernard Notin’s colleagues, the president of his university, the national Minister of Education, the human rights organization Ligue des droits de l’homme, nor the major media. They remain silent, either because they approve this excessive display of power, or because they know these organizations are capable of unleashing at will a ruinous witch-hunt against heretics.

On June 7, 1994, the national daily newspaper Le Monde felt it necessary to announce that Notin was being hired to teach at the Mohammed I University in Oujda, Morocco, at the request of the Dean of the Faculty of Economics. The UEJF responded by bringing such pressure to bear internationally that within 48 hours the Moroccan university made it known it was not planning to hire Notin.

From the outset, Le Monde has been implacable toward Notin. Notably, it served as a mouthpiece for his persecutors with a January 28-29, 1990, item by Edwy Plenel entitled “Un article jugé raciste et révisionniste suscite des protestations” (“An article judged racist and revisionist incites protests”).

Notin’s thought crime was to have authored an iconoclastic study on the role of the French media. It appeared in a specialized journal with a restricted circulation that is published with the approval of the prestigious Centre national de la recherche scientifique (CNRS), the National Center for Scientific Research. (Economies et sociétés, No. 8/ 1989 [Dec. 1989], University Press of Grenoble, pp. 117-133).

In passing, the author brought up the media’s treatment of the subject of homicidal gas chambers, letting it be known that he is skeptical of the existence of these chemical slaughterhouses, and citing as his reference the 1980 revisionist book by Serge Thion, Vérité historique ou vérité politique? (“Historical truth or political truth?”).[2]

Thus began the campaign against this 39-year-old scholar (and sole breadwinner for a family with five small children) – a campaign that eventually would surpass in vehemence and duration anything seen thus far along these lines. Because this story has already been covered in the French journal Revue d’histoire révisionniste, I shall not deal further with it here.[3]

On the administrative level, the National Council for Higher Education and Research (Conseil national de l’enseignement supérieur et de la recherche: CNESER) also decided to impose penalties, although this matter is currently pending before the Council of State.

Bernard Notin tried to resume his work as a assistant professor, but Jewish organizations acted to prevent it. Each year, without fail, he writes to the president of his university formally to request a teaching assignment, along with a timetable. He receives no answer to his letters.

On February 3, 1993, he was persuaded to sign a news release that amounted to a solemn public recantation. In the text, after protesting against what had been done to him (“One intends anew, illegally, and through coercion, to forbid me to teach and to exercise the profession for which the taxpayers are paying me”), he declared that he was not questioning the genocide of the Jews nor the Nazi gas chambers. He added that his purpose had never been to “rewrite history improperly,” and concluded notably: “If I have caused, involuntarily, the least suffering to anyone, I ask their forgiveness.”

All for nothing: the ban continues to this day.

Bernard Notin’s final lecture was on May 2, 1990. For more than six years, the predicament of this scholar, who is now 45 years old, has constituted an anomaly in both law and reason.

The Jewish organizations know quite well that no law authorizes them to impose such penalties on anyone. In showing their readiness to pressure an employer – even a government institution – to prevent an employee from practicing his profession, these organizations pose a threat to the livelihood of everyone who is not self-employed or independently wealthy. As for the nation’s education administrators, they know that every civil servant has the right, in the exercise of his duties, to government protection.

Jewish institutions and organizations, mouthpieces for the Jewish community, enjoy special privileges in France. The Notin affair demonstrates that they are in a position to dictate their own laws to the state. I do not know of any other institution, any other organization, or any other community in France capable of conducting a campaign of this kind, of persecuting a man with this ferocity, of pursuing him even in exile, and all this, if not with general approval, at least without a word of protest.[4]

In France people say that “the Jews are like everyone else.” In view of the Notin affair, I personally have difficulty believing it.