The Terror Did not Begin with Stalin

"There is hardly any myth that is more important and which has more consequences than the one about ‘Jewish Bolshevism.’"—Prof. Dr. Ernst Nolte, Preface

In a major work published a few years ago, Alexander Solshenizyn analyzed in great detail the problems that characterized two centuries of Jewish life in Russia from the moment Russia took over a considerable part of eastern Poland at the end of the 18th century to the downfall of the Soviet Union. He expounds the reasons that caused many Russian Jews to emigrate to the West – not least to Germany – and that led others to an espousal of the idea that only a violent overthrow of the existing social structure could free them once and for all from persecution and oppression, even if it meant that, in the process, they themselves would give up their religious identity. 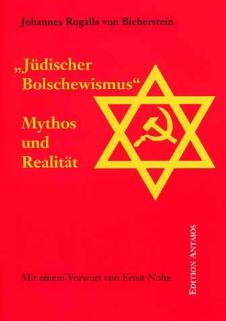 Those of us who cannot take the time to go through the thousand or so pages of Solshenizyn’s two-volume book now have the possibility of reading a similar analysis in German: Johannes Rogalla von Bieberstein’s book, Jewish Bolshevism. Myth and Reality.

The author recalls, for the benefit of the younger generations, what an enormous and immediate threat Bolshevism had been from its very beginning for the rest of the western world and what horrifying deeds punctuated the consolidation of its power in the 1920s and 1930s. The threat was all the more real in that the Soviet government and its international arm, the Komintern, were able to operate in other countries through countless local followers who had either embraced Bolshevik ideas voluntarily or who had been delegated by Moscow to the countries where they lived. In his book, "Les enfants de papier", Didier Epelbaum states that the hundreds of thousands of Jews who came to France from eastern Europe in the early part of the last century were "either Zionists or communists," and it is not surprising that the European peoples came to identify the ideas that came from Moscow with the activists who spread them.

The question of whether or not Hitler can be imagined without Bolshevism, which was a hot issue among German historians a decade or two ago, is irrelevant when it comes to the reasons that caused greater parts of the populations of western Europe to fight the spread of communism by any means available. These peoples were much closer to what was happening in the young Soviet Union, they had so much more direct information about that country, and they were much more exposed to a direct military threat than, for example, the U.S. or even Britain. When the threat became a reality during the Spanish Civil War, it was a confirmation for many that their fears were justified.

Rogalla von Bieberstein analyzes the considerable presence of Russian Jews in the Bolshevik movement from its beginning until Stalin’s purges in the late 1930s. Their activity in the party and its organizations was far greater than one would expect on the basis of mere numbers. Whereas some 2 or 3 million persons in the vast Russian empire claimed to belong to the Jewish people, more than 30 of the top 100 officials of the secret police in the early 1930s (OGPU, GPU, NKVD…) were Jewish, as stated by other authors.

This unusually high proportion of Jews in the ranks of the Bolsheviks was no doubt due to the often traumatic experiences many of them had suffered in the earlier decades, e.g., the pogroms at Kishinev or Odessa, or to the restrictions that had been imposed on them with respect to residence or professional activity. In shedding both their own Jewish identity and destroying the structure of Russian society, many of them were hoping to bring about a better world for everyone. These immediate aims were their justification for the introduction of what Salcia Landmann once called "the silliest" economic system, and for the annihilation of anything and anybody standing in its way.

When Hitler set up concentration camps for his opponents, he met with violent hatred from all sides, although it can be argued that by the beginning of the Second World War his victims numbered one for every thousand that had been killed in the Soviet Union. Apparently, the world had by then come to terms with the regime of terror in the USSR. The reader may in turn conclude that moral judgment of such events is based on the kind of victim or the method of killing, rather than on mere numbers.

The present generation may be quite surprised to read the earlier writings of apostles of the Bolshevik world order, like Lukácz or Bloch, who wanted to achieve their aims "only by force" (Lukácz), or who called the Germany of 1918 "nothing but a sinister machine of death with the Devil in its center" (Bloch), but who still became very much respected academics in later life. Even Lev Kopelev, after he had left the Soviet Union for asylum in Germany in the 1980s, declared that his former aim, world communism, had required that "…for its sake, one had to be ready, nay, one was obliged to lie, to steal, to kill hundreds of thousands, even millions of people … the notions of Good and Evil, human kindness or the lack of it were for us mere abstractions, devoid of any meaning."

The political issues of the 1920s and the 1930s have almost passed into oblivion, together with the civil and real wars instigated by the Soviet side and with the people who were involved in these turmoils; these aspects, however, are fundamentally indispensable if we want to understand what followed. Rogalla von Bieberstein’s book ought to help the Germans to come to grips with their past. If it is ever translated into other languages, perhaps it will shine some light into that period of history which Piers Brendon has so rightly called "the Dark Valley."