Article 1 - The Legislative Branch Section 8 - Powers of Congress
To declare War, grant Letters of Marque and Reprisal, and make Rules concerning Captures on Land and Water.[1]

Revisionists are typically quick to condemn President Franklin Roosevelt for his actions, which cast the United States into the Second World War. While the media and public opinion voice virtually no doubt that World War Two was a moral war (for the Allies) and one that needed to be fought, revisionists have frequently analyzed Roosevelt's actions that broke his 1940 campaign promise to keep Americans out of any foreign war.[2] One of the foremost figures of World War Two historical revisionism, Harry Elmer Barnes, wrote,

"[Roosevelt] went as far as he dared in illegal efforts, such as convoying vessels carrying munitions, to provoke Germany and Italy to make war on the United States. Failing in this, he turned to a successful attempt to enter the War through the back door of Japan. He rejected repeated and sincere Japanese proposals that even [Cordell] Hull admitted protected all the vital interests of the United States in the Far East, by his economic strangulation in the summer of 1941 forced the Japanese into an attack on Pearl Harbor, took steps to prevent the Pearl Harbor commanders, General Short and Admiral Kimmel, from having their own decoding facilities to detect a Japanese attack, kept Short and Kimmel from receiving the decoded Japanese intercepts that Washington picked up and indicated that war might come at any moment, and ordered General Marshall and Admiral Stark not to send any warning to Short and Kimmel before noon on December 7th, when Roosevelt knew that any warning sent would be too late to avert the Japanese attack at 1:00 P.M., Washington time"[3]

Despite Roosevelt's maneuvering that resulted in war with Japan and five European nations including Germany, Roosevelt was the last U.S. President who didn't skirt the US Constitution and actually went to war only following a formal declaration by Congress. 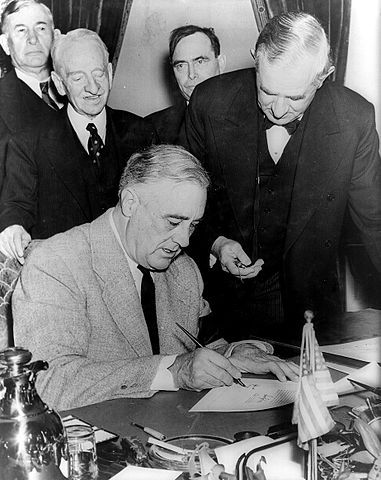 President Franklin D. Roosevelt signing the declaration of war against Germany, marking US entry into World War Two in Europe. Senator Tom Connally stands by holding a watch to fix the exact time of the declaration. 11 December 1941. By Farm Security Administration/Office of War Information [Public domain], via Wikimedia Commons

The events surrounding the declaration of war on Japan are fairly well known. On December 8, 1941, the day after the Japanese attacked Pearl Harbor, Roosevelt delivered his famous "Day of Infamy" speech. The address concluded with his request that Congress formally declare war,

"I ask that the Congress declare that since the unprovoked and dastardly attack by Japan on Sunday, December 7, 1941, a state of war has existed between the United States and the Japanese Empire."

Immediately afterward, the Senate unanimously approved the resolution 82-0, while the House of Representatives vote was 388 to 1. The one dissenting vote was from Montana Republican Jeannette Rankin.[4]

Three days later, following Hitler's declaration of war on the United States, Roosevelt again went to Congress, to request a recognized state of war with both Germany and Italy.[5] This time the vote was unanimous (Rankin would vote "present" rather than for or against the declaration).[6]

Roosevelt would request Congress to declare war once again on June 5, 1942. Three declarations of war were issued that day, against Bulgaria, Hungary, and Romania. The declaration of war followed a request from Roosevelt issued on June 2, 1942. In his message he wrote simply:

The declaration of war against Bulgaria, Hungary and Romania stands today as the last such declaration by the United States.

In all, the United States has only made 11 separate formal declarations of war against foreign nations encompassing 5 wars. [8]

Since 1942, of course the United States has not led the world in a seventy-years' peace. Despite Roosevelt's relative ease in obtaining six formal declarations of war, since World War Two Americans have been drawn time and time again into war without a congressional declaration. Gore Vidal commented:

"Since V-J Day 1945 ('Victory over Japan' and the end of World War II), we have been engaged in what the historian Charles A. Beard called 'perpetual war for perpetual peace.' I have occasionally referred to our 'enemy of the month club': each month we are confronted by a new horrendous enemy at whom we must strike before he destroys us."[10]

Vidal goes on to list several hundred wars and operations conducted against Communism, terrorism, drugs, or as he puts it, "sometimes nothing much" that occurred between Pearl Harbor and September 11, 2001. [11] Based on casualties alone the costliest conflicts following the last official declaration of war include the Korean War with 33,686, the Vietnam War with 47,424, Iraq War with 3,542 and Afghanistan at greater than 2,000.[12]

While generally remembered as one of the United States's costliest wars, the Korean War was referred to only as a "Police Action" by then-President Harry Truman. Truman announced on June 27, 1950 that he ordered U.S. air and naval forces to South Korea to aid their army in repulsing an invasion by Communist North Korea. Truman justified his actions by explaining that he was enforcing a United Nations resolution calling for an end to hostilities, and to stem the spread of Communism in Asia. [13]

Truman's actions set a precedent that would be followed by Democrats and Republicans to the present day. With the path now cleared of any potential congressional opposition, U.S. presidents would be empowered to conduct the wars of their choosing. The Vietnam War with over 47,424 dead also was fought without a declaration of war. President Lyndon Johnson would issue a report claiming two attacks against U.S. ships in the Gulf of Tonkin. The so-called "Gulf of Tonkin Resolution" passed in August 1964 gave President Johnson free rein to escalate the war. [14]

In March 2003, forces from the United States, the United Kingdom, Australia and Poland invaded Iraq. According to U.S. President George W. Bush and British Prime Minister Tony Blair, the coalition mission was "to disarm Iraq of weapons of mass destruction, to end Saddam Hussein's support for terrorism, and to free the Iraqi people."[15] Like the "events" of the Gulf of Tonkin, the "Weapons of Mass Destruction" proved to be nonexistent.[16] Whether Bush was simply mistaken or whether he fabricated fantastic weapons to garner support for his war, it is clear that such power should not be in the hands of the President alone.

The U.S. Constitution was purposely designed to prevent such power to reside with the president. James Wilson, a Constitutional Convention delegate, explained to the Pennsylvania ratifying convention in 1787,

"This system will not hurry us into war; it is calculated to guard against it. It will not be in the power of a single man, or a single body of men, to involve us in such distress; for the important power in declaring war is invested in the legislature at large." [17]

How then did such absolute power shift to the executive branch? Ron Paul attempts to answer:

"Congress has either ignored its responsibility entirely over these years, or transferred the war power to the executive branch by a near majority vote of its members, without consideration of it by the states as an amendment required by the Constitution."[18]

Today, Americans continue to fight and die all around the world. The aggression of the United States would be universally condemned if launched by any other nation.

In the 1940 presidential election campaign, Roosevelt promised to keep America out of the war. He stated, "I have said this before, but I shall say it again and again and again; your boys are not going to be sent into any foreign wars."[19] His position was popular and led to his unprecedented third term as president. In a recent poll 60% of Americans said the war in Afghanistan is not worth fighting.[20] Despite a 70-year media war against "isolationism" the American people still favor peace and keeping out of foreign conflicts despite the perpetual series of wars launched by our presidents. The time has come for revisionists to consider the actions of all those who have followed Roosevelt. For all his lies and maneuvering, Roosevelt looks like a great statesman compared to those who have followed right down to and including the current commander-in-chief.