A Dangerous New Axis Emerges in the United States and Russia

Edgar M. Bronfman, president of the World Jewish Congress, is circulating a fund-raising letter tying together CODOH's Campus Project and—I'm not joking here—the "rise of Vladimir Zhirinovsky" in Russia. The Jewish community is being frightened with the prospect of a new axis of power as Vladimir and Smith forge an international alliance to weigh evidence for and against the "gas chambers." 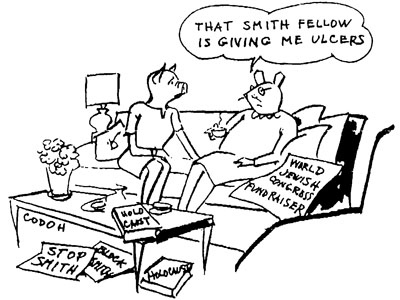 To make certain his potential contributors know whom he's speaking of, Bronfman includes, along with his five-page solicitation for contributions, a copy of CODOH's Museum ad. This is the ad that challenges the U.S. Holocaust Memorial Museum in Washington D.C. to exhibit proof that Germans gassed one person in any camp in Europe as part of a program of genocide. This is the ad that has run in more than 30 newspapers at important universities across the country.

"Dear Friend .... You may have seen it discussed on '60 Minutes' or seen paid advertisements in newspapers across the country—Revisionism—a mild term for a frightening campaign to rewrite history ...

"Today, in the United States, the revisionist campaign is placing ads in college newspapers around the country, sending speakers to college campuses to distort the facts and deny that the Holocaust ever took place [Not quite, Edgar...] ....

"That's why I am writing to ask you to make a special contribution to World Jewish Congress today—to help stop revisionism now, before it is too late.

"We must use every resource available to stop [revisionism]—and not just in the United Slates. You see, in countries around the world the situation is even worse.

"In Europe ... the most visible example of growing anti-Semitism... [that is, "revisionism" in Bronfman's feverish imagination] ... and resulting threat to the history of the Holocaust is Vladimir Zhirinovsky."

What does the rise of Zhirinovsky signal?

"... revisionists are one step closer to erasing the memory of the Holocaust forever."

I had no idea we had Zhirinovsky in our pocket! The long aim of the Campus Project has reached across the seas into the intellectual slums of Moscow. No wonder the Edgar Bronfmans are chewing their fingernails.

"Revisionism will not be eradicated easily .... You and I must take action to stop revisionism today....

"PS: Revisionists are funding a well-organized campaign to say that the Holocaust never happened [Edgar, that's just not quite it.]. WJC needs your help now to stop this outrageous movement in our country and around the world. Please send a generous contribution today."

That is, send money quick because—the revisionists are coming and they've got the Russians with them! Dust off Star Wars! Just as the crucifix will protect you from Satan, the six-pointed star of the Hebrews may be the only defense possible from the Smith/Zhirinovsky conspiracy to weigh evidence for and against the gas chamber theory.

Columnist Joe Sobran writes that the ADL, one of several mainline Jewish organizations that has me on its hit list, has a yearly budget of $38 million. I find from another source that the budget of the WJC is considerably larger, that it is, in fact, the most heavily funded private Jewish organization on the planet. Exciting odds, eh? While there are no millionaires who read SR (so far as I know), and I don't expect miracles, I do appreciate you doing what you can.