Few North American writers have come under more sustained attack for outspoken and often unorthodox views than Doug Collins, an acclaimed British-born Canadian author and journalist who writes a popular column for the North Shore News of North Vancouver, British Columbia. Every journalist understands that criticism comes with the job. But the relentless campaign to silence Collins includes legal measures with ominous significance for all defenders of free speech and unfettered historical inquiry.

In July 1994 the Canadian Jewish Congress (CJC) brought a formal complaint against Collins, charging him with violating British Columbia's amended "Human Rights Act." According to the broadly-worded 1993 amendment to the Act, "no person shall publish ... any notice, sign, symbol ... that indicates discrimination against a person or a group or class of person ... or is likely to expose a person or a group to hatred or contempt." As Collins notes, this law "covers the waterfront, the key words being 'indicate' and 'is likely'." There is no limit to the fine that can be imposed on violators.

One local City Council member publicly expressed the hope that the newly amended Act would "put a stop to the kind of writing Doug Collins does." Considering that the new law was promptly dubbed the "Kill Collins Act," it's not surprising that he was the first person charged under it. "I had the honor," Collins wryly observed, "of being the first columnist in Canadian history to be hauled before a Human Rights Council on a charge of political incorrectness."

Accusing Collins of anti-Jewish "Holocaust denial," the CJC specifically complained about a March 1994 column he had written about the much-hyped movie "Schindler's List," which he called "Swindler's List." (This column was reprinted in the May-June 1994 Journal.) Says Collins: "You gotta love their movie and the people who made it, you see. Otherwise it's off to the dungeons."

Laying down operative guidelines for the "politically correct," Canadian Jewish Congress official Bernie Farber declared: "Holocaust denial is anti-Semitic hate speech subject to the laws of Canada and the human rights provisions of the BC Human Rights Code. Hate speech is not free speech and should never be tolerated in a free and democratic society." (Financial Post, Dec. 17, 1994)

The Collins affair has been receiving some country-wide attention, much of it critical of the CJC action and the provincial law. Canada's most influential daily, the Toronto Globe & Mail, commented in an editorial: "We are witnessing a bid to criminalize certain types of speech, but without actually using the criminal law to do it."

One of Canada's most influential journalists, Peter Worthington, told readers of his widely-read Toronto Sun column (Feb. 9, 1995) that the CJC action against Collins is "wrong, foolish and an affront to free speech." He continued:

I suspect what bugs Collins is what also bugs me – how we seem so concerned about what happened to Jews in World War II, but seem too casual (if not callous) about other holocausts, which surface in the media briefly, then fade from memory ... Having been victims of racism and hate, I think influential and respected organizations like the CJC should be especially wary about calling names and ascribing motives to others that may be wrong.

The Publisher, the voice of the Canadian Community Newspapers Association, warned in an editorial (Dec. 1994) that "everyone involved with newspapers – producers and readers alike – should be concerned with" the Collins/CJC case. While Collins "expresses strong views, and is far from politically correct," the editorial continued, he "does not write hate literature." British Columbia's amended Human Rights Act "opens any Canadian to persecution by anyone who disagrees with the opinions expressed." 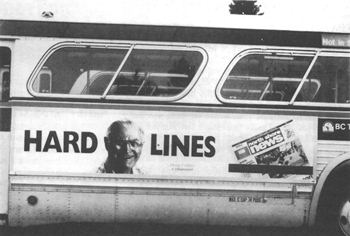 Not one to meekly submit to pressure, Collins is defiantly fighting back. The Canadian Jewish Congress "and its allied organizations," he charges, are "our biggest threat to free speech ... The CJC complaint is a direct attack on freedom of the press."

Collins looks forward to a full-scale legal and media clash, anticipating that the CJC challenge and the "Human Rights Act" cannot survive the public scrutiny and ridicule that will inevitably accompany a well-publicized legal battle. As we go to press, this matter has still not been brought to court.

In view of his record, especially during World War II, the effort by Jewish groups to portray Collins as some kind of "neo-Nazi" is simply absurd. After joining the British army as a volunteer at the age of 19, he served as an infantry sergeant in 1940 in France, where he was captured. He was later awarded the Military Medal "for bravery in the field" fighting Germans at Dunkirk.

Escaping from prisoner of war camp Stalag VIIIB in Silesia, he stealthily made his way to Hungary. After being captured there, he made another daring escape, this time making his way to Romania. He was imprisoned once again, but when Romania capitulated in 1944, he was freed and returned to Britain. After re-joining the military, he served in the final months' military campaign in northwest Europe. Following demobilization in 1946, he joined the British Control Commission in occupied Germany. He moved to Canada in 1952.

Collins' journalistic record is equally impressive. Recipient of two of Canada's most coveted awards for journalism, his career has included work, both as a reporter and commentator, for several major Canadian daily papers, and on television and radio. He is also the author of several books. His presentation at the Tenth IHR Conference, "Reflections on the Second World War, Free Speech and Revisionism," was published in the Fall 1991 Journal. (It is also available on audio and video tape from the IHR. See also "Doug Collins Under New Fire," in the Nov.-Dec. 1994 Journal, pp. 43-46).

It's difficult to be neutral about Collins. While some detest him, many admire him as an eloquent voice for Canada's "silent majority." His twice-weekly column is a very popular feature of the North Shore News. In vigorous, straight-forward prose, he lays out well-informed but common-sense views on the country's most heated issues, including immigration, the status of Quebec, and special privilege "rights."

During a brief appearance in a recent CBS television "60 Minutes" report, he expressed opposition to Canada's open door policy, which has brought a large influx of Chinese to Vancouver, dramatically transforming British Columbia's cultural and racial character.

Last year Collins survived a serious threat to his career. Lionel Kenner, a former philosophy professor and Jewish community activist, was so upset by several of Collins' 1993 and 1994 columns that he filed a formal complaint with the British Columbia Press Council, a quasi-judicial tribunal that oversees the media. (These columns were reprinted in the Journal, Nov.-Dec. 1993 and May-June 1994.)

On the basis of this complaint, Collins and Kenner were called to a formal hearing of the Press Council on July 24. Kenner told the panel that "it is a long-standing practice of Mr. Collins to mislead his readers," and charged that the North Shore News editor and publisher "have either knowingly colluded with Collins in the publishing of deliberate lies or alternatively they have carelessly published deliberate lies."

In a meeting room packed with dozens of ardent supporters, Collins defended his writings and the principle of free speech. He displayed ten books he had consulted in writing his columns on the Holocaust issue, including Dr. Butz' Hoax of the Twentieth Century, and he spoke about his own visit to Auschwitz.

Collins explained that, while he does not deny the Holocaust, he does "question the six millions story" and has "doubts about the alleged gas chambers." He also stressed, "I'm not in any way sympathetic to the Nazi regime."

Kenner's complaint, said Collins, "is totally in line with the views and wishes of the Canadian Jewish Congress, a pressure group that is prominent in the propagandizing of what is known as the Holocaust." Several times the room broke into loud applause for Collins, who concluded his remarks by quoting George Orwell: "Freedom of speech is my right to say what you don't want to hear."

In its ruling, issued in late October, the Press Council reproached Collins. It found that he had "misled" readers by inadequately quoting sources in one of his columns, thus breaching the Council's code of practice. At the same time, though, the Council did not conclude that Collins had lied, nor did it instruct Collins or the newspaper to issue a correction or apology. It went to state: "The code's accuracy provisions must not be narrowly applied here because Mr. Collins was engaging in the expression of opinion, not writing a news story, and enjoyed the widest possible latitude ... Unpopular or controversial voices must be challenged but never silenced."

Specifically, the Press Council declared that it does "not condemn Mr. Collins or the News for exercising their constitutional right of free expression." In some news reports published about the decision, this salient point was not mentioned.

While he has survived this latest threat, Collins' enemies remain implacable and determined. The struggle continues.