Andrew Gray, a writer and translator, is former office director in the US Department of Commerce. He lives in Washington, DC~

"In the years since Hiroshima," Thomas Powers writes in a luminous introduction to a superb book, "the makers of the American bomb have all made peace with their creation. They have been asked a hundred times if they feel guilt. They say no and they mean no. Hitler might have done it first ... But with the Germans they have not made peace, only kept a polite silence. Just what went wrong with the German bomb program they are not sure, but on one point they are dead certain – no moral compunction on Heisenberg's part, however tenuous, played a role." (emphasis in the original).

The evidence suggests otherwise – and massively. Much of this indictment of American hypocrisy, of a double standard, of wartime propaganda continuing in peacetime guise, is based upon the work of David Irving, whose interviews in 1965 and 1966 with Werner Heisenberg, head of wartime Germany's atomic bomb development program, provided the foundation for his 1967 work, The German Atomic Bomb (Simon & Schuster). Irving's interviews, Powers emphasizes (unsurprisingly for revisionists), elicited a greater candor from Heisenberg than those of any other historian. Beyond this, Irving has made available to Powers his microfilm files on the subject. Together with much newly available material (including expanded though not complete access to the transcripts of recorded conversation among the German physicists during their internment in England in the summer and autumn of 1945), these documents permit Powers to build a case strong enough to raise permanently the level of debate on the subject.

Yes, the German physicists, with few exception, did have moral scruples about any serious efforts to produce nuclear weapons for the Hitler regime, and these scruples did have practical effect. "The implication that Allied scientists," Powers continues, "– many of them Jewish, many driven from Germany, many bereaved in the Holocaust – might have some moral obligation to answer questions posed, however indirectly, by Germans is more, as I have more than once experienced, than they are ready to tolerate in silence." Silent or not, this volume leaves them no choice in the matter.

This book actually blends two subjects, one somber and the other hilarious. World history, of course, was at stake in the vicissitudes of German nuclear weapons research. The might-have-beens are stupefying, and not an appropriate subject for the author's iridescent irony. Not so, by contrast, his lengthy account of the efforts of US wartime intelligence (chiefly "Wild Bill" Donovan and his Office of Strategic Services) to find out what the Germans were up to. On the basis of their Ultra decrypts (which contained not even the most tangential reference to a German equivalent of the Manhattan Project, nor any mention of Heisenberg by name), British intelligence concluded early in the game that there would be no German atomic bomb, whereas Americans feared the worst almost to the end of the war. These fears culminated, it seems, in an OSS plot to kill Heisenberg, though this was originally disguised as a kidnapping venture under the auspices of a desperado named Eifler. "It didn't require a professional odds-maker," Powers observes, "to see that the chances were remote at best that Heisenberg would survive a kidnapping in Germany, a forced march into Switzerland, a secret rendezvous with an American military plane and a parachute drop onto some map coordinate in the Mediterranean where a submarine might or might not be waiting. Eifler was left in no doubt that Heisenberg's survival was not the mission's highest priority." 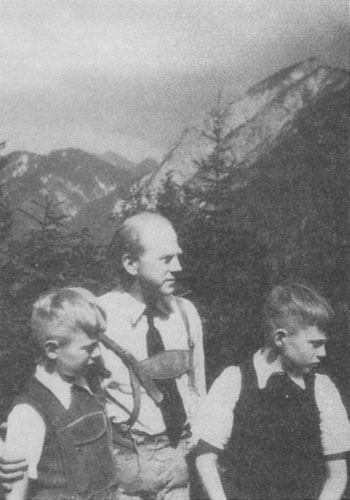 Werner Heisenberg with two of his sons, in the late 1940s. Awarded the 1932 Nobel Prize for physics "for the creation of quantum mechanics," Heisenberg headed wartime Germany's atomic research program. His work on the quantum theory profoundly influenced the development of atomic and nuclear physics.

How interesting that a mainline publishing house such as Knopf remains capable of issuing a book that does not demonize the Third Reich or engage in any of the customary myth-making. The burden that any totalitarian regime imposes on science is evocatively rendered, but without the implicit claims to moral superiority that have pervaded most prior writings on the subject from these shores, or the post-war denigrations by Heisenberg himself for his decision to remain in Germany. Heisenberg himself shines through the text as a deeply decent person – a bit tactless now and then, perhaps, and not long on humor, but compared, let us say, to J. Robert Oppenheimer, a paragon of stability and humaneness.

The book contains considerable duplication of material and would have benefited from one last editorial combing-out, but that is true of almost every product of American presses, trade or academic, these days. For the most part, German names and quotes are rendered accurately, a healthy contrast to current standards, though it is a bit disconcerting to find the name of Colonel Stauffenberg repeatedly misspelled. Even the most casual proofing eye should pick up this sort of error.

The story has a happy ending, although the author prefers to leave it implicit. German physics is again thriving, thanks in large part to the continuity Heisenberg maintained for it. This was his specific and avowed intention. Never anti-Semitic – his rivals in the 1930s termed him a "white Jew" at one point – he nonetheless believed it a German science, par excellence, which it is.

Truth is strong, next to the Almighty. She needs no policies, no stratagems, no licenses to make her victorious.
—John Milton