An Open Letter to The Daily Texan

On Tuesday, January 26th, the Texas Student Board of Operating Trustees rejected an advertisement submitted to The Daily Texan for my video about the Auschwitz concentration camp, "David Cole Interviews Dr. Franciszek Piper." An article the next day in The Daily Texan gave no reason for the ad's rejection. A former Hillel Foundation board member is quoted as being ENCOURAGED by the board's lack of discussion of the matter, saying that what Bradley Smith (who submitted the ad) wanted out of this was publicity. Interestingly, although I wrote and directed the video in question, I was not mentioned in the article.

For me, that's nothing new. I am not only a Holocaust "revisionist," that is, someone who is skeptical about the existence of homicidal "gas chambers" used to kill Jews during World War Two, but I am also Jewish. This tends to confuse people who have been told that anyone who dares to doubt any part of the orthodox "Holocaust" story is a de facto racists and anti-Semite. I happen to be neither of those things, and I support my stand on the Holocaust with years of my own research and decades of research by others. But, in fact, the Hillel board member was not entirely wrong when she spoke of revisionists wanting "publicity."

I have the unique problem of being associated with what might very well be the most often slandered movement in the Western world. many Western countries have gone so far as to pass laws specifically designed to criminalize "Holocaust denial." In my years as a revisionist I have been physically attacked and called every unpleasant name in the book. I've been edited out of TV shows and hung up on by newspaper editors. Now, I'm not whining. I chose to be a revisionist and I've always understood the risks inherent in stating so publicly. But that doesn't make the situation any less frustrating to me.

I don't enjoy the bad blood that surrounds the issue. As a Jew, I don't relish being called a "traitor to my people" or a "self-hating Jew." To me, the process of sorting out truth from wartime propaganda in a subject as extensive as the Second World War is like working on a tremendous, fascinating jigsaw puzzle. Frankly, I'm enjoying myself too much to give it up, whatever the consequences might prove to be. But there doesn't have to be such animosity. I ask only to be able to state my case, and if I'm wrong, I ask only to be told WHERE I'm wrong. Am I so evil when I ask that sincere questions about history be met with sincere answers, as opposed to personal attacks and insults? I truly believe that an objective examination of the facts, of lack of them, surrounding "gas chambers" will vindicate revisionists, myself included. Therefore I certainly DO want publicity. The sooner the public has access to the facts in this issue, the sooner, perhaps, cooler heads will prevail, and it can be discussed without so much hatred and violence. it has only been by keeping revisionist information from the public that those who oppose revisionism can so easily slander and harm us. As soon as the public understands that we have a legitimate point of view, attacks against revisionists, and the censoring of revisionist information, will be harder to excuse. That's why I'm putting such effort into distributing revisionist videos to the public.

Which brings me to the subject of my video. In September 1992 I went to Europe to investigate firsthand the sites of the alleged Final Solution, the concentration camps in which Jews and others were interned during the war. My first stop was the Auschwitz concentration camp in Poland, where the greatest number of Jews is said to have been "exterminated" in "gas chambers." The Auschwitz Main Camp plays host to over half a million tourist a year. During the week I spent working at the camp, the parking lot was overflowing every day with tour buses filled with school children, priests and nuns, Polish soldiers, and tour groups from Germany, Israel, France, America and even the Orient!

The centerpiece of the camp is a "gas chamber," displayed as genuine, and a favorite target for the tourists with their camcorders. Again and again I spoke with tourists who said they were filming the "gas chamber" to show people back home that the "Holocaust" DID happen, and to answer those who say it didn't. Indeed, this "gas chamber" is one of the main "proofs" used to refute revisionists, Pictures of it have been featured in numerous books and magazines. In Time-Life Book's massive multi-volume World War Two series, a picture of the "gas chamber" is used to show that gas chambers did exist. And, of course, there would be no better was to refute revisionists than to show them a genuine homicidal gas chamber. The trouble is, the gas chamber in question IS NOT GENUINE.

While I was at the camp (with my camcorder), I was able to film an interview with Dr. Franciszek Piper, Senior Curator and Head of Archives at the Auschwitz State Museum. Dr. Piper has worked at Auschwitz for 26 years and is a respected scholar and the author of many Holocaust books. Dr. Piper admitted to me on camera that the building exhibited to tourists as a genuine gas chamber is, in fact, a building that, at the time of the camps' liberation by the Soviet Army, was a German air raid shelter. After the liberation it was redesigned by the Soviets an Poles to "look like" a gas chamber. What makes Dr. Piper's revelation even more important is the fact that, just two days earlier, I had filmed an Auschwitz tour guide telling me EMPHATICALLY that this "gas chamber" is in its "original state." If nothing else, my video shows a clear deception; the Auschwitz Museum officials instruct their tour guides to tell tourists things they KNOW are not true.

Basically, my video deals with a question that I fell is perfectly legitimate: if the Auschwitz Main Camp "gas chamber" can no longer be considered proof of anything in its present state, what proof remains that this building was EVER a gas chambers? I feel that my video is exceedingly fair, and I defy anyone to find a single factual error in it. At no point do I attempt to suggest that, just because the Auschwitz Main Camp "gas chamber" is phony, EVERYTHING about the Holocaust is phony. Upcoming videos will deal with the other camps I visited and the "proofs" THEY exhibit for the "Final Solution." I have a sinking feeling that I'll encounter the same trouble advertising THOSE tapes as I do advertising "David Cole Interviews Dr. Franciszek Piper."

Which brings us to The Daily Texan. If my question to Holocaust supporters is, "If I'm wrong, just show me where," then my question to the many newspapers which have rejected revisionist ads is, "Why can't we have our say in a public forum, like any other group?"It is an odd rationalization we hear from journalists as to why revisionism doesn't belong in their paper; usually we are told that the newspaper in question can't publish revisionist information because we revisionists are simply WRONG, and the paper can't publish false or misleading information.

Now, if I'm not mistaken, journalistic ethics USUALLY dictate that it's proper to give readers BOTH sides of any given story, presenting the facts as both sides see them and letting the reader make up his or her own mind.In fact, "point/counterpoint" columns and TV shows, in which people who hold diametrically opposed views on a given topic battle it out, are all the rage. In printing both sides on an issue, it is simply taken for granted that one of those sides may be wrong or partially wrong, but that the final decision is left to the reader. As far as I know, revisionism is the only subject where journalists are expected, ENCOURAGED, to decide what the "truth" is and act as its guardian, ADVOCATING one point of view and suppressing dissent, as though it were their job to DECIDE controversies rather than REPORT them.

The ad for my video is not racially offensive or factually incorrect. Might it upset Jewish people?—perhaps, and for that I'm sorry. I find it ironic, however, that, if I had made a video debunking the post-World War Two atrocity stories about the Japanese (in war crimes trials that were every bit as "fair" as the Nuremberg trials, Japanese "war criminals" were convicted and hanged for cannibalism and other atrocities, and these "atrocities" were confirmed by "eyewitnesses" and "confessions," just like at Nuremberg), there wouldn't be this outcry, and I might well be hailed as a hero by various "multi-cultural" student groups for fighting against vicious racist lies!

However, because my video casts doubt on a story that is of great emotional importance to the Jewish community, Jewish groups, using whatever means they can, try to prevent public access to my video. I want to make it clear that I don't blame these groups for trying to censor me; it is the nature of ANY advocacy group (religious, ethnic, ideological, etc.) to do what it deems necessary to protect what it sees as its own interests. The people I have very serious problems with in this matter are newspaper editors and publishers, who have a different responsibility; to RESIST special interest group pressure. On this count, The Daily Texan has betrayed its responsibility to its readers. 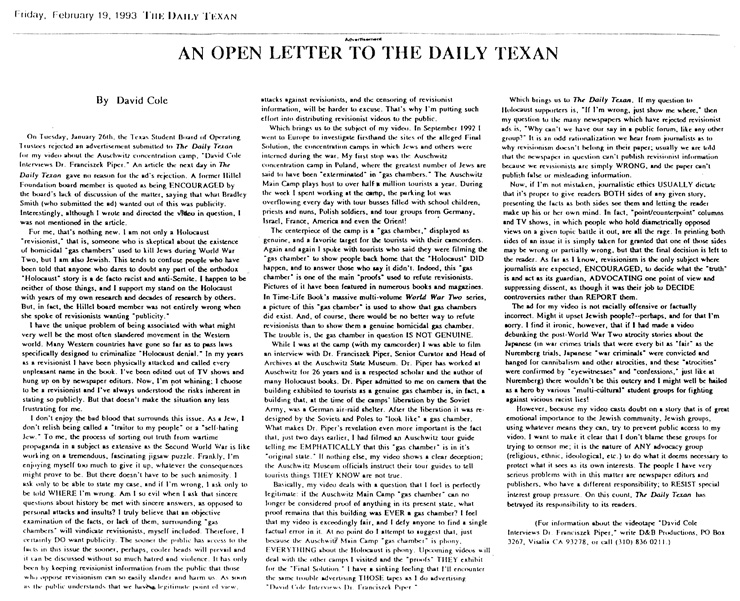 See also the response by Dr. Fanciszek Piper of October 21, 1993