Bulldozing the Façade of Israel As Victim

Michael Hoffman, Moshe Lieberman, The Israeli Holocaust against the Palestinians: A Chronicle of War-crimes and Atrocities against People Judged Less Than Human by the U.S. Government and Media, Independent History and Research Co., Coeur d’Alene 2003, 110 pp., paperback, $12.95. 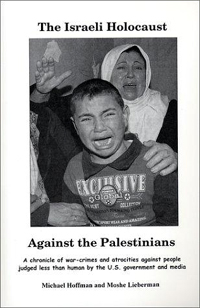 During the past several years, the State of Israel has made crystal clear that it will not stand for a Palestinian state. The Israelis have recently been signaling that even a Palestinian homeland in the rump districts West Bank and Gaza, honeycombed as these are by Israeli colonists, is unacceptable. And now it seems as if Israel is gearing up to "transfer" (i.e., expel) the bulk of the Palestinians, perhaps during a future Mideast distraction, from what remains of their ancestral country.

The evidence of these Israeli intentions has been rather more forceful than official statements or diplomatic communiqués: since September 2000 Israeli troops and police have violated Muslim shrines; invaded Palestinian territory; shot down youthful demonstrators; shelled, rocketed, and machine-gunned civilian settlements with U.S.- provided ordnance; cold-bloodedly murdered suspected adversaries and civilian bystanders alike; hauled off thousands of Palestinians to concentration camps, where many of them have been tortured; taken hostages for use as human shields during their forays into Palestinian towns; blown up or bulldozed the homes of relatives of alleged guerrillas in a Sippenhaft policy reminiscent of the latter days of the Third Reich; and destroyed as much of the Palestinians’ economy as has seemed practical. All this at a time when Israel’s chief sponsor, the United States of America, was becoming embroiled in an international war of terror in which at least appeasing, if not winning, the hearts and minds of a large majority of the world’s one billion Muslims is crucial to success. Nonetheless, the facts and the implications of Israel’s treatment of the Palestinians have been so expertly spun, and spiked, by America’s media that most Americans remain fixated on the sporadic Palestinian terror attacks against Israelis rather than the far bloodier policies that provoke them.

Michael Hoffman, a seasoned journalist, and Moshe Lieberman, a researcher for the late Israeli dissident Israel Shahak, go a good way toward setting the record straight in The Israeli Holocaust against the Palestinians. Part compilation of previously published reports by objective journalists from around the world, part sharp and sometimes impassioned analysis, and part historical background, the book provides compelling and graphic evidence in pictures and print of the ongoing atrocity of Israeli policy toward the Palestinians. The authors might perhaps have better organized the medley of different articles and chapters in The Israeli Holocaust against the Palestinians. Yet the interweaving of reportage on such specific incidents as the destruction of Jenin and the Israeli shelling of the Church of the Holy Sepulcher in Bethlehem with critiques of how U.S. policy makers enabled these crimes and American media misreported the facts makes for a satisfying and often informative texture.

The potential appeal of The Israeli Holocaust against the Palestinians is somewhat reduced by the tone of the book, in which justified anger sometimes gives way to shrillness. Chapter titles such as "The Bethlehem Church Fire and Talmudic Lies" and political judgments such as "The Right-wing in America, properly described as ‘kosher conservative’…" (p. 11), as well as passages that breathe a Delphic conspiratorialism ("In this, the Cryptocracy’s Revelation of the Method era…" p. 9), fairly well assure that this book’s impact will largely be on those already open to informed and forthright condemnations of Israeli brutality and American complicity. Nonetheless, even at its most impassioned, Hoffman’s writing in The Israeli Holocaust against the Palestinians is nearly always informed, and above all (so rare a commodity in most writing on this topic!) interesting.

As with most books "mainstream" publishers wouldn’t touch, the design is amateurish, though the covers are arresting and the binding seems strong. While $12.95 might seem steep for so short a book, all in all The Israeli Holocaust against the Palestinians is a bargain at that price and well worth buying and reading.