William Saunders is the pen name of a British-born specialist of international finance, economics and social and political affairs. He lives and works in central Europe. This review is his first contribution to the Journal.

This important and regrettably little-known book has a twofold purpose, the author tells us in his introduction. The first part "describes resurgent conservative movements in Europe and their intellectual heritage." Here Dr. Sunic is concerned with the relationship between the Continental European New Right of today and its mentors, including Carl Schmitt (1888-1982), Oswald Spengler (1880-1936) and Vilfredo Pareto (1848-1923), the most lucid of these being Pareto. But these are just three chosen by Sunic from among many other forerunners of the New Right (see pp. 40-41). These thinkers clearly saw the disastrous consequences of the trend toward universalism that was already well underway in the decades before the Second World War. 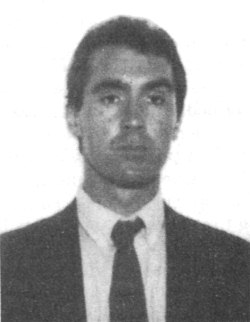 In the second part of his book, Dr. Sunic presents a reasoned attack against egalitarianism liberal capitalism, "economism," and socialism – in short the "Revolt of the Masses" in the well-known formulation of Ortega y Gasset.

The author is a Croat, with a good knowledge of German and French, and a reasonably good knowledge of English (having lived in the United States fo: many years). He received his Ph.D. in political SCIence at the University of California, Santa Barbara, and for a time taught at Juniata College in Pennsylvania.

The European Right is, and was, a reaction agamst Communism, egalitarianism, welfarism and the social uniformity of liberal societies. But at the same time, it embraces some of the ideas previously associated with the Left. The basic message is that egalitarianism leads inexorably to totalitarianism. The reason for this, I would add, is because equality does not exist in nature and so it must be imposed if it is even to be approached.

Dr. Sunic notes the tendency of theorists on the European Right to present a wide variety of ideas, not all of them compatible by any means. But these

ideas help to decompose the stereotype of the "fascist" with a small "f" and get the theorist of the Right off the hook, so to speak. Still, it is clear that intellectuals of the Right have had much more freedom to express their ideas in France than in Germany, or even Italy. The media campaign to force the French to "come to terms" with the Vichy regime IS mspired by the fear that intellectuals such as Alain de Benoist (the foremost theorist of the European New Right) may be getting away with too much. [See the interview with de Benoist in the March-April 1994 Journal.]

Sunic is at great pains to emphasize the difference between the European New Right and the American equivalent: "The message of the New Right is simple: egalitarianism, economism, and universalism, when left unchecked, set the stage for most horrendous form of totalitarianism communism." Well, it is the American Tomislav Sunic Declaration of Independence that enshrines Jefferson's absurd principle that "all men are created equal" while modern America has reached the culmination of economism in the foz:m of consumerism, and actively promotes the creation of a culturally undifferentiated multiracial biomass.

But communism has collapsed, and for a reason explained by Friedrich von Hayek. When I say "communism," I do not mean the anarchist millennium of communism, when the state has "withered away," but the communist reality, particularly in the Soviet Umon and eastern Europe, which was oppressive state socialism. Hayek explained that it had to collapse because it fixed prices. Even if fixed prices are correct at the moment of being fixed, they w1l1 tend to be eIther too high or too low within a short time. This leads to a black market in underpriced goods (sausages in Moscow, for example) and a glut of over-priced goods (such as matrioshka dolls). While Hayek – one of the Austrian Economits – is very little known in Europe, he is studied WIth reverence at a number of American universities.

European New Right theorists see Americanism as an even more dangerous enemy than communism. In The End of History, a much-discussed book written after the collapse of communism, Francis Fukuyama claimed that Americanism would take over the world. Many Europeans feared that hE! might be right. But the argument does not hold water. In fact, the US and USSR were each able to control large areas of the earth because together they were able to maintain a potential balance of terror. Now that one of the protagonists has fallen flat on his face, the other is likewise left face down, like a playing-card that had been held up by another one leaning against it. That is why official representatives of the American and British governments are unwilling to condemn "fascist" members of the Italian government. After all, they were democratically elected, right? (I can think of other likeminded persons who, half a century ago, were similarly democratically elected!)

Besides, a diseased system produces its own antibodies ifit is to survive, and it is Americans who are the most effective critics of their own system. To make a point in favor of the US Constitution, the First Amendment permits Americans to air views that in Europe are forbidden by law. It harks back to the powerful arguments in favor of the free clash of ideas expressed in Milton's Areopagitica. Without this free clash of views, historical revisionism would be in a poor way indeed. Sunic admits (p. 41) that "even the United States" has produced a number of "conservative revolutionaries," and cites Lothrop Stoddard, Madison Grant, Francis. Yockey, and James Burnham as examples. One should not judge American conservatism by the Christian Fundamentalists or the neo-cons.

Sunic is good on the Nouvelle Droite in France, with its rejection of communism, liberalism and the Judaeo-Christian heritage, and its attachment to Europe's pagan, pre-Christian past. He shows that some of its ideas, such as the dismantlement of the Western Alliance, are those of the Left. I fear that continental New Right's emphasis on how "a sense of community must invariably preside over individualistic and economic self-interests" (sic) – that is, that the political must always take precedence over the economic – also means that it sides with the Left in the matter of taxes. In this respect it parts company with the Anglo-American Right, which has a long and honorable anti-tax tradition. But note that continental right-wing political leaders such as Mogens Glistrup (former leader of the Danish antitax party) and Jean-Marie Le Pen (leader of France's Front National) have suggested doing away altogether with income taxes. What is more, Le Pen acknowledges his debt to the American right. When de Benoist talks about "soft" American totalitarianism air-conditioning hell and killing the soul, while creating "happy robots", he does. not acknowledge his debt to Aldous Huxley and his Brave New World.

A great deal depends on how we interpret the attacks of de Benoist and his friends on the AngloAmerican concern for "economic utility and efficiency." Ifby this is meant mass production methods and the lowest-common-denominator advertising, then it is obviously pernicious. Subsidiarity, as defined in the papal encyclical Rerum Novarum and restated by the present Pope, is the watchword ifwe want to promote the quality of life. But economic efficiency can (and should) be redefined to take account of such necessary concerns as the environment and customer satisfaction. Just as Sunic shows how Jewish elements in France have diabolized, caricatured and vilified the Nouvelle Droite, so the Nouvelle Droite is in danger of doing the same to right-wing Anglo-Americans who might easily be their allies. On the other hand (p. 27), some of de Benoist's most vicious critics, such as Georg Wolf (of the German weekly Der Spiegel) and Maurice Duverger (a former disciple of Jacques Doriot), not to speak of Paul de Man (of Deconstructionist fame) are, or were, fascists.

A very important chapter, "Gramsciism of the Right," refers the need for the Right to go on a "long march through the institutions," in imitation of Antonio Gramsci's left-wing disciples. However, Sunic's chapter on "The Pagan Right" fails to emphasize the essential difference between the Judaeo-Christian spirit, which is essentially moralistic, and the Greek spirit, which was essentially aesthetic:

"Beauty is truth, truth beauty" – that is all
Ye know on earth, and all ye need to know.

Not till the ugly, degenerate twentieth century did the metaphors of the poets cease to draw on the riches of Greek mythology. Still, this chapter contains some very fine insights, as when Sunic quotes Ernest Renan on Judaism's essential monotheism deriving from the desert (p. 74), or when he contrasts the heroic spirit of paganism with the guilt tradition of Judeo-Christianity (p. 75), and contrasts the pagan notion of eternal recurrence with the Jewish notion of progression towards a final millennium (p. 76). (The same could be said of Islam.) Catholicism, on the other hand, as de Benoist says, owes its manifestations of the sacred to its absorption of pagan traditions.

The second part of Sunic's book, on "The Egalitarian Mystique," contains a great many insights from the author's wide reading in history, anthropology, ethnology, philosophy, and economics. It deserves to be read with thought and attention to detail.

Modern computers contain spelling checks that offer alternatives to obvious mistakes and would enable the author to avoid such typological errors as "inuendos" (p. 49), "milennial" (p. 129), though not the term "Carolinian" (where "Carolingian" is indicated, p. 53), or expressions like "the reigns of power" (p. 63) and "individualism reins supreme" (p. 139). But these are merely irritating flaws in a work I recommend highly. I can think of no other book that contains so many right-wing views conflated in such a masterly manner.