"Genocide" by Shovel and Sewing Machine

Michael Thad Allen is assistant professor of modern German history and the history of technology at the Georgia Institute of Technology in Atlanta. Despite its burlesque title, The Business of Genocide is an important study of the SS from a technocratic viewpoint and develops the existential conflicts within the WVHA (Wirtschaft- und Verwaltungshauptamt), thus providing a clearer picture of a neglected aspect of German National Socialist institutions and the evolution of inexorable wartime practices. Specialists should find plenty of interest.

The WVHA was the economic and administrative office of the SS, which Albert Speer notably accused of conspiring to "infiltrate" the supposedly apolitical German technical professions with National Socialist fundamentalists and hacks, only to wring profit and genocide from the exploitation of slaves. Allen undoes Speer’s shopworn thesis but attempts to paint an even darker picture of a German economy gearing for total war that instead came willingly to an eager SS to utilize its mushrooming pool of prison labor. Thus the SS is no longer the ‘alibi’ for a German nation now intent to distance itself from wartime extremes considered crucial at the time when the alternatives were victory or unconditional surrender. Allen’s Holocaust thesis is essentially functional, that the SS attempted to evolve a means for deriving production from the purgation of the State’s enemies, thus melding the seemingly divergent needs for forced labor and genocide, for an "extermination through work."

Arbeit macht frei (work liberates) was the slogan of Theodor Eicke, founder of the first National Socialist Konzentrationslager at Dachau, subsequently brought by Concentration Camp Inspectorate disciples such as Rudolf Höß to Auschwitz; it represented both a sincere belief in manual labor for the therapeutic incarceration of the German criminal or political prisoner and a cynical belief that many of the State’s enemies were in need of such purification. Before the war, asocial prisoners were punished with desultory camp-keeping tasks or heavy labor in order to break the will of the hardened criminal and political prisoner. What Höß called the "Dachau school" of camp commanders never saw or quite understood the value of forced labor when it eventually became economically valuable and utterly essential to the war effort. When Eicke left "pencil pushing" for his real passion, raising the SS-Totenkopf division to fight the war with a cadre of "political soldiers," Richard Glücks succeeded him as head of the Concentration Camp Inspectorate, and remained perhaps the most incompetent and indolent of all the SS high-commanders. 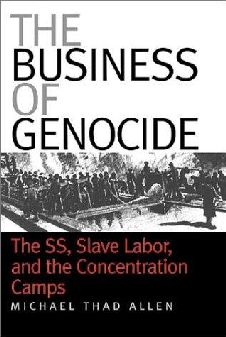 Oswald Pohl, head of the WVHA, provides an example of the second of three groups of SS managers studied. Allen shows that the SS were mostly not opportunists, as has been voluminously said of them; however, SS managers in this second group were nevertheless generally inefficient hacks and often corrupt. Unlike Glücks, Pohl was a beehive of energy. A former navy paymaster, Pohl was overall competent but sometimes lacking in judgment when appointing subordinates, and not altogether competent technically for the tasks the WVHA increasingly found in its scope.

The National Socialist tended to be a lower middle-class movement which was enamored with technology and modernity for its own sake. If their Führerprinzip and anti-capitalist inclinations are judged as anti-modern by tendentious historians today, this is misleading, for theirs was only a different vision of modernity. The Weimar regime had only showed what could not be done with latent German professional talent; the National Socialist state showed the sky was the limit for the German engineer and architect of the future. They did not see themselves as un-modern, nor were they generally hypocritical opportunists and ‘banally evil’ yet perversely brilliant bureaucratic cogs. Most wives of SS technocrats, for example, were professionally educated themselves and shared NS political values. The SS elite were essentially "productivist" idealists who saw the role of the economy not as bringing profits to a plutocracy or adhering to the soulless dogmas of ‘the salesman’s point of view,’ but instead as manufacturing German culture itself. They had great confidence in the virtue of German blood and German soil, however defined. Too much has been made of the ‘polycratic’ nature of the National Socialist government. Professor Allen shows that this hackneyed paradigm of bureaucratic chaos only underscores the variegated opportunities for National Socialist competitors to cooperate in realizing their shared ideals and common national goals.

Diverse SS experiments and enterprises would largely have failed without state support. The WVHA basically operated as a state corporation which generated bricks and stone for SS and Party construction projects—with dreams of utopian SS housing settlements in colonized lands. Most SS managers did not understand the nature of their own unskilled prisoner labor force and didn’t care to. A project to install high-technology and process-sensitive kilns at Sachsenhausen, for example, was a spectacular failure. However, low-tech tools such as sewing machines at the women’s camp of Ravensbrück, and rock hammers or even ordinary picks and shovels for quarrying (and later tunneling), were quite successful with the available prisoner labor force—these tools being developed for a labor-intensive and essentially unskilled piecework industry to begin with, rather than a highly motivated modern labor force with a low rate of turnover.

Before the war, the concentration camp population was low, rarely exceeding twenty-five thousand. But due to the increasing scale of German rearmament and the growing peacetime labor shortage, the SS found that its pool of prisoners had some value in a labor market that ordinarily would have been categorically rejected as ‘slaves’ competing with free German labor. The SS supplied its quotas of bricks and stone and garments more or less as needed. That it didn’t really turn a traditional ‘profit’ with its prisons bothered few.

The war changed everything, and the labor-camp population exploded. In went a supply of prison labor and out came building materials for a war economy that couldn’t get enough. When the SS wanted the gigantic bag of Soviet prisoners of war from the Barbarossa invasion, it found by the end of 1941 that those promised had largely already perished of exposure and neglect at the hands of the Wehrmacht and the General Staff, which had not planned for reversals and a long winter war. Yet the SS itself rarely proved creative except at radicalizing general sentiments, and never really came to grips with its own prisoner resources as it tried during the subsequent years of "total war" to rationalize its impressed slave labor to victory. As long as a constant supply of prisoner labor from security sweeps or police intakes could be found, out came the "product," grimly or not.

The third group, and most interesting, are the extremely competent and highly motivated German engineers, led by Dr.-Ingenieur Hans Kammler, a military civil engineer who had been recruited from the Luftwaffe by Himmler to lead Amt-C, the WVHA’s construction department. Dr. Porsche came enthusiastically to the SS looking for help building military Volkswagens. Even General Dornberger, inventor of the V-2 ballistic missile, which was later fired in combat by General Kammler’s men, came humbly to the SS looking for miracles. Far from the Faustian bargain described by Speer and lamented by Dornberger, the SS generally delivered what was asked and then some. Eventually Kammler came to head all German secret weapons projects, including turbojets.

Dr. Kammler’s office built the crematoria at Auschwitz, and, using prisoner labor, relentlessly dug the tunnels at Nordhausen in which the German secret weapons were mass-produced. He used skilled crews and high-tech equipment when he could get them, otherwise using unskilled labor gangs to greatest effect—his enemy being time itself. Excluding perhaps the Soviet atomic program, the V-2 rocket was possibly the most costly modern weapons system in terms of lives lost in its manufacture, about ten thousand, compared to the enemy lives it took in operational use, about 2,500. But in all fairness, the involvement of the SS in mass production of the weapon by digging tunnels for its assembly came only as a result of Allied bombardments, and the V-2 itself was built as a deterring payback to Allied bombing in the first place. Few prisoners died on the actual assembly lines, which were directed by Albin Sawatzki, Arthur Rudolph, and other capable industrial managers; the work was too precise for carelessness and even skilled ‘slaves’ had essential value and were treated accordingly by the SS.

Classification as "fit for work," using modern statistical accountability, was introduced by Gerhard Maurer. Though far from meeting industrial standards, it kept intransigent commandants focused on the vital war effort, and could mean the difference between life and death for a prisoner. Competent or not, the SS was not inclined to properly feed and house "useless eaters." Kammler would not have needed gas chambers; he simply could not use those who could not work, and scarce rations were allocated accordingly. The Boelcke-Kaserne was essentially a death camp where the Dora-Mittelbau project’s unfit for work were left to expire in short order. This begs the question as to why other SS commanders allegedly needed poison gas to kill unfit prisoners.

The history of the WVHA is one that shows the scope of ruthless wartime measures, but SS jurisdiction was only a small part of the German war economy, a quarter of which comprised labor-conscripts, mostly foreigners. The SS did not force slavery upon German industry, nor corrupt an apolitical technocracy with some sort of fundamentalist creed of killing. Allen predictably concludes, however, that the WVHA developed "extermination through work" in the fullest sense of the term, giving precedence to neither murder nor production, but insouciantly accommodating each in equal measure.