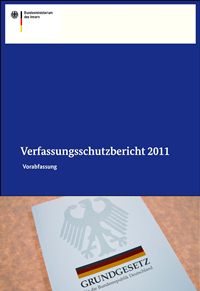 Every year the German government proudly presents the numbers of peaceful dissidents it persecutes, which it lumps together with violent criminals as "enemies of the [German] constitution." Never mind that Germany doesn't even have a constitution...

On July 18 of this year, the German government released the figures of government prosecutions for the year 2011 as printed in its Report on the Protection of the Constitution (Verfassungschutzbericht). According to this, 13,865 criminal investigations were launched in 2011 against individuals for either committing "propaganda offenses" (11,401 cases) or for saying or writing something that was deemed capable of "stirring up the people" (2,464 cases; see p. 28 of the new Report). That is a 1.5% increase in cases compared to the previous year (13,663 cases total in 2010). All of these offenses are grouped under "right-wing extremism." The lists of offenses committed by left-wing extremists or foreign extremists do not have these categories, which basically means that only patriots, nationalists and the like can commit such "thought crimes" in Germany. After all, "right-wing," "Nazi," and "evil" are synonymous in Germany. The German penal law even implicitly states that only right-wingers can commit "thought crimes." This makes Germany the only country in the history of mankind where expressions of love for one's country, which in many cases is socially unacceptable anyway, has actually become illegal under many circumstances. 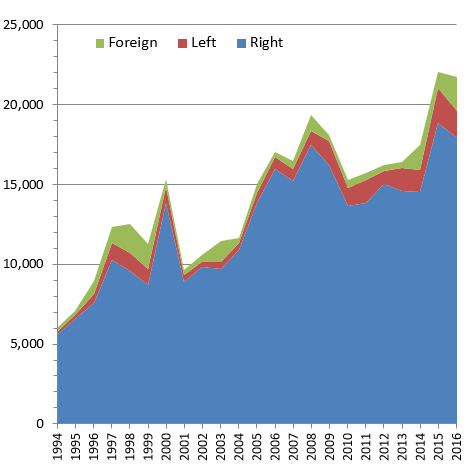 Number of criminal investigations initiated each year in Germany for "propaganda offenses" or "stirring up the people." These categories don't exist for left-wing or foreign crimes; for them, we show all cases listed indiscriminately as "other crimes." Chart updated to include the most-recent available data from the German government

The chart to the right shows the trend of the prosecution of "thought crimes" in Germany (blue area); left-wing (red) and foreign offenses (green) are only listed as "other offenses" in the above-mentioned Report, so it's not clear whether and to what degree these offenses include "thought crimes." The chart shows that the persecution of patriots and nationalists in Germany has become increasingly severe over the past 18 years and remains at a high level. Since 1994, almost a quarter-million criminal investigations for "thought crimes" have been launched by the German authorities. It is not stated how many of these investigations led to indictments and convictions, though.

Germany, being the nation of perfectionism, has also perfected the persecution of dissidents. Many other nations shamefully hide their numbers of prosecuted dissidents, or even the very fact that such things occur, but not so Germany. The entire nation has been inculcated with the idea that aggressively defending "democracy" is an enterprise morally justifying the relentless suppression of those tagged as "enemies of the Constitution." The zeal with which many, if not most, Germans ostracize individuals and organizations listed by the German government as such enemies in its yearly Report is mind-boggling.

Germany's legal system has also contributed to this "perfection," starting with the fact that German courts of law do not prepare verbatim records of their proceedings, which enables the judges to claim just about anything about what happened in court, with no legal recourse for the defense against any distortion or lie written down in the verdict. Even defending oneself can be a criminal act in Germany, if a defendant is accused of a "thought crime": Any attempt at introducing evidence aimed at proving the truthfulness of statements having led to the prosecution in the first place are deemed illegal, as they aim at repeating the very crime for which the defendant is on trial. After all – as politicians, the mass media and also the prosecution argue – in such cases the defendants are trying to "misuse" a public government event (the trial) to spread their evil views in plain view of the public at large and in the presence of mass media. Therefore Germany is, as far as we know, the only country in the world where defending oneself has actually become illegal in certain cases, punishable by law and with imprisonment of up to five years! Even defense lawyers, acting on behalf and in the best interest of their clients, have been charged and convicted for merely filing a motion to introduce evidence meant to support the – allegedly evil – views of their clients. And that's not the end of it: Since some defense lawyers then resorted to publicly decrying these scandalous conditions during trials, the government swiftly passed a law permitting a court to gag lawyers during a trial if they make statements "not pertinent to the case." So now the defense keeps mum in Germany during trials against dissidents – which in almost all cases involve perceived right-wingers.

The U.S. government, together with almost all goverments of the world, considers the German legal system to be highly sophisticated, of high legal standards, and of high international repute. They are either blind or colluding.