Germar Rudolf on Revisionism in Germany and the United States

Recently Germar Rudolf, the young German chemist whose investigations at Auschwitz and Majdanek both vindicated and improved on those of Fred Leuchter, visited the United States. Supporters of the Committee for Open Debate on the Holocaust, including CODOH director Bradley Smith, were able to meet and talk with Rudolf on several occasions, including at the Institute for Historical Review’s mini-conference in Costa Mesa on June 26. Afterwards, Smith’s Report conducted the interview that appears below.

By way of introduction, a few facts about the extraordinary career of this German scientist and combatant for free inquiry and open debate: Germar Rudolf was born on October 29, 1964 in Limburg, Germany. He was graduated with highest honors in chemistry from the University of Bonn in 1989. After completing basic training with the German air force, Rudolf did his doctoral work at the Max Planck Institute [for Solid State Research] in Stuttgart. Despite glowing recommendations, his dissertation was rejected in the summer of 1993, when his work in corroborating the findings of the Leuchter Report had become known. 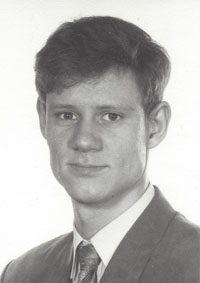 Germar Rudolf began research on the Leuchter Report in the winter of 1990-91. In 1993, the results appeared as the Rudolf Report. The following years have seen publication of half a dozen books authored or edited by Rudolf on numerous aspects of the Holocaust controversy, most notably Grundlagen zur Zeitgeschichte (Foundations of Contemporary History). Grundlagen, published in Germany by Grabert in 1994, includes what is often still the latest word by revisionist scholars such as Rudolf, Faurisson, Berg Weckert, Mattogno, Walendy, et al. on the major topics of interest to Holocaust revisionists.

Germar Rudolf’s incisiveness and energy inevitably made him the target of German prosecutors. In 1996 he went into exile with his family to avoid [further] conviction and imprisonment. In the same year, all unsold copies of Grundlagen in Germany were seized and burned by court order.

Rudolf currently makes his home in Great Britain, where he publishes the quarterly revisionist journal Vierteljahreshefte für freie Geschichtsforschung and is the proprietor of Castle Hill Publishers (PO Box 118, GB-Hastings TN34 3ZQ). The long-awaited English language translation of Grundlagen is scheduled for later this year [it appeared in August 2000: Dissecting the Holocaust; ed.]. Until then, a preliminary English-language translation of Grundlagen may be seen on CODOHWeb, while that and other of Rudolf's works, such as Auschwitz: Nackte Fakten and Der Fall Rudolf may be consulted at the Website www.vho.org, as well as on CODOHWeb.

SR: As author of the Rudolf Report, editor of the books Grundlagen zur Zeitgeschichte (Foundations of Contemporary History), Auschwitz: Nackte Fakten (Auschwitz: Naked Facts), Kardinalfragen zur Zeitgeschichte (Cardinal Questions about Contemporary History), editor of the Vierteljahreshefte für freie Geschichtsforschung (Quarterly for Free Historical Research) and publisher of several revisionist books of other authors, you have been perhaps the most productive revisionist researcher of the 1990’s. Do you believe much more revisionist research needs to be done, and if so, in which areas?

GR: First let me correct you. The only time I really did research was between 1990 and 1993. Since then I have been an editor and publisher, a coordinator of research and publishing. The most productive revisionist researcher of the 90’s has been without any doubt the Italian, Carlo Mattogno.

I think that science is the only real perpetuum mobile. So I am quite convinced that there will always be something to be explored After the collapse of the Soviet Union, many archives in Eastern Europe remain to be investigated. On-site excavations at alleged extermination camps or mass execution sites may be possible in the future. We have discovered a gigantic archive with Luftwaffe aerial photos of the eastern territories, which may reveal new insights into many of the atrocity claims put forward by so-called Holocaust survivors.

We would like to go through the huge mass of “survivor” literature in order to look for the reliable content in it, as when they talk about theaters, sport fields, leisure activities, swimming pools, well-equipped hospitals, operas, kindergartens, choruses, libraries, etc. We need to show the internal contradictions when it comes to the usual atrocity stories. We have now the entire files of several major court cases in post-war Germany against Germans who were accused of mass murder in concentration camps. We have received an enormous amount of information on the Auschwitz medical department, which, for example, tempts us to rewrite the history of Dr. Mengele, who, according to the documents available now, was not the “death angel of Auschwitz”, but rather the “healing angel of Auschwitz.”

Finally, due to our ever-increasing information, we are more and more in a position to rewrite the history of all the major concentration camps in exact detail. So there is a lot of work ahead.

SR: While Grundlagen was seized and burned in Germany by court order, and you are a fugitive from German justice for offending against your country’s censorship laws, we Americans are subject to what Harry Elmer Barnes called the “historical blackout and smotherout.” Do you think Holocaust revisionism has a better chance of an initial major breakthrough in the U.S., in Germany, or elsewhere?

GR: Holocaust revisionism must never, never succeed in Germany first. A revisionist breakthrough in Germany regarding the Holocaust would almost certainly be followed by political revisionism, and that could very well lead to a final destruction of Germany by its “friends,” e.g. maybe with a few atom bombs.

That would be more or less equivalent to what the Allies did to Germany after World War I, when revisionism succeeded there, and was followed by political revisionism. Holocaust revisionism must succeed in the world’s leading nation, the United States, or it will never succeed.

SR: Aside from its martyrdom in Germany at the hands of the book burners, what makes Grundlagen so important a book?

GR: Since Arthur Butz’ book The Hoax of the Twentieth Century was published in 1976, no book has appeared in the English language giving an update on the state of the art in Holocaust revisionism. I think it is extremely important to have such an update of The Hoax at the end of the twentieth century.

SR: Could you briefly differentiate between the merits of the Leuchter Report, the report of the Krakow forensic institute, and your own report on the alleged gas chambers of Auschwitz?

GR: Leuchter triggered an enormous increase of research on this topic on both sides of the gas chamber question, especially regarding the physical evidence. There are important deficiencies in Leuchter’s report, but that is quite normal for an expertise that had to be prepared in so short a period of time, on such a complicated matter, which nobody could master totally starting from scratch, as Leuchter had to.

Because the Poles from Krakow did not understand how long-term stable cyanide compounds could possibly develop on walls exposed to hydrogen cyanide (Zyklon B), they decided to use a method of analysis for their samples which cannot detect these long-term stable compounds. These are known as Prussian blue or Iron Blue, the dyestuff that colors the walls of the Auschwitz, Birkenau, Stutthof and Majdanek delousing chambers. If a scientist doesn’t understand a phenomenon, deliberately ignores the well-founded explanations offered by others, does not make any attempt to understand, and consequently chooses a method that is incapable of detecting what needs to be detected—all of this in order to produce desired results—then this is nothing but fraud and deception.

In my report, I simply try to cover all the questions left unanswered by Leuchter, and try to discuss all the objections brought forward by friends and foes, on the chemistry, physics, architecture, toxicology, and many other topics. An updated English language version is due the beginning of 2000.

SR: CODOH and other revisionist individuals and groups have established sites on the World Wide Web to offer material to revisionists and non-revisionists. Do you think such Websites are having an impact?

GR: Research makes sense only if it has an impact, and since the Internet is the only mass medium which is open to revisionism, it is the only way for us to go, really. We have no choice.

SR: Were you impressed by Samuel Crowell’s The Gas Chambers of Sherlock Holmes?

GR: It is a very important attempt to explain how the mass gassing claims evolved and how they became an “unquestionable feet” of our societies. It is the first time that this has been done. After peer review, I would be willing to publish it in the publishing house I am currently setting up with a good friend in the US.

SR: Bradley Smith and CODOH have specialized in outreach to non-revisionists rather than in scholarly research. How important do you regard CODOH’s work in placing revisionist ads in college newspapers?

GR: This approach to the young intellectuals, the coming ruling class of the world’s leading nation, is something very important and it definitely should be [continued??? Bad editing led to this article being cut short. It is unknown what is missing here; ed.]