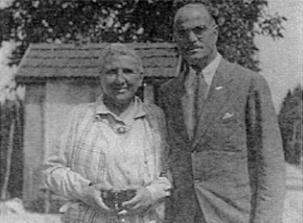 Scholars of the life of Gertrude Stein were recently startled to learn that in 1938 the prominent Jewish-American writer had spearheaded a campaign urging the Nobel committee to award its Peace Prize to Adolf Hitler. This was disclosed by Gustav Hendrikksen, a former member of the Nobel committee and now professor emeritus of Bible studies at Sweden’s Uppsala University, in Nativ, a political magazine published in Israel. (Reports about this appeared in the New York Jewish community weekly Forward, Feb. 2, June 14, and Oct. 25, 1996.)

Hendrikksen, an avowed friend of Israel who is now in his late 80s, recalled that the Nobel committee rejected Stein’s proposal “politely but firmly, citing among their reasons the attitude of the Nazi regime toward the Jews.”

In the decades before her death in 1946, Stein was a widely acclaimed literary icon. As monarch of the “lost generation” of American expatriates in Paris during the 1920s and 1930s, she cultivated and influenced such literary figures as Ernest Hemingway and F. Scott Fitzgerald, as well as such artists as Pablo Picasso and Henri Matisse. Her Paris home was a mecca for writers and artists. Stein’s own “modernist” novels, memoirs, lectures and plays – once celebrated as stylishly avant garde – have not aged well. Today she is remembered almost as much for who she was as for what she wrote.

Born in Pennsylvania of a wealthy German-Jewish family, she was raised in the United States, and attended Radcliffe and Johns Hopkins universities. But it was during her years of expatriate living in France that she made her lasting mark.

‘Hitler Ought to Have the Peace Prize’

Stein’s seemingly paradoxical views about Hitler and fascism have never been a secret. As early as 1934, she told a reporter that Hitler should be awarded the Nobel peace prize. “I say that Hitler ought to have the peace prize, because he is removing all the elements of contest and of struggle from Germany. By driving out the Jews and the democratic and Left element, he is driving out everything that conduces to activity. That means peace … By suppressing Jews … he was ending struggle in Germany” (New York Times Magazine, May 6, 1934).

As astonishing at it may seem today, in 1938 many credited Hitler for his numerous efforts to secure lasting peace in Europe on the basis of equal rights of nations. After assuming power in 1933, he succeeded in quickly establishing friendly relations with Poland, Italy, Hungary and several other European nations. Among his numerous initiatives to lessen tensions in Europe, the German leader offered detailed proposals for mutual reductions of armaments by the major powers.

In a 1940 essay, Stein wrote positively of the appointment of “collaborationist” Henri Philippe Petain as France’s Chief of State, comparing him to George Washington. As late as 1941, she was urging the Atlantic Monthly to publish speeches by Marshal Petain, which she had translated into English. In spite of her background, Stein continued to live and write in France during the years of German occupation (1940–1944).

She also maintained a friendship with Bernard Fay, who headed France’s national library, the Bibliotheque Nationale, during the Petain era. According to a new biography of Stein, Favored Strangers: Gertrude Stein and Her Family, by Linda Wagner-Martin, Fay and Stein often discussed “the Führer’s qualities of greatness” in the years before the outbreak of war in 1939. Even after the war, when he was convicted as a collaborationist, Stein and her close companion Alice Toklas remained good friends with Fay and lobbied to free him from prison.

Like many of this century’s Jewish American intellectuals, Stein’s relationship to her own Jewishness was complex and conflicted. She was sensitive to anti-Jewish sentiment, and sometimes expressed criticism of Hitler. In 1936 she wrote: “There is too much fathering going on just now and there is no doubt about it fathers are depressing. Everybody now-a-days is a father, there is father Mussolini and father Hitler and father Roosevelt and father Stalin and father Trotzky …”

Estranged from the organized Jewish community, in part because of her eccentricity and lesbianism, she nevertheless retained an acute and proud sense of her Jewishness. According to Wagner-Martin, Stein once said, “all men of genius had Jewish blood,” and even developed a theory that Abraham Lincoln was part Jewish.

During the first decade of this century, Stein became enamored of Austrian-Jewish psychologist and philosopher Otto Weininger, whose major work, Geschlecht und Charakter (“Sex and Character”), had tremendous influence on European thinking. Following its first publication in 1903, the book was quickly translated into various languages, and went through 30 editions. Weininger contrasted the masculine “Being” of Aryanism and Christianity with the feminine “non-Being” of Judaism. Jesus was the only Jew to overcome Judaism, he argued. Zionism, in Weininger’s view, is the negation of Judaism, because it seeks to ennoble what cannot be ennobled. Whereas Judaism stands for the world dispersion of Jews, Zionism strives for their ingathering.

"When suspicion fills the air and holds scholars in line for fear of their jobs, there can be no exercise of the free intellect. Supineness and dogmatism take the place of inquiry. A 'party line' – as dangerous as the 'party line' of the Communists – lays hold. It is the 'party line' of the orthodox view, of the conventional thought, of the accepted approach. A problem can no longer be pursued to its edges. Fear strikes the classroom. The teacher is no longer a stimulant to adventurous thinking; she becomes instead a pipeline for safe and sound information. A deadening dogma takes the place of free inquiry. Instruction tends to become sterile; pursuit of knowledge is discouraged; discussion often leaves off where it should begin."
—US Supreme Court Justice William O. Douglas, Dissent, Adler v. Board of Education, 1952.

"In recent years, a number of people inside and outside of academe have begun … to assert their own claim that the agony endured by the Jews under the Nazis was – and remains – historically unique … In fact, this claim is a demonstrably false and dangerous myth.

"…Compared with Jews in the Holocaust, for example, some groups have suffered greater numerical loss of life from genocide. The victims of the Spanish slaughter of the indigenous people of Mesoamerica in the 16th century numbered in the tens of millions. Stalin's deliberate 'terror famine' of 1932-33 killed at least seven million Ukrainians.

"…Then there is the question of the speed of killing … Stalin's slaughter of the Ukrainians was much faster than the Nazis' killing of the Jews. And in 1994 the Hutus in Rwanda killed as many as 850,000 Tutsi people in less than three months. This rate of mass murder was far more rapid than the killing during the Holocaust as a whole.

"…The Holocaust historian Zygmunt Bauman has noted that Israel uses the Holocaust 'as the certificate of its political legitimacy, a safe-conduct pass for its past and future policies, and, above all, as the advance payment for the injustices it might itself commit.'

"…As one proponent of the uniqueness of the Holocaust, Edward Alexander, has put it, to describe as genocidal the ghastly agonies suffered by others – the Armenians, for instance – is to 'plunder the moral capital' of the Jewish people. It is to 'steal the Holocaust'."

"…In the public realm, Jewish suffering has attained what the religion scholar Richard L. Rubenstein calls 'religio-mythic' status."
—David E. Stannard, professor of American studies at the University of Hawaii at Manoa (Honolulu), in "The Dangers of Calling the Holocaust Unique," The Chronicle of Higher Education, August 2, 1996.

"There is still no insight into our spiritual poverty. From year to year there is ever more widespread expression of opinion that shows no thought. The methodology of this process has reached such a stage of perfection and has become so accepted that anyone, even the most ignorant, seems justified in confidently expressing his public opinion."
—Albert Schweitzer