Lord Greville Janner, 27-year former member of Britain’s House of Commons, is best known for having spearheaded the foundation of that country’s Holocaust Education Trust, which sees to the thorough—and thoroughly exterminationist—teaching of “Holocaust history” to all the children in all the schools in the British Isles. He also has been president of the Board of Deputies of British Jews, the ADL of the United Kingdom, and has otherwise led a public life full of distinction, honor, and powerful support for virtuous causes. 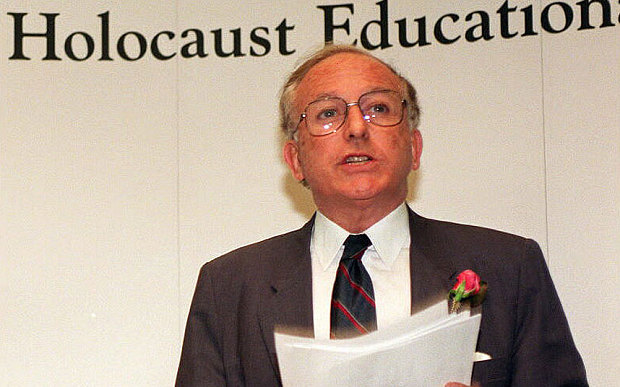 After a struggle of at least 24 years (since 1991) to suppress them, sordid details of his private life seem about to be made public (tinyurl.com/phnn42b) in a way most unflattering to the august image of Baron Janner of Braunstone, whose Jewish father immigrated to Britain in 1892 from what was part of the Russian Empire at the time. After a series of increasingly desperate and obvious cover-up efforts culminated in an excusal from prosecution based on the 87-year-old’s diagnosed Alzheimer’s disease and dementia, a review process initiated by some of his victims resulted in the unprecedented reversal of that excusal by a QC (Queen’s Counsel). The public presentation of evidence, and the lord’s defense against it, began August 7 at Westminster Magistrates’ Court. Preliminary reports of the complainants’ plans indicate that evidence for nine victims on 22 occasions will be presented. But the matter is dragging along at such a pace that the defendant may hope to end up being judged after he has gone on for his Final Judgment.

In view of the recent prosecution of Oskar Groening over on the other side of the Holocaust, and its outcome of a four-year jail term for the 94-year-old whose “crimes” were committed entirely in the line of duty, the “finding of facts” procedure faced by Britain’s most-eminent Jew is much more-benign: even if all allegations are found true, no Guilty verdict is pronounced, and sentences are limited to parole or involuntary hospitalization. And 87-year-old Lord Janner almost beat the rap entirely on the score of his age (and alleged mental condition).

If only to avoid becoming known as Lord Bugger, Lord Janner with the assistance of his co-religionists in powerful and sensitive positions throughout the British power structure covered up, papered over, denied and hid all implications as to the peer’s depredations upon defenseless children. This, even while he was erecting his odious Holocaust Education Trust, an institution whose business it is to foist precisely such tactics upon vulnerable young minds with lifelong effects, if anything, still more-deleterious upon them.

Today, Not-Honorable Lord Janner again calls upon his deceptive talents as he persuades actual panels of doctors (tinyurl.com/newp3kk) that he is now so irretrievably demented that he cannot be subjected to the indignity of being present at the adjudication of his guilt. Aside from easily feigned goofy behavior at a hearing in September, he has also arranged for photographs (tinyurl.com/oque8hz) to be published that clearly suggest his unfitness for the slightest level of cerebration. Could his be but the latest of the staged, altered, and misrepresented trove of photography used to prove the occurrence of events that really were not like that at all? Unfortunately, the general public has as yet not awakened to the tradition that the peer’s on-camera antics reprise in the present day.

Lord Janner’s talents for enjoyable deception transcend even those one might with confidence assume to be requisite for a successful barrister, member of Parliament, and life peer: it seems he is an accomplished magician to boot, and practiced his trade most generously at numerous orphanages in and around his Leicester constituency. It was in connection with one of those homes, whose manager, one Frank Beck, received five consecutive life sentences for sexual abuse of his charges, that allegations first arose of certain magic tricks the peer-to-be performed in his bedroom for specially selected audiences of one (at a time).

As for the more-public side of Lord Janner’s crimes—those for which he will, far from being charged with them, be praised and admired no matter the outcome of the present inquiry—he was too young by one or two years to serve in World War II, so he rode out the war quite safely in Canada. Once the Germans had been thoroughly beaten, however, he charged into Germany with the occupying British forces at the quintessentially military age of 18. There, he was part of the Jewish revenge squad launched from the United Kingdom to join similarly composed squads from the US, France, the Soviet Union, and likely other countries to assist the victors’ grinding their heels in the faces of the defeated Germans, a project whose continuation one may readily discern in the particulars of his career even after his triumphal return to his native land in 1948. He can claim thereby to have acquired his “knowledge” of the Holocaust firsthand at least as to place if not as to the critical element of time.

It will probably never occur to persons in a position to deal with the matter to try to mitigate the harm done by Lord Janner’s Holocaust Education Trust to truth and international comity. But at least, finally, it appears that the harm done by his other activities may come to light in a manner that could shed much-needed light upon the character of the man, and at least some of his deeds.

With the travesty that befell David Irving in the Queen’s courts in 2000, all those who cherish justice can do at this point is cross our fingers, and hope against hope.