High Court Lights Up a Glorious Fourth for Revisionists at Home

It was a pre-Fourth of July gift for Americans, and for Holocaust revisionism-hungry folks around the world. On June 26, the Supreme Court of the United States struck down President Bill Clinton’s and the Republican-controlled Congress’s Communications Decency Act (CDA). In its landmark decision, the nation’s highest court ruled that the law violated Americans’ First Amendment rights. (We at CODOH can’t help but contrast the favorable impact of this year’s court decision with last year's July 4 sneak-attack black-out of our Website by its server, thanks to the machinations of its district manager, Holocaust fanatic Rick Horowitz.) 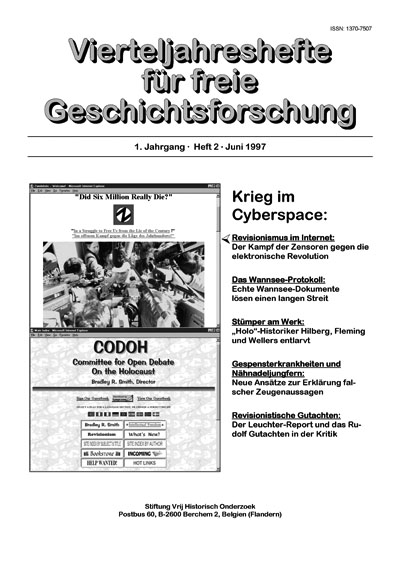 The leading German-language revisionist quarterly Vierteljahreshefte fuer freie Geschichtsforschung (Quarterly for Free Historical Research) used a reproduction of the home page of CODOHWeb, CODOH's site on the World Wide Web, as it appears on computer screens of revisionists around the world, to illustrate the cover of its second issue, themed “War in Cyberspace—Revisionism on the Internet: The Censor's War against the Electronic Revolution.”

No one has more reason to rejoice at the court’s decision than revisionists—not just here in America, but abroad, for in many of the countries most afflicted by the Holocaust dogma, there is at present no other practical, legal method of accessing information-hard, uncompromising scholarly fact—that challenges the state-sanctioned lies of the exterminationists than by the Internet.

There is little question that revisionism via the Internet is beginning to make inroads here and abroad. These inroads are difficult to quantify, other than in the increasing but not entirely satisfactory “hit counts” (records of site visits) being registered by CODOHWeb (see Richard Widmann’s “Internet Round-up,” in SR42 and the lead story, “Lipstadt Unleashed...” in SR43) and by such sister sites (linked to CODOHWeb) as Ernst Zuendel’s site (which CODOHWeb is “mirroring,” or copying, in the even that the legal proceedings currently underway against Ernst in Canada force him to close down his America-based site [http://www.webcom.com/ezuendel].

There are more indirect indicators of revisionism’s impact over the Internet, however. A recent survey of teenage middle-school students in Sweden, conducted by the University of Stockholm and the Crime Prevention Council (!), found that a good 30 percent of the youths questioned have doubts about whether the Holocaust is a historical fact (reported in the Hackensack, NJ Record, June 14, 1997).

Above is the first text you read when you click on the HomePage of CODOHWeb. Scrolling down the screen a few inches takes the viewer to the CODOHWebsite index pictured on page one of this issue of SR.

While this story, which included a predictable lamentation from Swedish prime minister Goeran Persson (“This is, naturally, an appalling warning sign”) as well as Persson’s equally predictable promise to beef up Holocaust indoctrination in the schools, made the wire services here in America, its revealing aftermath didn’t. On June 15, the day after the prime minister’s speech,

Sweden’s small but far from insignificant Holocaust lobby opened a media offensive against Radio Islam, ex-Moroccan army officer Ahmed Rami’s Islamist, anti-Zionist and Holocaust revisionist radio program, and against Rami's site on the Web: http://flashback.se/~rislam, also known as Radio Islam and linked, by one click of a computer mouse, to CODOHWeb.

Just one week after the prime minister’s official outrage over the findings of the opinion poll, Sweden’s attorney general initiated legal proceedings against Rami’s Website. Like it or not—and we don’t— we can’t help but note that Swedish officialdom (ably hectored along by such stalwarts as Jakob Ringart, head of The Association of Survivors of the Holocaust) went right to the source of what it considered the chief culprit in the growing disaffection of Swedish schoolkids with the Holocaust cult. (More than a few of these bright, intellectually independent young people—a high proportion of whom can read English—undoubtedly made their way—just one click, remember?—from Radio Islam's Web site to CODOHWeb with its vast array of revisionist scholarship, news, commentary etc.)

In Germany, the censors who operate the government know what’s at stake. On July 4, Germany’s leaders issued a declaration, not of independence, but of servitude, as the upper house of the German legislature passed the first law to control “cyberspace," to take effect on August 1. As with their long-standing efforts to control traditional print material, they've camouflaged themselves behind a concern with fighting “smut" directed at juveniles so they can disarm conservative sensibilities—while making their main concern revisionist and nationalist literature.

Besides Western Europe, the virus of suppressing revisionist ideas on the Internet has now spread to Australia, where Fredrick Toben's Adelaide Institute Website [http://www.adam.com.au/~fredadin/adins.html] has had a complaint brought against it before the so-called Human Rights and Equal Opportunity Commission by the Executive Council of Australian Jewry.