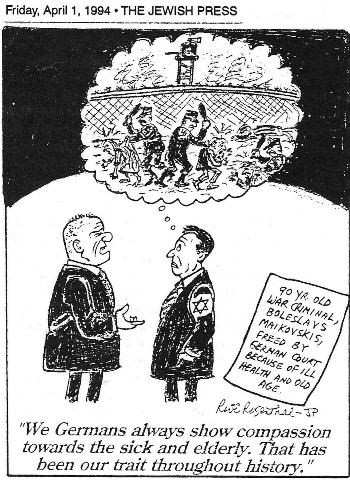 An important component of the seemingly perpetual Holocaust media campaign is the promotion of ugly and hateful images of Germans. A good example is the cartoon shown here. It appeared in the April 1, 1994, issue of the Jewish Press, an influential Brooklyn, New York, weekly with a claimed circulation of 160,000.

Such hate-mongering is not confined to papers such as the Jewish Week. Jewish writer Elie Wiesel, who has been honored by American presidents, wrote in one widely circulated work, Legends of Our Time: "Every Jew, somewhere in his being, should set apart a zone of hate – healthy, virile hate – for what the German personifies and for what persists in the German." Similarly, Steven Spielberg's widely acclaimed motion picture "Schindler's List" depicts Germans as brutal, corrupt, evil and mindless. The only exception is the main character, Oskar Schindler, who is portrayed positively only in so far as he helps Jews.

Even US government officials contribute to the bigotry. During the March 20, 1994, "60 Minutes" broadcast, Michael Berenbaum, an official of the US Holocaust Memorial Museum in Washington, DC, blamed "the Germans" for killing millions of European Jews during the Second World War.

So acceptable is such anti-German defamation in American newspapers, books, motion pictures and television that examples such as these rarely provoke even the slightest murmur of protest, even by groups such as the powerful Anti-Defamation League, which hypocritically claims to be concerned for the dignity of all.