Thoughts on Finkelstein, Goldhagen and Holocaust Revisionism
by Richard A. Widmann
Published: 1998-12-01 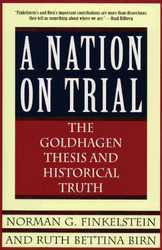 Having recently finished reading Nation on Trial, Norman Finkelstein's acclaimed critique of Daniel J. Goldhagen's Hitler's Willing Executioners, I was struck by his identification of an important distinction. Finkelstein draws a contrast between what he calls "holocaust scholarship," which he defines as historical and multicausal, and "Holocaust literature," which he defines as ahistorical and monocausal.

It is necessary to further consider Finkelstein's differentiation as it also explains much of the controversy surrounding the debate between revisionists and exterminationists. Exterminationists are fond of making the claim that "The Holocaust" is the most documented event in all history. A trip to the local bookstore would seemingly confirm or deny this claim. What one finds in both the small and large stores, and even in specialty gift shops like that at the United States Holocaust Memorial Museum is that the vast majority of titles are simply ahistorical Holocaust literature. Few books are available which would meet Finkelstein's definition of "holocaust scholarship."

Holocaust literature, according to Finkelstein, rose out of the 1967 Arab-Israeli war.(p. 92) He cites a work by Geoff Eley, entitled: Holocaust History which was reviewed in the London Review of Books, 3-16 March 1982. Eley reports, "By the late Sixties the term 'Holocaust' was appearing regularly in the titles of essays and books, freshly equipped with both a capital letter and the definite article." (pp. 92f.) Finkelstein asserts that "The Holocaust" is simply "the Zionist account of the Nazi holocaust." (p. 94)

Finkelstein classifies only a few titles as works of holocaust scholarship. These titles include, Raoul Hilberg's The Destruction of the European Jews, Hannah Arendt's Eichmann in Jerusalem, and Arno Mayer's Why did the Heaven's Not Darken? He comments that "virtually every seminal work seeking to recast the debate... has landed on the Holocaust literature index of forbidden texts." (p. 89)

It is unfair to limit the works of holocaust scholarship to those few mentioned by Finkelstein. I would have added Reitlinger's Final Solution, Van Pelt's Auschwitz 1270-Present and the works of Jean-Claude Pressac and Christopher Browning to the list.

If we were to develop a continuum we might wind up with Holocaust literature at the far left, holocaust scholarship in the center, and Holocaust revisionism at the right. Thinking in these terms, the dilemma of an honest study of the holocaust becomes readily apparent.

At the left are those who believe as Finkelstein puts it

Thus from an ideological or political standpoint, attacking "The Holocaust" amounts to attacking the state of Israel and the Jews in general. Falling into this category of ahistorical political accounts is of course Elie Wiesel who has written that he who "refuses to believe me" is "lending credence to those who deny the Holocaust." (p. 91n)

At the center of this continuum are the works of holocaust scholarship. These "scholars" however appear to be torn and unable to generally deal with their topic objectively either. Each new work of holocaust scholarship in some way addresses the topic of Holocaust revisionism. Still, these "scholars" also have to keep in mind the ideologues who are quick to condemn any who cast doubt on their quasi-religious version of the Holocaust.

These "scholars" unfortunately seem to feel the need to straddle the mid-ground between the two opposing camps. This has led to many mini-revisionist victories since ground is constantly being given up to the revisionists but while specifics are sacrificed, the general story remains the same, as a sort of tribute to the ideologues who are quick to use fear and intimidation if their version is not given credit.

Thus in recent times we have seen Raoul Hilberg revise his magnum opus by removing his comments about Hitler's orders to carry out the "Final Solution" which appeared in his earlier edition. Arno Mayer was to go much further. Mayer was to seriously address the arguments of the revisionists. One can even find a reference to Arthur Butz's The Hoax of the Twentieth Century in the bibliography. Mayer's comments like "more Jews were killed by so-called 'natural' causes than by 'unnatural' ones" led to the book's condemnation and ultimately its early demise.(Mayer, p.365) It was allowed to go out of print while other lesser works of Holocaust literature get reprinted over and over again.

Jean-Claude Pressac would follow Mayer in addressing the revisionists. Pressac interestingly is not even mentioned by Finkelstein. His work although considered "definitive" were kept from the general public. Pressac's work is largely only available in edited form as part of the anthology, Anatomy of the Auschwitz Death Camp. Pressac would admit shockingly that at Auschwitz "more than 95 percent [of Zyklon B ordered was used] for delousing." (Gutman, Berenbaum ed. p. 215) In other words, 95 percent of the killing agent was used to keep inmates alive while only 5 percent was used to kill them.

Even more recently, Robert Jan-Van Pelt published his Auschwitz 1270 to the Present. This work not only uses a well-known (in revisionist circles) diagram of a Zyklon B delousing chamber (complete with Fritz Berg's hand drawn arrows!) but admits that the "gas chamber" at Auschwitz I is "largely a postwar reconstruction." Auschwitz is called a "commemorative camp" and Van Pelt admits

"there are no signs to explain these restitutions, they were not marked at the time, and the guides remain silent about it when they take visitors through this building that is presumed by the tourist to be the place where 'it happened.'" (Dwork/Van Pelt, p. 364)

The next important venture into the dealing with the revisionists was Goldhagen's Hitler's Willing Executioners. According to Finkelstein, "Goldhagen's book marks the first foray of a Holocaust ideologue across the divide into the holocaust field... What Hitler's Willing Executioners points to is the intellectual barrenness of Holocaust literature: ignoring as they do the findings of holocaust scholarship, the claims of Holocaust ideologues prove unsustainable when put to an empirical test." (p. 91)

Thus, Goldhagen attempted to deal with the revisionists by giving up no ground whatsoever. Actually Goldhagen ran full speed into the camp of the ideologues. His book was thusly given wonderful reviews from around the globe for it presented itself as "scholarship" but merely amplified the ahistorical accounts of the ideologues.

Goldhagen has been thoroughly trounced in A Nation on Trial. Finkelstein declares, "Goldhagen's book is worthless as scholarship." (p.4). But where does this leave us? The fault of Goldhagen's volume is his acceptance of the Holocaust story of the ideologues. But this fault also runs throughout the works of holocaust scholarship that Finkelstein otherwise champions. As these "seminal" works debunk some element of the Holocaust literature their authors clearly understand the difficulty of challenging the whole. Therefore their attempts debunk only small pieces of the Holocaust. For these efforts the authors of such works receive few accolades and much criticism.

Revisionist historians continue to raise pointed questions about the holocaust. The ideologues, including Goldhagen refuse to give even an inch, making their position absurd and irreconcilable with the truth. The holocaust "scholars" meanwhile attempt to straddle the fence between truth and falsity - an untenable position.

Without attempting to do so, Finkelstein has shown both the bankruptcy of Goldhagen's book and the shortfalls of Holocaust literature and holocaust scholarship as well. Until historians can present the events of the holocaust without fear and intimidation, until the topic can be freed from its political ramifications, truth will remain the lone territory of the revisionists.