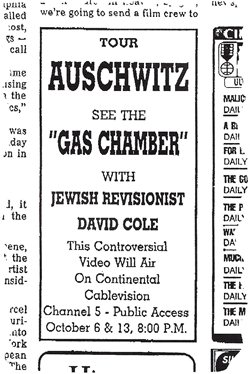 In northern California, veteran IHR supporter Harvey Taylor recently arranged for the broadcast of David Cole’s compelling video about Auschwitz on local cable access television, Continental Cablevision of Yuba City. To inform the public of the showing, Taylor also published an announcement (reproduced here) in the local daily Marysville Appeal-Democrat. Beginning October 5, it appeared in the paper for seven consecutive days. As a result of the broadcast, anonymous persons made telephone death threats against Fred Kirchubel, video production supervisor of Continental Cablevision (Sierra region), as well as other members of the station staff.

"An invasion of armies can be resisted, but not an idea whose time has come."
—Victor Hugo