Indelible Shadows: Film and the Holocaust

Indelible Shadows is a rather idiosyncratic study of films, dramatic and documentary, that cluster around the Holocaust, narrowly defined by author Annette Insdorf as the "genocide of European Jewry." If the author is to be believed, the book, first published in 1983, is an attempt to evaluate Holocaust films above all from an ethical basis that prizes truth and earnestness and dismisses sensationalism and error. In this aim, Indelible Shadows fails rather badly; the interesting question is why.

One reason the book falls short is the author’s puzzling eclecticism in her designation of Holocaust films. Perhaps the 1940 Great Dictator’s inclusion of concentration camps and the slapstick resistance of ghetto denizens justifies the six pages of text and stills devoted to it, but how to justify lengthy treatments of Cabaret (1972) or Ingmar Bergmann’s The Serpent’s Egg (1977), each set in the Weimar republic? Possibly the author subscribes to a particularly fervent belief in "intentionalism," the academic notion that the Holocaust was being planned years, if not decades, before it is alleged to have begun; just as likely is both films’ service as anti-Nazi and anti-German propaganda.

For all her moral earnestness, Insdorf, a professor of film studies at Columbia, is noticeably erratic in her sense of propriety. True, Mel Brooks’s The Producers (1968) didn’t quite make the cut—but The Boys from Brazil (1978), a fantasy in which Dr. Mengele (forgettably portrayed by Gregory Peck) unleashes several dozen Hitler clones on the world before being foiled by Simon Wiesenthal-figure Ezra Liebermann (played by a slightly miscast Lawrence Olivier), receives respectful consideration ("an entertaining thriller that raises some important questions of Nazi continuity," p. 10). Why, then, the omission of The Odessa File (1974) (more of Wiesenthal’s Munchausenesque derring-do), or, for that matter, They Saved Hitler’s Brain (1963) ("a disturbing science-fiction evocation of the perversion of biology and medicine in the Third Reich," she might call it)? In any case, Professor Insdorf’s opinion that "…for anyone who saw Marathon Man, in which Laurence Olivier portrayed a Nazi dentist on the rampage in New York City, his fine performance here as Liebermann suggests too great a versatility" (p.11) will doubtless convince most readers of The Revisionist that too strenuous an attempt to divine her critical standards and method would be time wasted. 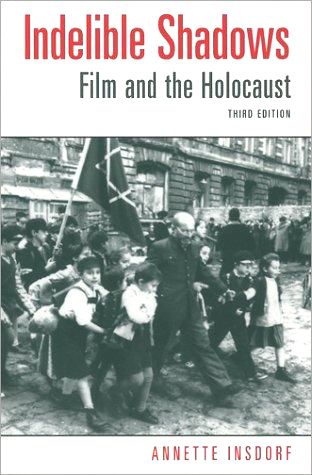 In her evaluation of films that attempt to depict aspects of the Holocaust, Insdorf is generally hard on Hollywood, faulting it for everything from Holo-kitsch to excessive blood and gore to oversensitivity about gentile concerns. While it is amusing to learn that objections from the American Gas Association resulted in the deletion of the word "gas" from a televised version of Judgment at Nuremberg on Playhouse 90 in 1959 (p. 3), revisionist readers will be bemused to find out that it is the "Hollywood conventions of casting and scoring" that undermine the authenticity of The Diary of Anne Frank (1959) (p.7). Evidently the author is not troubled by the discrepancies between the various texts of the diary and its divergences from discernible reality unearthed by Robert Faurisson (condemned in the author’s 1983 introduction), or even by the re-jiggering, as remarked by author Ira Levin, of the diary’s content to cater to the concerns of gentile theater and filmgoers.

Ranging through scores of films and hundreds of pages to pluck out such anomalies for examination is easy: Why isn’t the casting of Robert Mitchum in War and Remembrance (1989) (pp. 23) faulted in light of Mitchum’s revisionist and anti-Semitic comments (he wanted to visit Israel wearing an "I Like Ike [i.e., Eich]" button) at the time? How on earth does the story of an anti-Semitic Polish priest who died at Auschwitz (Life for Life—Maximilian Kolbe [1991]) qualify as a film about the genocide of the Jews? What, exactly, does ex-SS man Dirk Bogarde’s slathering his former concentration camp charge and sado-masochistic lover Charlotte Rampling with jam during a hearty coupling in a hotel in 1957 Vienna (in the Night Porter [1974], respectfully treated here [pp. 130-2]) have to do with the Holocaust? Yet, since Indelible Shadows carries a foreword by the incomparable Elie Wiesel, to ask over many such questions would be cruel: it would mean watching the Holocaust cult’s thin-skinned St. Sebastian, as well as Ms. Insdorf, transformed first to pin-cushions, then to hedgehogs, by a hundred and one piercing barbs.

When it comes to authenticity, coupled with morality, in depicting the supposed genocide, author Insdorf places Alain Resnais’s 1954 Night and Fog, Claude Lanzmann’s 1985 Shoah, and Steven Spielberg’s 1993 Schindler’s List in the first rank of Holocaust films. She is evidently untroubled by Night and Fog’s claim that nine million people died at Auschwitz, and approves of its accusations, supported by lurid images, that corpses there were manufactured or crafted into soap, fertilizer, lampshades, handbags, and the like (p. 37). The talking heads and chugging choo-choos of Shoah are proof enough for Insdorf of the gassing of up to three million Jews—but then, she is gullible enough to believe a claim, by one of Lanzmann’s interviewees, that while operating a locomotive which periodically took trainloads of Jews to Treblinka he was allowed by the Germans to assuage his massive guilt by freely guzzling vodka. As for Schindler’s List (passing over the film’s numerous deviations from historical fact and its refusal to moralize over its protagonist’s having been a war criminal, by Nuremberg standards, in half a dozen different ways), the author seems unperturbed that the film’s focus on individual sadism and its visual de-emphasis represents a reversion to the tabloid representations of the immediate postwar—plus cringing, subservient Jews and their Nazi savior, to boot.

Annette Insdorf makes much of searching for Holocaust films that are morally righteous as well as marketable. Her book more than hints, however, at a greater interest in movies that promote the Holocaust cult with a strong bias and a feeble regard for historical truth, to the largest possible audience.