The journalist is forced to acknowledge that the story of chancellor Hitler's refusal to shake Jesse Owens' hand is but a legend. Yet as recently as 1991, Le Monde perpetuated that legend under the by-line of Claude Sarraute, who had dared to write:[1]

"Hitler indeed refused to shake the hand of Jesse Owens, the black American champion at the Berlin Olympics in 1936."

The protocol of the time had not provided for the athletes' presentation to the chancellor, and Jesse Owens himself, afterwards, denied ever having been in Hitler's presence. What S. Cypel could have pointed out is that, after noticing the defeat of Ludwig ("Lutz" or "Luz") Long in the long jump, Hitler made first, like many other Germans, "a sign of disappointment, then applauded the black American's performance."[2]

The same S. Cypel fails to add that the name of Jesse Owens was engraved four times on the tower of honor on the Olympic grounds. A photograph has immortalized the image of the German sculptor inscribing the illustrious name for the second time at the very top of the monument.

Once back in the United States, the athlete was to experience anew, on public transport as elsewhere, the daily humiliations inflicted on blacks in his country, and he would not fail to compare it with the treatment that he had received in Germany. In 1984, four years after Jesse Owens' death, his widow recalled that he had never made any complaints about Hitler's Germany. And why should he have? When he walked off the field side by side with his German friend and rival, the two athletes received an ovation. In the two-volume photographic album devoted to the Games, Hitler is shown six times, J. Owens seven times, and the black athletes in general twelve times. The chapter covering foot racing opens with, "The fastest man in the world: Jesse Owens-USA". The opening page of the first volume displays a photograph of Adolf Hitler amidst a group of German officials, and that of volume two, a portrait of Theodor Lewald, a Jew and president of the German Olympic organizing committee.[3]

The Jewish Athletes at the Olympics

S. Cypel writes that "the German-Jewish athletes [were] prevented from participating" in the Games. One may remind him that, as I have just mentioned, the president of the German Olympic organizing committee was the German Jew Theodor Lewald and that the German Jewess Helene Mayer won the silver medal in fencing. Also, the German Jew or half-Jew, Rudi Ball, had been a member of his country's bronze medalist ice-hockey team at the Winter Games of 1932,and he again played on that team in the 1936 Games held at Garmisch-Partenkirchen. It is true that at the last moment the German star high-jumper, Gretel Bergman, was cut from the team, but that could not have been for her Jewishness, as proved by the examples of the two other athletes. Hitler had expressly stated before the Games that Jewish athletes must not be excluded from the German team.[4] On the subject of German-Jewish athletes' participation in those Olympics, one noteworthy reaction was that of Victor Klemperer, cousin of the orchestral conductor Otto Klemperer. The son of a rabbi and husband of an Aryan, he spent the entire National-Socialist period, including the war years in Dresden, which he had to leave after the terrible Allied bombings of February 1945. In his private diary, under the date of August 13, 1936, he noted:[5]

"I find the Olympic Games, which will soon be over, doubly repulsive. As an absurd over-estimation of sport; the honor of a people depends on whether one of its members jumps ten centimeters higher than the others. And besides, it's a nigger from the United States who has jumped the highest, and the silver medal in fencing for Germany has been taken by the Jewess Helene M[a]yer (I don't know what is more indecent, her participation as a German of the 3rd Reich or the fact that her performance should be claimed as a victory for the 3rd Reich.)" 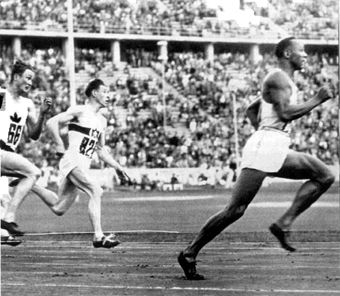 Jesse Owens 1936 in Berlin on his way to one of his gold medals.

It must be said that Victor Klemperer was fiercely anti-Zionist. For him, Zionism was "pure Nazism" and "repugnant."[6]

Entente between National Socialists and Zionists

A good number of Zionist Jews held an ideology similar to that of the National Socialists. Efforts are made today to keep this point under wraps, at the risk of thwarting completely the comprehension of a whole series of historical facts among which may be cited:

The Rise of German Zionism in 1936

In February 1936, some months before the opening of the Olympic Games, the German Zionists officially held their congress in Berlin. As early as that year, Germany already hosted about forty Zionist training centers (Umschulungslager) for the instruction of young Jews in farming or other skills that they would need to use later in Palestine. The Jewish press in Germany at that time experienced a prodigious expansion. There was talk of a reawakening or revival of Jewish consciousness. Assuredly, the anti-Zionist Jews deplored or condemned this state of things. Many Jews, particularly those of the older generation, proudly laid claim to a certain Germanness: amongst them, the project held by young Jews to be a solution for the future was seen as a disaster in the making. The Germans authorized the setting up of uniformed Jewish paramilitary groups under a blue and white flag (the flag of the future state of Israel) albeit on the condition that they not parade in the streets, but only within their school grounds or barracks. Sometimes there were sporting events between young Zionists and young National Socialists. For more information on these aspects, one may read either the book by Francis Nicosia, The Third Reich and the Palestine Question,[7] Otto Dov Kulka's noteworthy study "The reactions of German Jewry to the National-Socialist Regime,"[8] or the book by French author Emmanuel Ratier, Les Guerriers d'Israël.[9] One may also consult either the Encyclopaedia Judaica or the Encyclopedia of the Holocaust; I recommend this latter book's entry "Lohamei Herut Israel" on the subject of the proposal by the Lehi (to which Yitzak Shamir belonged) of a military alliance between Jews and Germans against Great Britain.

The Case of Marty Glickman

Keen to detect the least hint of anti-Semitism so as to find fault, wail, and make new demands, S. Cypel is not afraid of attacking the heads of the 1936 American delegation. He states that this delegation included only two Jewish athletes, Marty Glickman and Sam Stoller. At the last minute, these two relay racers were replaced by two blacks, Ralph Metcalfe and Jesse Owens. The sole explanation according to Le Monde: Glickman and Stoller were dropped because they were Jews! That argument is inadmissible since in the end the choice proved to be most fortunate, and the blacks took a gold medal. In any case, if certain persons are to be believed, in the 1980s M. Glickman, then best known in America as a radio commentator for the New York "Giants" football club, stated that he had an "enthusiastic" memory of those games.[10]

The Case of Horst Wessel

"The Horst Wessel Lied, that song of the SA in honor of an anti-Semitic hooligan, bellowed after the Olympic anthem."

A Jewish and Communist rumor has it that Horst Wessel met his death either in a street battle with the Communists or in a public fight with a pimp. The truth of the matter appears to be that this pastor's son – a militant anti-Communist active in the SA, law student, and, in his free time, poet – was shot in the face by a Communist at his home and died in a Berlin hospital on February 23, 1930. In September 1929, he had published a poem to the glory of the SA, and it is that poem, set to music after his death, which became the second German national anthem.

It is somewhat difficult these days to keep pace with Le Monde in its production of errors or lies relating to the 3rd Reich or the Shoah. I have made it my duty to send to both its managing editor, Jean-Marie Colombani, and to the authors of grossly mistaken or mendacious articles, my humble inventories, invariably set forth under the heading: "Le Monde, journal oblique (suite)". I am aware of the fact that this newspaper, which is badly in need of money and fears the wrath of the Jews, repeatedly tries to atone for its cardinal sin: it printed, in the issues of December 29, 1978, and January 16, 1979, my iconoclastic observations on the physical and chemical impossibilities of the Nazi gas chambers. That act remains etched in the minds of those who profess never to forget and never to forgive. So be it! But there ought to be limits to servility.

Jean-Christophe Mitterrand has seen in Le Monde the "echo chamber" of "a certain Jewish lobby."[11] That lobby bursts our eardrums with its lying propaganda, its "Holocaust" industry's inventions, and the fabrications of its Shoah-Business. It is time that Le Monde ceased being its "echo chamber".

For my part, I await the review that this newspaper will undoubtedly write of a work which is among the most horrid that the holocaust propaganda outfits have ever produced. It is the book chosen by French Education minister Jack Lang for the mandatory teaching of the Shoah to the children of France beginning in the third year of secondary school. Concocted by Stéphane Bruchfeld and Paul Levine, it is to be published by Ramsay under the title: Dites-le à vos enfants (Tell it your children).

I shall, upon its release, give an account both of this book and of its review by Le Monde.

NB: In its issue of September 29, 2000, Le Monde was to publish, under the by-line of Philippe-Jean Catinchi, a brief review of a book by Jean-Michel Blaizeau, Les Jeux défigurés de Berlin (The Disfigured Berlin Games). A passage in this account reads that what has been retained of the 1936 Olympics is "the fury of Hitler refusing to shake the hand of Jesse Owens." Nothing in the piece indicates that this is the stuff of myth.