Much ‘Holocaust’ But No History: The Failure of Rabbi Berenbaum

Michael Berenbaum, co-editor of this collection of essays, is a theologian and a rabbi. His personal drama arises from having wished, for several years, to pose as a historian, and from finding himself now, with the publication of this book, to be the plain and simple theologian and rabbi who, in reality, he has never ceased to be. Until rather recently (1993-early 1994) he had tried to reply to the revisionists on their own terms, that is, on the basis of material, technical and scholarly arguments: in short, on the level of historical research.

But in this 1998 work there is no more of all that: here we are back to the “Holocaust” dogma, amid statements made without substantiating evidence in a quasi-immaterial world. No longer is anything “disputed” or “reexamined,” except certain near-theological points, like the question of whether the “intentionalists” or the “functionalists” are right in their interpretations of the Germans’ “genocide” of the Jews. This work offers not one photograph, model, drawing or document. Only on the dust jacket does there appear a photograph, that of a heap of shoes. Already in 1993 this image could viewed at the Washington Holocaust Museum, with the caption: “We are the shoes, we are the last witnesses.” 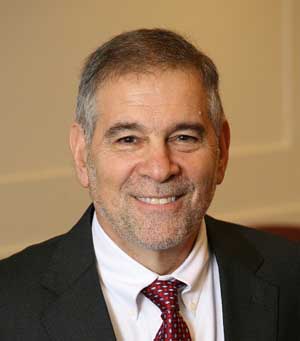 Berenbaum Gives Up on History

In the 1980s and early '90s, several advocates of the “Holocaust” argument tried to adopt an approach based on scholarly and historical reasoning, if only to counter the revisionists. This was the stance of Pierre Vidal-Naquet, Georges Wellers, Adalbert Rückerl, Hermann Langbein, Eugen Kogon, and Serge Klarsfeld (with the aid of the pharmacist Jean-Claude Pressac). Even Michael Berenbaum engaged in this pursuit, first in his 1993 Museum guidebook, The World Must Know: The History of the Holocaust as Told in the United States Holocaust Memorial Museum, and then in a 1994 book he co-edited (with Yisrael Gutman), containing essays of 25 contributors: Anatomy of the Auschwitz Death Camp, published by Indiana University Press in association with the US Holocaust Memorial Museum.

But, in August 1994, an event was to disrupt Berenbaum’s life. He allowed me to visit him in his office at the US Holocaust Memorial Museum, in the presence of two other high-level Museum officials. Having taken note of his arrogant attitude, I decided to spare him nothing and, before his two colleagues, I spelled out for him, one by one, certain facts that showed the Museum and his book to be devoid of any scholarly or demonstrative value. In response he became quite angry, and ended up telling me that if the Museum exhibited no real material representation of a gas chamber (the door on display therein being that of a delousing gas chamber, and the model a mere whimsical mock-up), it was because “the decision has been made not to give any physical representation of the gas chambers.”

That interview probably contributed to his more recent decision to abandon the scholarly and historical terrain to the revisionists. It is also likely that the 1995–96 writings of anti-revisionist authors convinced him that the case for the “Holocaust,” with its purported genocide and gas chambers, had become completely indefensible on the scholarly and historical level. 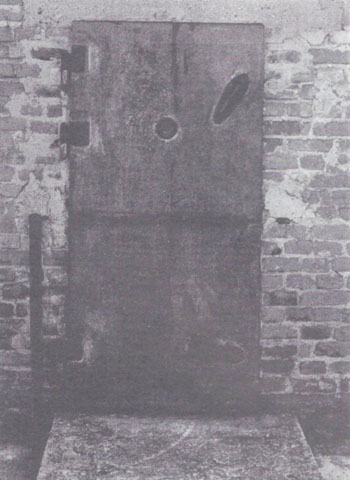 A casting of this "gas chamber" door from the Majdanek camp in Poland has been on display at the US Holocaust Memorial Museum in Washington, DC. In his 1993 book, "The World Must Know" (p. 138), Museum official Michael Berenbaum describes this "casting of the door to the gas chamber at Majdanek... from the outside, SS guards could observe the killing through a small peephole." In fact, as French anti-revisionist researcher Jean-Claude Pressac has acknowledged, this was a door of a non-homicidal delousing chamber used to disinfect clothing. For more on this, see "Gas Chamber Door Fraudulently Portrayed at US Holocaust Museum," in the Sept.-Oct. 1993 "Journal," p. 39.

The coup de grâce was delivered by French historian Jacques Baynac who, in spite of his intense hostility to revisionism, came to recognize that there was no evidence at all with which to establish the existence of wartime homicidal gas chambers. (Le Nouveau Quotidien [Lausanne, Switzerland], issues of September 2 and 3, 1996. See: “An Orthodox Historian Finally Acknowledges: There is no Evidence for Nazi Gas Chambers,” July–August 1998 Journal, pp. 24–28.)

The Victory of Elie Wiesel and Claude Lanzmann

Concerning the “Holocaust” or “Shoah,” Elie Wiesel and Claude Lanzmann (giving credit where it is due) have always avoided the scholarly historical method as they would the plague. In his memoir the former has written “Let the gas chambers remain closed to prying eyes, and to imagination” (All Rivers Run to the Sea, New York: Hill and Wang, 1994, p. 74), while Lanzmann has stated that, if he had been able to find suitable archival photographs for his film “Shoah,” he would have “destroyed them” (David Szerman, “Shoah,” Le Chroniqueur [a French Jewish community periodical], June 30, 1993, p. 38).

For his part, historian Daniel Jonah Goldhagen has, in a way, followed their recommendations. His much-discussed 1996 work, Hitler’s Willing Executioners, is a kind of moral or philosophical dissertation in which the author deliberately neglects the precept that every historian should strive to uphold: to establish the material facts before making any commentary.

The Rabbi’s Wrath, And His Warning

For this latest book Michael Berenbaum has enrolled 54 authors under his banner. The great majority of them are Jewish, and all, including Raul Hilberg, respect the religious dogma of the “Holocaust” to the letter. I consider Hilberg to be gifted, as Arthur Butz has put it, with “a remarkable cabalistic mentality” (The Hoax of the Twentieth Century [IHR, 1976/1997], p. 7). Berenbaum has even rallied to his camp Israeli historian Yehuda Bauer, who at times has suffered from lapses of independence. In 1992, for example, Bauer suddenly rejected the importance of the Wannsee conference, declaring: “It was a meeting, but hardly a conference … little of what was said there was executed in detail.” He continued: “The public still repeats, time after time, the silly story that at Wannsee the extermination of the Jews was arrived at. Wannsee was but a stage in the unfolding of the process of mass murder.” (“Wannsee’s importance rejected,” The Canadian Jewish News, Jan. 30, 1992). 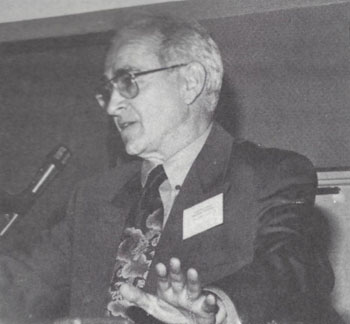 But in this new book, which contains a contribution by Bauer, that gathering is referred to (p. 155) as “the eventful Wannsee Conference.”

In his contribution to this work, Bauer goes so far as to anathematize Arno Mayer, a professor at Princeton University who, in a book published in 1988, made no secret of his wish to put the “Holocaust” back into the sphere of History. Entitled Why Did the Heavens not Darken? (New York: Pantheon), it bore the subtitle The “Final Solution” in History, which, in the author’s mind, meant “in History and not in legend or mere belief.” In that book – and this point deserves stressing – Prof. Mayer committed a grave sin against the dogma, particularly in his treatment of the “gas chambers,” of Auschwitz, and of the Einsatzgruppen. In The Holocaust and History (p. 15) Bauer dismisses Mayer in a few words, castigating his popularization of “nonsense,” his “cocksure” book, and of engaging in a “subtle form of Holocaust denial.” Bauer even states that Mayer “flies in the face of well-known documentation.”

Also in this anthology, Polish historian Franciszek Piper issues a warning to anyone who might be tempted to engage in an endeavor that, not so long ago, he himself engaged in: that of rationally analyzing the facts and techniques relating to the alleged extermination of the Jews. Thus one may read (p. 384) these words from the pen of Poland’s specialist of the Auschwitz camp: “The work ahead requires sensitive attention to the tragedy of the victims and forbids reduction of genocide to a technological process.” His master’s voice (that of Rabbi Berenbaum) can be heard here.

In choosing The Holocaust and History as the title for his new book, editor Berenbaum naturally intended the reader to understand that the “Holocaust” was a historical event. It so happens, though, that the title he selected is, from his own point of view, rather unfortunate because of its unintentionally revealing quality. In effect, the word “and” by itself shows, without his having intended it, that the “Holocaust” is one thing, and History another thing altogether. The “Holocaust” is a fiction, a dogma, a religion. History is, or at least should be, a matter of facts, reason, and science.

This patchwork of texts by 55 writers (Hilberg’s contribution dates from 1993) is merely an assortment of essays containing much “Holocaust” but no History. With regard to the aforementioned Anatomy of the Auschwitz Death Camp, a work co-edited by Berenbaum and published in 1994 that consists of 25 contributions, I have had occasion to say that this is rather a “Cacophony on the Auschwitz ‘Death Camp’.” With regard to this new work, published four years later and consisting of 55 contributions, I shall certainly not speak of cacophony. This ensemble’s members are in unison; all are playing the same score. We are in a synagogue; chorus and orchestra obey, closely and strictly following Rabbi Berenbaum’s baton. It is everything that one could expect in such a setting: a religious assembly, a ceremony, the celebration of a service. But it is definitely not a seminar of historians, nor a historical work.

"Today democracy is a facade of plutocracy. Because the peoples will not tolerate naked plutocracy, power is nominally turned over to them, while real power rests in the hands of the plutocrats. In democracies, whether republican or monarchical, the statesmen are marionettes, and the capitalists are the wire pullers: they dictate the political guidelines, they control the voters by buying public opinion, through business and social connections [they control] higher government officials … The plutocracy of today is more powerful than the aristocracy of the past, because nothing stands above it except the state, which is its tool and helper."
—Count Richard von Coudenhove-Kalergi, "Pan-european" publicist and political figure, in his book Praktischer Idealismus ("Practical Idealism"), Vienna, 1925.