On October 22, 1992, a criminal court in Schweinfurt found Remer guilty of popular incitement and incitement to racial hatred because of allegedly anti-Jewish statements published in five issues of his widely circulated tabloid paper, Remer Depesche.

Comparing the defendant to Mephisto in Goethes Faust, the state prosecuting attorney contended that the purpose of the Remer Depesche is to promote Nazi ideology. The prosecutor also spoke of Remers crude insult against millions of victims, and insisted that the Holocaust extermination story is an obvious historical fact that does not need to be proved in court.

The judges apparently agreed. The incorrigible defendants previous convictions on this same charge should have been a warning to him, the court declared. Adding to his guilt, the judges said, is the fact that copies of his paper were distributed to many households and schools, and even in foreign countries. (Because of his outspokenness, the Bonn government had already taken away the defendants pension.)

The tall, slim octogenarian defendant let his two attorneys – Dr. Herbert Schaller and Hajo Herrmann – speak for him during the course of the two-day trial. During the Second World War, Dr. Schaller served as a highly decorated officer on the eastern front. Herrmann was one of Germanys most successful wartime fighter pilots and air force commanders.

Remers publications are not hateful or anti-Jewish, argued the defense attorneys, but are instead meant to defend the German people against the charge of collective responsibility for mass murder of Jews. In fact, they pointed out, the Remer Depesche is published by the J. G. Burg Society, named after a Jewish survivor of wartime persecution who testified on behalf of Ernst Zündel in the 1988 Toronto Holocaust trial.

The Holocaust extermination story is not at all obvious, the attorneys said, and cited public opinion polls in several countries to show that an international debate exists on precisely this issue. The postwar confession of Auschwitz commandant Rudolf Höss, which is widely cited as proof of mass gassings, is worthless, said the attorneys, because it was obtained by torture. They also cited the existence of brothels, concerts and medical treatment for inmates in the wartime concentration camps. 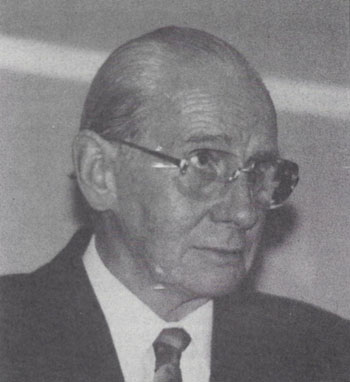 Remer at the Eighth IHR Conference, 1987.

To show that the allegedly criminal statements made in the Remer Depesche are justifiable, the defense attorneys prepared 34 exhibits, including a report by German engineer Germar Rudolf on his on-site forensic examination of the alleged extermination gas chambers at Auschwitz, Allied aerial reconnaissance photographs taken in 1944 of the camp complex, as well as several witnesses. The judges refused to consider any of this evidence.

Remers attorneys vehemently criticized the courts refusal to consider their evidence, pointing out that the court is legally obliged to consider any evidence that might exonerate a defendant.

In a democratic state, they added, the government must be neutral about historical issues, and should permit a free exchange of competing views. It is outrageous that state officials not only make no effort to disprove what their defendant has said, but merely insist that he has no right to express his dissident views on this issue. That the German government still refuses to give any serious consideration to the abundant evidence that there was no mass extermination of Jews, but instead simply says that this is an obvious fact, is, in a democracy, outrageous, said the attorneys.

Remer has never given up the struggle, as he sees it, for the good of his people. His supporters called this trial the retired commanders last great battle for Germany.

The courtroom was entirely packed during the proceedings, and many who wanted to attend had to be turned away for lack of seating. Most of those who attended firmly supported Remer. During breaks in the proceedings, they made comments to him such as: I congratulate you on your courage, and Mr. Remer, I wish you all the best as a decent German.

Pointing out that Remers crime was a non-violent expression of opinion, the defense attorneys characterized the proceeding as a special kind of political trial. Remer himself described the court as a regime tribunal, and expressed the hope that perhaps the day will come when this court will be called to account for its behavior.

A prison sentence of 22 months, without suspension, is normally handed down in Germany only against major felons, such as arsonists and drug dealers. For an 80-year-old man like Remer, a 22-month prison sentence can easily be a life sentence.

The October verdict is being appealed, but the outlook for success is not good.

Remer, who addressed the Eighth IHR Conference in 1987, is himself a historical figure. As a young officer in command of the Berlin guard regiment in July 1944, he played a key role in suppressing the ill-fated attempt by conspirators to kill Hitler and seize power in a violent coup détat.

Remer was promoted, eventually to general, and at the end of the war was serving as a commander in Pomerania. Among other decorations, he was awarded the Knights Cross with Oak Leaves, the Golden Wounded Badge, the German Cross in Gold, and the Silver Close Combat badge for 48 close combat engagements.

After the war, the American commander of a camp for German prisoners of war, First Infantry Division officer Stanley Samuelson, said of him: Of the 87 German generals in this camp, General Remer is the only one whom I respect as courageous and honorable.

[Remers presentation at the Eighth IHR conference is available on both audiotape and videotape from the IHR; [check www.ihr.org for current availability and price; ed.]]