Peter Sagal's play Denial, being performed during April and May 1998 in Highland Park, Illinois, centers on Bernard Cooper, an engineering professor (not electrical) who has written a Holocaust revisionist book.

The Chicago Tribune (23 April 1998, sec. 5, p. 4), in a review of the play said it is "based in part on Holocaust skeptic Arthur Butz". The Chicago Jewish Star (24 April – 7 May 1998, p. 12) declared that Cooper is "an Arthur Butz clone." Since there will be those who will think it is actually about me, I want to clarify this relationship as I see it. Thus this is not a review in the normal sense. For example, those who don't want to learn the surprise climax from me should stop reading now.

The feds, represented by prosecutor Adam Ryberg, who wears a yarmulke (Jewish beanie) throughout, want to charge Cooper with incitement to violence based on the fact that there are several known cases of people who committed acts of violence who had possessed copies of Cooper's book. Ryberg has confiscated Cooper's files and also claims he has the testimony of a secret, unidentified informant.

The American Civil Liberties Union asks Jewish lawyer Abigail Gersten to defend Cooper, and she reluctantly agrees, though she subsequently misses no opportunity to express her hostility to Cooper.

Ryberg, Cooper and Gersten meet in the last's office, and they are joined by Noah Gomrowitz, an Elie Wiesel type who has written a book detailing how his friend Nathan traded identities with him at Auschwitz and was subsequently gassed.

In this meeting Cooper questions Gomrowitz with some effect. He shows that Gomrowitz could not have actually known that Nathan was gassed because he did not witness it. He also nails Gomrowitz on claiming an air raid at Auschwitz months before the first actually took place. Although the play gets the dates garbled, this is clearly lifted from my book The Hoax of the Twentieth Century (pp. 150ff). Indeed much, though not all, of what Cooper argues in this play is clearly lifted from my book.

This exchange infuriates Gomrowitz to the extent that he physically attacks Cooper, who is thrown to the floor before Ryberg is able to pull Gomrowitz away.

Later, when alone with Gersten in her office, Cooper is able to show her that much of what she believed with certainty about the Holocaust is not true, e.g. the alleged factories for making soap from dead Jews and the claim of homicidal gas chambers in camps in Germany. Although at the outset of the play Cooper had seemed a fidgeting idiot, by this point he has become a strong character, arguing confidently both in terms of historical fact and moral justification. He finishes this meeting with Gersten by depositing with her a mysterious audio tape, with written transcript.

The climax of the action comes when Ryberg and Gomrowitz come again to Gersten's office. Cooper is not there; rather, there is a mysterious old man, who turns out to be the allegedly gassed Nathan, whom Cooper found months earlier and persuaded to make the audio taped interview. Gersten has inferred that this whole affair was a plot of Cooper's from the beginning. She believes that after Cooper found Nathan, he persuaded an associate to become the secret informant who would lure the feds into moving against Cooper and putting him on trial under circumstances where the exposure of Gomrowitz's false claim would cause a sensation. This meeting is for the purpose of warning the feds of the perceived trap. Gersten's behavior here is frankly presented as grounds for disbarment. 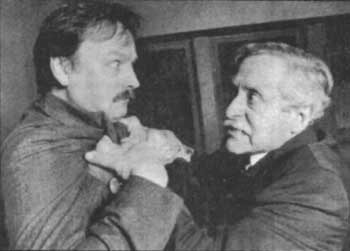 Ryberg drops the case and returns the several boxes of Cooper's files to Gersten's office. Now features of the play that had been ambiguous earlier become unambiguous. One disturbing message of this play is that Holocaust revisionists should not be countered with legal action or reasoned argument but with a disregard for law and even with violence. For example, when rioters identified as Jewish Defense League members throw a brick through her window, Gersten responds by throwing Cooper's files out the window to them. That ends the play, and apparently expresses the message.

That the plot of the play allowed Cooper some victories is not for a moment suggested as grounds for even mere tolerance of him. If it is granted that Cooper did indeed plant the secret informant, armed with phony information, in order to trick the feds, then there was an offense on his part that should be prosecuted. However the illegal conduct of the lawyers, and the decision not to bring Cooper to trial, is excused on the grounds that one must not give Cooper a platform from which to produce Nathan for the world. We are obviously also supposed to excuse Gomrowitz's attack on Cooper, and Cooper's lawyer's throwing his files to terrorists.

A common charge made against us is that we "cause hate". After a quarter century, I have yet to see the development of any of the "hate" alleged. However I think we have to plead guilty for the simple reason that nobody has to look very far to see the hate coming at us on account of our exercise of our critical faculties; this play is an example. Just as revisionists are hated with a burning intensity, the hatred of Cooper by all the other characters is palpable throughout the action. I believe that this play is the basis for a forthcoming movie starring Susan Sarandon as Gersten.[1] I hope the message changes.

Apart from the facts that Cooper is an engineering professor, has published a Holocaust revisionist book, and uses some arguments inspired by my book, he has little resemblance to me. He is an organizer; I am not. He is devious; I am not. My files have not been thrown to Jewish terrorists. Unfortunately I have not found the allegedly gassed friend of any famous author. Most important, I have never been prosecuted, and revisionists who have been prosecuted, in Europe and Canada, have been charged under laws, limiting free expression, that could not possibly be laws in the USA. Most infamous is the Fabius-Gayssot law in France, which since 1990 has outlawed contesting "crimes against humanity" as claimed in the 1946 judgment of the main Nuremberg trial! My friend Robert Faurisson has been fined heavily under this outrageous law. In Germany, my translator/distributor Udo Walendy, an ill old man, languishes in jail. Our leaders worry greatly about "human rights" abuses committed by China and look the other way when they are committed by their friends in the heart of western civilization.

"When all government, domestic and foreign, in little as in great things, shall be drawn to Washington as the center of all power, it will render powerless the checks provided of one government on another, and will become as venal and oppressive as the government from which we separated."
—Thomas Jefferson, 1821