Please help me run this ad in college newspapers

Please help me run this ad in college newspapers

Would you like to see the below advertisement (it’s new) run in student newspapers on college campus from one end of America to the other? Do you want to encourage students to begin to ask their professors for the name of one person, “with proof,” who was killed in a gas chamber at Auschwitz?

By running this ad in student newspapers we will reach, accumulatively, tens of thousands of professors and their administrators, and hundreds of thousands of students. If you looked at this ad here last month you will see that I have rewritten the headline and edited the text. At the same time, the core question remains what it was—“one person, with proof.” 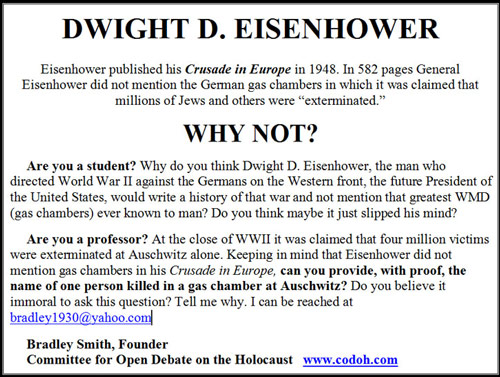 This is not a fly-by-night campaign that I just thought up, but one that began in February 2008 when I addressed a letter to the spokeswoman for the HMI, Emory Professor Deborah Lipstadt, asking her for “one person, with proof. . . .” The question is simple, direct, and so dangerous that she can not even reference it publicly, much less try to answer it. It is a campaign that is not locked into one presentation, but can develop with events.

Each insertion of this ad will cost on average $175 -- $250 and more.  Please contribute what you can afford, what makes sense to you\. If you know someone who knows someone, ask him or her to cover the costs of running the ad multiple times.

Once the ad is running, you will be able to follow the story on my One Person with Proof blog.