Auschwitz State Museum authorities have banned a British Broadcasting Corporation (BBC) television team and British historian David Irving from visiting the site of the wartime German concentration camp. In a July 15 letter to Irving, Museum official Krystyna Oleksy wrote: "We must advise you that permission will not be given for you to have any access to the Museum including the photographic and document archives. The BBC have been advised of the position."

No reason was given for the ban. "What are they fearful of?" asks Irving, the controversial author of numerous best-selling historical works. "It shows a grave insecurity, a lack of historical detachment. It's like the suspect saying: We don't mind investigators – just don't let in Lieutenant Columbo!"

Last October the BBC invited Irving to help with a television documentary on the suppression of free speech in Europe. Irving readily agreed. He also asked Museum authorities for permission to carry out research in their extensive archive of wartime documents, construction plans and photographs. Arrangements were made to fly Irving to Auschwitz on August 18 for two days of filming.

In a communication of July 20 BBC producer Nicholas Fraser wrote to Irving:

We've just received notice from the Auschwitz Museum, to the effect that they will not allow you access to the library or to any of the camp grounds. They control every inch of what used to be the Auschwitz complex and it would seem that we would be unable to film with you there. Reluctantly we have decided that we can't go ahead with our original plan. It just isn't possible.

Needless to say I am very sorry about this and I have tried in vain to convince the museum that this is not necessarily a way to promote freedom of speech. However, they are quite adamant and there is nothing I can do.

We propose instead to film with you in London ... 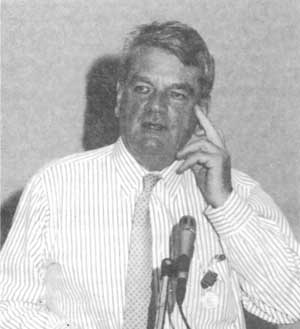 David Irving was in good form as he addressed 140 persons at a meeting, sponsored by the Institute for Historical Review, on March 28, 1998, in Costa Mesa, California. His lecture was entitled "Winston Churchill: Pearl Harbor and Other Wartime Secrets," although the British historian touched on other topics as well. South African scholar Costas Zaverdinos and IHR Director Mark Weber also addressed the spirited meeting.

In issuing the ban, the Polish government agency implicitly acknowledges that it has something to hide. As it happens, Krystyna Oleksy herself admitted in early 1995 to a journalist for the prestigious French news magazine L'Express that the room shown to tourists as a supposed execution "gas chamber" in its "original state" is a fraud. It was actually built after the war under Polish Communist supervision, and, as the magazine reported, "everything" about it is fake. (See "Major French Magazine Acknowledges'Auschwitz Gas Chamber Fraud," Jan.-Feb. 1995 Journal, pp. 23-34)

It's one thing for western European police and courts to crack down on revisionist historians, who don't have much popular sympathy or public clout. But it's quite another when authorities in Poland impose restrictions on producers of one of the world's most prestigious and influential media services.

In May 1992 a German court fined David Irving 10,000 marks (about $6,000) for publicly saying what L'Express and Museum official Oleksy now acknowledge. (See "Irving Protests German Persecution of Holocaust Skeptics," March-April 1995 Journal, p. 28) As a consequence of pressure from Jewish organizations, the historian is banned from Germany, Australia, New Zealand, South Africa and Canada.

In April 1996 New York publisher St. Martin's Press gave in to pressure from Jewish groups and cancelled publication of Irving's biography, Goebbels: Mastermind of the Third Reich. Polish editions of two of Irving's works, Hitler's War and his more recent biography of Joseph Goebbels, recently have been selling well in the central European nation.