IN LIGHT OF MY PREVIOUS POST: Advice-giving White men who think Germans should get off their knees and stand up to the world again should actually be asking the rest of the world to lay off the “Nazis” instead. And do they? It's they, too, who won't stop contributing to the unfair defilement of Germany's past. 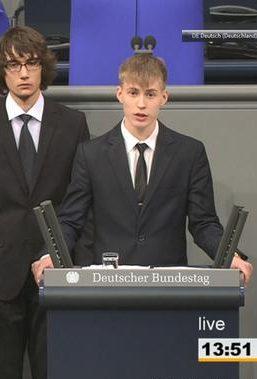 An illustration of this cropped up when a Russian high school student, part of a joint German-Russian school project on the fates of military prisoners on both sides in WWII, spoke in the German Bundestag last Sunday on the National Day of Mourning. There were three German students from Kassel and three Russian from Novy Urengoy (in Siberia). Above right: Sixteen-year-old Nikolai Desyatnichenko gives his short speech in the Bundestag on Sunday, Nov. 19.

With the German President, Frank-Walter Steinmeier, and many German cabinet ministers assembled, 16-year old Nikolai Desyatnichenko gave a two-and-a-half-minute speech about visiting a German military cemetery*, presumably in Siberia, and feeling “very sad” at the grave of a Wehrmacht soldier who was captured in the Battle of Stalingrad and later died in a prison camp. He said the soldiers buried there were mostly innocent people, many of whom had wanted to “live peacefully and not wage war.”

A Russian living in Germany recorded the remarks and published them in Russia, triggering an avalanche of indignation. On social media, some accused Desyatnichenko of treason for commiserating with a German soldier who was engaged in a “war of aggression.” To make matters worse, this month is also the 75th anniversary of the Soviet counteroffensive in Stalingrad which is celebrated in Russia.

Vladimir Zhirinovsky, leader of the right-wing populist LDPR, asked on Russian TV, "Who are these generous private sponsors?" of this school project. He wanted them examined. It happened to be the Russian energy giant Gazprom and its German partner Wintershall Holding, an oil and natural gas producer.

The boy's mother published a letter of explanation in the Russian media, saying her son wanted to speak about his war-veteran great-grandfather, but the speech had to be shortened because of time constraints. It was called a “misunderstanding.” His main message was a desire for peace in the world.

Finally, the Kremlin had to step in. Vladimir Putin's press spokesman, Dmitry Peskov, stated, "We believe it is wrong to accuse [Desyatnichenko] of evil intentions or Nazi propaganda.” Putin's human rights commissioner argued that "agitation and debasement" don't further patriotism.

As I see it, the excesses stem from the Russians making their "Great Patriotic War" a central part of the country's political culture and a key foundation of patriotic education in schools. Two years ago, the Duma enacted very strict laws as to what is allowed to be said and what isn't, making “Nazis” the ultimate and absolute enemy of the Russian people. This is a distortion of historical facts that will never cease to cause problems.

*German military cemeteries abroad are mostly the work of the private volunteer Volksbund or similar organizations, not the FRD or the Bundeswehr. I don't know about this one.