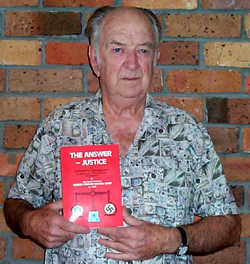 McClelland was the first of a group of volunteers in New South Wales to be sent into combat in World War II. He was taken prisoner by the Germans and interned in Theresienstadt in Czechoslovakia. He was liberated by American forces on 7 May 1945, just prior to the arrival of the Russians on the 12th. He writes:

“No nation on earth should be accused and convicted of a crime of the magnitude of the Holocaust on the basis of illogical and conflicting witness statements and without the benefit of modern scientific research on the alleged murder weapon. Until now, however, this has been the case with the alleged gas chambers in Nazi Concentration Camps. They have never been subjected to international forensic examination.”

He has set up a fund, The Australian International Justice Fund (AIJF) to be paid for by the proceeds from the sale of his autobiography The Answer—Justice. This fund was set up to pay for an International Investigation Team to carry out forensic research at Auschwitz-Birkenau at the existing remains of the crematoriums (alleged gas chambers). All proceeds from the sale of The Answer—Justice will go to the AIJF.

For some of McClelland’s observations regarding literary and documentary frauds about the Holocaust see:

To purchase The Answer—Justice, simply order it from the CODOH book store or send a bank cheque for AU$25 plus $5 postage (AU$13 for international postage) to: