U. The National College Magazine ran the above article on the Campus Project in its February issue. U. Magazine is a color tabloid that is inserted in college newspapers nationwide. It has a guaranteed circulation of 1.5 million and a total readership of 6.5 million.

The words reproduced over my photo, which I suppose will not come out when this newsletter is printed, contain the title of one of my advertisements, followed by the text of the first paragraph of the ad:

“A REVISIONIST CHALLENGE TO THE U.S. HOLOCAUST MEMORIAL MUSEUM:

“This ad does not claim 'the Holocaust never happened.’ Those who say it does want to muddy the issue. This is what the ad does claim: The U.S. Holocaust Memorial Museum displays no convincing proof whatever of homicidal gassing chambers, and no proof that even one individual was 'gassed' in a German program of 'genocide.'
“The question, then, is not, 'Did the Holocaust happen?’ The question is: If there were no gas chambers, what was the Holocaust?”

The short article itself contains a goofy quote of something I find it difficult to believe I actually said—what does forcing Jews “to find other arguments to combat neo-Nazi and anti-Semitic attacks”—what does it even mean? I don’t believe I said it.

On balance, even with the garbled quote, I like the idea that more than six million (heh, heh) students and others on American campuses had the opportunity to read the two paragraphs to the left.

Michael Berenbaum, the authority quoted in response to my garbled quote, is director of exhibits at the Holocaust Museum in Washington and the man responsible for exhibiting a misleading plastic reproduction of a door from the Majadanek “gassing chamber.” 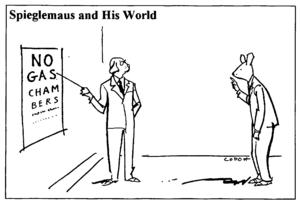 Spiegelmaus and His World / No Gas Chambers.

The Daily Student at Indiana University (Bloomington) ran an article on The Project in early January. I haven't seen it. Communications professors at Georgetown (MD), Ball State U. (IN) Glassboro State (NJ), and LSU (LA) are doing special projects on The Campus Project.

A writer for Editor and Publisher, the national trade magazine, has faxed me an article written on The Project in the 15 January 94 issue that I hadn't seen. It focuses on the Brandeis affair after the CODOH ad was run there in The Justice. The story ends with the following quote:

“Smith, when asked about the issue, only repeatedly insisted, 'Not one journalist has had the good sense to question the gas chamber exhibit at the museum. You would do well to ring them up and ask which exhibit displays proof of the gas chambers' existence.'“

Now there’s a quote I can believe I gave. Nevertheless, this simple idea has yet to come to fruition in the mind of one reporter.