The Gas Vans: A Critical Investigation 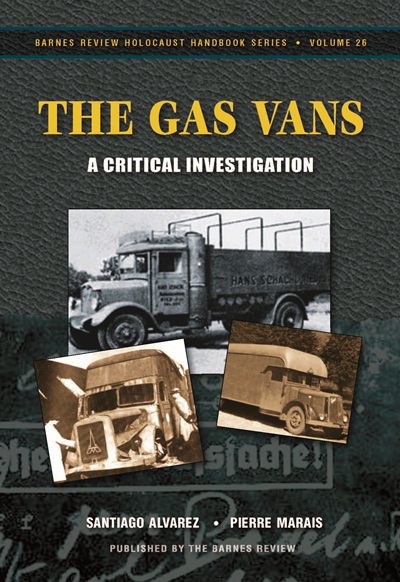 The Gas Vans fills a significant hole in Holocaust literature. Often forgotten in the public mind and limited to minor entries in the most important Holocaust tomes, (gas vans are mentioned on 4 pages out of 790 in Hilberg’s The Destruction of the European Jews and on 7 pages out of 622 in Reitlinger’s The Final Solution). While they may seem unimportant to the broader Holocaust story, one must pause when one realizes that the Holocaust fundamentalists charge that as many as 700,000 fell victim to these wheeled killing machines. Recognizing that the gas vans were charged with something greater than 10% of claimed Jewish Holocaust deaths, and with formerly key elements of the traditional story like the extermination camp at Majdanek being whittled away (total deaths have been reduced since 1944 from 1.7 million to some 60,000), it is a wonder that greater emphasis has not been placed on the gas van story. Revisionists, most notably Friedrich Berg and Ingrid Weckert have addressed the subject in various articles, but this volume represents the first book-length treatment in English from either camp in the Holocaust controversy.

According to the Preface of this edition, Alvarez had only intended to translate Pierre Marais’s French study Les camions a gaz en question (The Gas Trucks Scrutinized) (1994) into English. Apparently while translating Marais’s work, the author noticed numerous errors as well as flawed and missing arguments. Also omitted, of course, was documentary material that only surfaced post-1994. The resulting manuscript had grown by 100% and large sections of Marais’s text were either rewritten or replaced and in some cases even deleted.

The Gas Vans is Volume 26 in the Holocaust Handbook Series. It is arranged like many other volumes in the series — in a very detailed format that appears exhaustive and can be quite exhausting to the reader. Alvarez by the way notes that the current volume is far from complete as additional materials are held by the Zentralstelle in Germany and are inaccessible due to German censorship laws.

A German wartime producer-gas-truck from Saurer (Type 5 BHw, produced until 1935\. It is argued that had the Germans intended to commit mass murder with carbon monoxide, they would have employed this gas technology rather than the alleged diesel exhaust\.

While more readable than some of the other volumes in this series, it suffers from similar flaws. While technically there is an “Introduction,” the four pages labeled as such really do not introduce the topic historically. As the book begins we are provided with criteria for a legal and a scientific investigation. The book would have been well served with the historical background for the subject, especially in this case, where so little is generally known about gas vans.  The book begins in a way that suggests that the author assumes that his readership is already fairly familiar with the literature.

Before the reader knows it, they are on a rollercoaster ride of lengthy quotes and the debunking of the same. Before long we are already being treated to the topic of the toxicity of diesel exhaust gas. While important to the overall claims, the technical nature of this topic hardly seems to be something that would kick off such a volume. A long section follows which reviews relevant documents. Without much context, the documents are reviewed, oftentimes with reference to key revisionist arguments.

The book continues with a consideration of court records from both the war and post-war period. Finally the author addresses witness testimonies before reaching his conclusion. Essentially echoing an argument made by Friedrich Berg many years prior, Alvarez argues that the Germans were too sophisticated to use such a crude makeshift solution for murdering people en masse as the gas vans. He goes on to discuss so-called producer-gas vehicles that were equipped with wood gas generators as a much “better” alternative than what is asserted to have been used. It is interesting to consider whether such vehicles may have been created by the decidedly less sophisticated Soviets for the torture and murder of their political enemies. While there is some evidence that this may be the case, it remains inconclusive whether the Soviets retroactively charged their own crimes, like the murder of Polish officers at Katyn, to their German enemies.

Ultimately Alvarez and Marais conclude “there are …no material traces of these vehicles and no photos.” There is little doubt that gas vans are simply one more evil Holocaust fairy-tale like the soap made from human cadavers and lampshades made of human skin. Revisionists have thought this as early as 1948 when Francis Parker Yockey quipped, “a ‘gasmobile’ was invented to titillate the mechanically-minded.”  Forty-five years later, Ingrid Weckert came to a similar conclusion in her treatment of the subject, ”The Gas Vans: A Critical Assessment of the Evidence”

“On the whole, the evidence submitted for the ‘gas vans’ cannot be accorded any evidential value, and the claim that Germans had murdered thousands of human beings in ‘gas vans’ must be regarded strictly as rumor.”

There is little chance that this book will find new converts to Holocaust revisionism. Unfortunately even that hardcore group of revisionist completionists who seek out this handsome and well-made volume will likely let this one sit on the shelf and gather dust after perusing the photos and pictures. Alvarez has made an in-depth analysis of an important topic; one almost completely ignored by both sides of the Holocaust debate, but has done so in a style that will likely result in its neglect. That is unfortunate, because the fall of this pillar of Holocaust mythology is long overdue.

The Gas Vans may be purchased through: