The Myth of Natural Rights 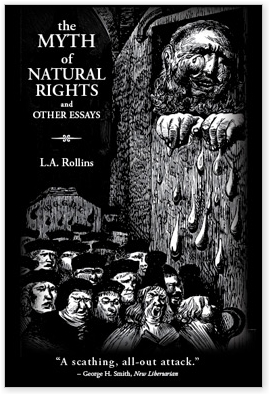 When I first read L.A. Rollins’ The Myth of Natural Rights and Other Essays, I wasn’t really sure how to react. As revisionists, we’re not really used to people taking us seriously. Sure: we’re used to getting harangued by little vigilantes, and we’re used to a kind of fast, incestuous praise from our revisionist peers. But it is seldom that we get the sort of balanced treatment that Rollins serves up in his newly re-issued libertarian manifesto.

First published in 1983, The Myth of Natural Rights succeeded in confusing terribly its libertarian audience. As the introduction says, “Rollins soundly reduces hallowed libertarian axioms to phlogistons.” According to Rollins, the “natural right” to liberty so fondly referenced in libertarian thought is an illusory sham. At its core, his argument is an attack on the convenient semantic elasticity of “natural.” Like Roland Barthes, Rollins reminds us that what is momentarily considered “natural” is simply a product of cultural mythologization—or, as Rollins puts it, “Natural laws and natural rights are inventions intended to advance the interests of the inventors.” In other words, culture tends to dictate what is “natural,” and culture, of course, is subject to the whims of opinion, fad, and fancy. For Scots, it’s “natural” to cut out a sheep’s heart, boil it inside its own innards, and then serve it up with whiskey. For libertarians, it’s “natural” for men to be endowed with certain rights.

As one might expect, Rollins proves to be no less a contrarian when turning his sights on what he calls “the sacred cow” of the Holocaust: “To many people, the six million figure is not a fact, although they call it that; rather it is an article of faith, believed in not because of compelling evidence in its support, but because of compelling psychological reasons.” Though the revisionist community has been saying this for years, it is refreshing to hear this perspective from an outsider like Rollins. To him, the Holocaust is a complex of social mythologies whose roots run as deep as any other cultural preoccupation. It is easy, then, to see why he regards the traditional tale with such suspicion. He recognizes that any mythology which requires such reflexive orthodoxy has to be propped up by a powerful vested interest, what he calls an “inventor”: “Morality…is a myth invented to promote the interests/desires/purposes of the inventors. Morality is a device for controlling the gullible with words.”

In other words, the Holocausters prop up the myth in order to control our beliefs on a vast assortment of topics—for example, when they compel us, lest we should want another Holocaust, to drop a few more bombs on Lebanon, c/o Israel. Thus Rollins understands that the Holocaust is not simply the murder of six million Jews. If it were only a simple historical event, school kids would remember it about as well as they remember the capital of North Dakota. Their middle school history teachers would have simply chalked it on the board before moving on to the Kennedy assassination. Yet the Holocaust has become a political, propagandized public memory campaign that affects people’s lives all across the world, not just wherever the Simon Wiesenthal Center maintains offices (LA, New York, Toronto, Paris, Buenos Aires, Jerusalem, and—you guessed it—Boca Raton). The American-Israeli alliance, which derives its impetus from the Holocaust campaign, inflames international relations on a global scale. After all, who could disagree with Alan Dershowitz when he argues that it is the long-suffering Jews’ “natural right” to have a tiny homeland carved out of the modern Middle East?

Like things that profess to be “natural,” the Holocaust wraps itself in an indignant unquestionability. This is what makes it so interesting to Rollins. He writes that “American academics have reacted to Holocaust revisionism with the same degree of open-mindedness as was displayed by the astronomers who refused to look through Galileo’s telescope but nevertheless ‘knew’ that he could not possible have discovered any new heavenly bodies with it.” Theirs is a tyrannical rationality, because they refuse to accept any conclusions other than those they concoct themselves. If a researcher’s findings fall outside their paradigm, they can simply write him off as a lunatic or a criminal or whatever. Because, as Rollins points out, the premise that “all reputable historians accept the six million figure smacks of a tautology. If [a professional Holocauster] defines ‘reputable historians’ to mean ‘historians who have accepted the six million figure,’ then what he says is, by definition, true, but also trivial because there is no reason why anyone else should accept such an obviously loaded definition.”

This is a pretty insightful remark, and it’s worth parsing out: if no reputable historian can make an unorthodox claim about the Holocaust and keep his reputation intact, the assertion that “no reputable historian rejects the Holocaust” is worthless. Of course, professional historians debate just about everything: they debate the Russian Revolution, the American Civil War, the Norman Conquest, and so on; yet, at the end of the day, these debating professors are allowed to keep their differing opinions and their badges of reputability. But the moment a historian ends up on the wrong side of the Holocaust, he finds his reputation tossed in the grinder. No matter how highly regarded he was before that moment, he is permanently banished from the club of reputability. Then, like magic, the Holocausters are right again: “All reputable historians accept the six million figure.” That their little club isn’t shrinking says less about the strength of revisionist arguments than it does about the courage of “reputable” historians.

Not one for dogma of any sort, Rollins addresses the need to “revise” Holocaust revisionism, calling himself “a skeptic regarding both the Holocaust and Holocaust revisionism.” As we might expect, he finds tons of egregious faults in James J. Martin’s revisionist appeal to libertarians, “On the Latest Crisis Provoked by Revisionism,” published in New Libertarian. Then, after flashing his revisionist credentials (Rollins published several articles and reviews in the Journal of Historical Review in the early eighties) he declares that Holocaust revisionists in general, and the IHR in particular, have been “spreading falsehood.” Rollins finds this a little ironic, charging that revisionists should be “setting the story straight,” not simply setting up another crooked tale.

Limb by limb, Rollins proceeds to hack apart respected works of nascent Holocaust revisionism: Udo Walendy’s The Methods of Re-Education, Austin J. App’s The Six Million Swindle, the works of Paul Rassinier, Richard Harwood’s Did Six Million Really Die?, and selections from the Journal of Historical Review. Misquotes, mistaken identities, outright fabrications—these texts are alleged to be full with them. And, as subsequent analysis has borne out, Rollins was mostly right. Yet one wonders why, in this 1983 piece, Rollins does not attempt to revise Butz’s The Hoax of the Twentieth Century. By this time, Rollins had obviously learned which school kids could be easily kicked around. But his revisionist readers keep waiting for the concessionary nod, the overt recognition that, despite some flaws in some revisionist texts, revisionist research had by the 1980s reached a maturity and depth not fairly represented by those few choice cuts. Unfortunately, he leaves us wanting.

But because of the scornful, precise attack Rollins then gives to the “dynamic duo” of Michael Shermer and Alex Grobman, I can easily forgive any of his text’s other shortcomings. Rollins, who had been slighted by the Duo (“a self-proclaimed ‘professional skeptic’ and a professional Jew”) in their ridiculous 2000 book Denying History, proceeds to dismantle that text’s claim to be an exhaustive critique of revisionists. After pointing out that credible, professional responses to revisionism have been published (his examples are Pressac, Vidal-Naquet, and van Pelt), he proves that Shermer and Grobman, on the other hand, are “a whole different kettle of gefilte fish.” After accusing the Duo of “hypocritical sniping,” he assures us that “almost all of the fallacies they attribute to revisionists—quoting out of context, selective quotation, selective use of evidence, the ‘snapshot fallacy,’ making unsupported assertions, engaging in speculation—are committed by Shermer and Grobman themselves in Denying History.” This, the most satisfying section of Rollins’ work, is filled with the sharp humor for which I will most remember Rollins. Any revisionist who wishes to see jerks like Shermer and Grobman have their day in court will be very pleased by Rollins’ hilarious retaliation.

Ending his section on Holocaust revisionism with a fair critique, Rollins concludes that, “The falsehoods I have pointed out suggest the possibility that some revisionists aim not to set the record straight, but to bring the record into alignment with their own preconceptions. If ‘revisionism’ means bringing history into accord with the facts, as Harry Elmer Barnes put it, then some of what passes for revisionism is not revisionism at all.” Fair enough. As a revisionist, I might say the same thing. But I wouldn’t condescendingly aver that revisionists have intentionally duped “lovers of historical truth,” like Rollins does. I am nonetheless grateful to Rollins, however, for conducting the kind of balanced, critical scholarship that revisionists must do in order to reestablish themselves as a credible alternative to the Holocausters. Indeed, he helps us clarify a goal: in order to refine our arguments and cultivate important new discoveries, we need an intelligent, critical venue in which revisionist scholars can further develop the field; like any other academic discipline, we need a medium through which we can revise old theories and explore new ones. With Inconvenient History, that’s just what we’re trying to do. And I’m sure Mr. Rollins would approve.