The Night the Dams Burst

The first new book by British iconoclast David Irving since 2008’s Banged Up is The Night the Dams Burst. For those of us who have been waiting for the third installment of Churchill’s War or the long promised biography of Reichsführer-SS Heinrich Himmler, this release came as a bit of a surprise and certainly fails to satisfy our appetite for real historical meat. The Night the Dams Burst is a but a thin appetizer based on three articles that Irving penned in London’s The Sunday Express back in May 1973.

Dams Burst tells the story of the RAF No. 617 Squadron’s moonlight attack on Germany’s Möhne and Edersee dams on May 16-17, 1943. As those familiar with David Irving would expect, his gripping account is based on primary sources including interviews with Bomber Command officers and official British and German documents. Irving also had exclusive access to the private papers and diaries of Barnes Wallis – the British scientist and engineer who invented the unique “bouncing bomb” which smashed the German dams. The book reads like a thriller and is tough to put down. 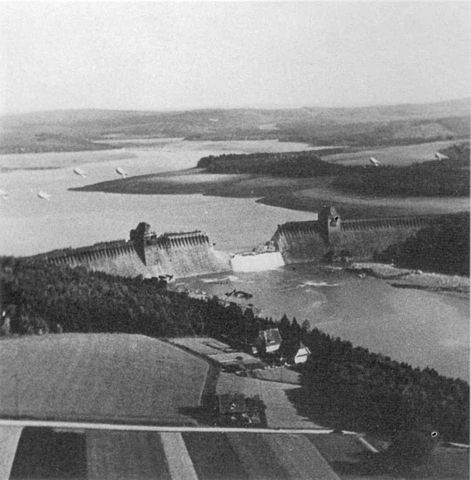 Photograph of the breached Möhne Dam taken by Flying Officer Jerry Fray of No. 542 Squadron from his Spitfire PR IX, six Barrage balloons are above the dam. Date: 17 May 1943. This is a file from the Wikimedia Commons. This work is in the public domain.

One might argue that the book is inappropriately titled. The book is not focused merely on the actual night of the raid but spends considerable time on the politics, planning and testing which occurred prior to the raid itself. Irving recounts the tale of the creative scientist Barnes Willis and how he thought he could help win the war by destroying Germany’s most vital dams. It tells of the skepticism that Barnes Willis faced from the likes of the British Admiralty and their initial thought that the interesting new bomb could be used against the German fleet instead of against German dams. Barnes Willis’s vision is only realized when Winston Churchill intervenes on his behalf and makes the dams project a top priority. Irving describes the initial failures as the new “bouncing bomb” is tested. Finally the book winds down with the exciting story of the RAF carrying out their mission and breaching the Ruhr and Eder valley dams. The dangerous raid resulted in a high casualty rate, nearly 40%, for the aircrews who participated.

For those interested in Irving’s revisionist viewpoints, it is important to realize that the original text for this book was published before Irving’s groundbreaking Hitler’s War (1977). With the majority of the text from 1973, it is not surprising that there is little that is revisionist in this work. If there is any revisionist element of the book, it is the time spent considering the German civilians who were killed during the catastrophic flooding of the Ruhr and Eder valleys, caused by the bombing. This humanizing aspect of the story allows the reader to consider not only the heroics of the British flyers but also the terrible loss of civilian life based on their actions. German casualty estimates from the floods were 1,294 killed including 749 French, Belgian, Dutch and Ukrainian prisoners of war and laborers. Irving notes that under international law, since 1977 such raids on dams are now considered war crimes. Indeed, Article 56 of the Protocol I amendment to the Geneva Convention outlaws such attacks “if such attack may cause the release of dangerous forces from the works or installations and consequent severe losses among the civilian population.”

Irving also goes on to describe the German rebuilding of the dams and the minimal impact that the bombing run ultimately had on the war. In fact in a little over a month the Germans had restored their full water production and the generator stations were feeding power at full capacity into the electrical grid. Albert Speer commented on the raid in his book, Inside the Third Reich, “the disruption of temporarily having to shift 7,000 construction workers to the Moehne and Eder repairs was offset by the failure of the Allies to follow up with additional (conventional) raids during the dams’ reconstruction, and that represented a major lost opportunity.” In the end, the greatest value of the raid appears to have been a boost to British morale.

The Night the Dams Burst is a glimpse back on the Irving that was and gives a hint at the Irving that might have been. This is the Irving who was the darling of the press and the Irving of best-selling books. There is little here that is controversial and there is no suggestion that this author would become a political prisoner in Austria or that he would become a pariah for his historical writings. This book is for anyone looking for an exciting wartime story and for Irving completionists who can’t wait for the long promised meatier titles.

The Night the Dams Burst is available directly through Focal Point Publications at https://irvingbooks.com/xcart/product.php?productid=17650&cat=3&page=1