The Sinking of the Battleship Bismarck

At its time, the German Battleship Bismarck was the finest, most feared warship the world had ever seen. It was a super weapon meant to help cut off the British supply lines in the Atlantic. Hence, when the Bismarck went on its first mission on May 19, 1941, the British launched the biggest hunt for a single ship the world has ever seen. Britain’s finest ship, the Battleship HMS Hood, was the first to confront the Bismarck, but it went down after its ammunition chamber was hit by a Bismarck shell. Only 3 men of its 1,415 crewmembers survived. "Sink the Bismarck!" was then the British battle cry. Britain sent an entire fleet after the Bismarck. The British quickly managed to encircle the Bismarck because its rudder had been damaged early on by a torpedo launched from a British aircraft. What followed was an uninterrupted shelling of the partly disabled Bismarck with cannon fire and torpedoes from many ships. Thus, it lasted only a few days before the Bismarck finally went down, 600 miles off the coast of France, on May 27, 1941. Only 115 of its 2,200 men survived, since the British abandoned the area in fear of U-boat attacks.

This British victory was vastly exploited by the Anglo-Saxon propaganda machinery with books, movies, and television shows.

The only problem is that the story is probably untrue. Survivors of the Bismarck have always maintained that they actually scuttled the ship to prevent it from falling into enemy hands, which is a German naval tradition. Scuttling charges were said to have been placed to shatter water intakes and other weak areas near the ship’s keel. According to those German survivors, these charges exploded about 30 minutes before the ship sank, thus being the real cause of the Bismarck’s demise.

The British Admiralty itself assumed in a report during the war that German explosives could have been one reason why the ship sank so quickly, but British zealots dismissed this idea.

Dr. Robert D. Ballard was the first one to discover the Bismarck wreck in 1989, one mile off the point were it sank, because it had slid down an under water mountain. (See his book The Discovery of the Bismarck," Warner Books, NY 1990) Since the ship was largely intact, he concluded that the scuttling must have been very effective. If scuttled incompletely, large air pockets remain within the ship, which are highly pressurized when the ship sinks and lead to the hull being crushed, as it happened with Titanic’s stern. But nothing of that sort can be seen at the Bismarck.

Of course, these claims have infuriated the British, who label such research as "revisionist claptrap." They organized their own explorations in 2001 and claimed that there are major gushes in the hull, indeed, thus scuttling can only have expedited the Bismarck’s fate.

In 2002, two more explorations were made, the first one in May and June of 2002 by a team of American and Canadian experts, using a Russian Mir submarine run by the P. P. Shirshov Institute of Oceanology (Moscow). These subs can deploy remote controlled mini robots in order to explore locations where the big submarine cannot go, here in particular the inside of the ship. So far, this team has not made many public declarations about their findings, but what they said indicates that the Bismarck’s hull has no large shell holes below the waterline that could have caused its demise, and not a single torpedo penetration.

The only damage to the hull that could have proven fatal is shown to have been the result of the ship’s impact on the sea floor. Reacting like a balloon full of water, the impact of this water balloon wrapped in iron armor caused the sides of the ship to bulge out and break in places—especially at the bottom, as the ship slid down the mountain slope.

The mini robots could also verify that the Bismark’s double-layered hull was never completely penetrated by torpedoes. The German engineers built the ship’s hull with two armor belts and placed water and fuel tanks in between. Torpedoes which had penetrated the outer layer exploded in the water and fuel tanks, but did not penetrate the second armor belt, thus the ship’s interior spaces were kept dry. 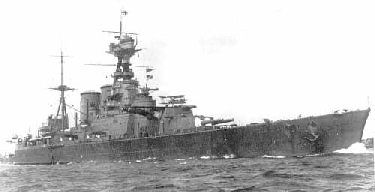 In July and August 2002, a second exploration led by Dr. Alfred S. McLaren, a former instructor at the United States Naval War College, went down to the Bismarck with the same technologies as the one described before, confirming the results of the earlier exploration. After thoroughly reviewing the material gathered during the last exploration, Dr. McLaren stated:

"We conclusively proved there was no way the British sank that ship. It was scuttled."