Margaret Chase Smith became a member of the House of Representatives in 1940 when her husband Clyde died. She served four terms in the House and then was elected to the United States Senate in 1948. She is remembered for having been the first woman elected to both houses of Congress. Smith today is most remembered however for her defiant stand against Joseph McCarthy.

In Smith’s now famous “Declaration of Conscience” speech of June 1, 1950, she defined the basic principles of Americanism as: the right to criticize, the right to hold unpopular beliefs, the right to protest, and the right of independent thought. She added, “The exercise of these rights should not cost one single American citizen his reputation or his right to a livelihood nor should he be in danger of losing his reputation or livelihood merely because he happens to know someone who holds unpopular beliefs.” She went on:

“The American people are sick and tired of being afraid to speak their minds lest they be politically smeared as "Communists" or "Fascists" by their opponents. Freedom of speech is not what it used to be in America. It has been so abused by some that it is not exercised by others.” 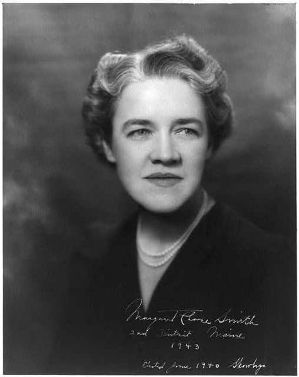 Margaret Chase Smith, 1943. United States Library of Congress. This work is in the public domain.

Pioneering revisionist historian Harry Elmer Barnes commented that, “Senator Margaret Chase Smith has accused Senator McCarthy of having unloosed ‘the Four Horsemen of Calumny –Fear, Ignorance, Bigotry and Smear.’” He explained however in his “The Chickens of the Interventionist Liberals have come home to Roost” that such techniques had long been practiced by what he dubbed the “totalitarian liberals.” The principle attacks noted by Barnes were those against any who opposed American entry into the Second World War. Barnes complained that even the iconic Franklin Roosevelt smeared anti-interventionists by comparing them to revolutionary war traitor Benedict Arnold.

The passing of nearly 60 years since Smith’s speech and Barnes retort have been witness to a terrible erosion of the basic principles that both sought to uphold. Americans have sacrificed their right to hold unpopular beliefs on the altar of political correctness. Freedom of speech has been so abused that many fear to exercise it today.

“Totalitarian liberals” and “Totalitarian conservatives” in Congress are quick to use fear, ignorance, bigotry and the smear against those who hold unpopular beliefs. The smear is not only used against those who write inconvenient histories of the Second World War but against any who don’t talk the new “official” party lines of political correctness.

Certain topics have become taboo to historical investigation. Chief among these is the Holocaust. This topic has become so politically charged that open investigation is prohibited in many countries around the world with free thinkers and investigators facing criminal charges, incarceration and censorship which reminds one more of Torquemada than McCarthy.

While any critical analysis of the events that comprise the Holocaust may be prohibited or simply avoided, the Holocaust itself is at the center of the tornado that is “liberal totalitarianism” today. There is such a strong desire to find and teach the lessons of the Holocaust that a central point appears to be lost. The lesson of the Holocaust has evolved into one that suggests that all people of good conscience must stand opposed to all forms of intolerance and hatred at all costs. Failure to do so will allow future or present-day Hitlers to rise to power once again.

This message however has been used to launch “pre-emptive” military strikes; strikes which can be launched at any nation deemed an enemy. Salaam Hussein was portrayed as a middle-eastern Hitler who was bent on domination of the region, building weapons of mass destruction (WMD’s), terrorizing his own people and even using poison gas. In the spring of 1991, in the Wiesenthal Center World Report Response a front page story claimed that Germans were producing Zyklon B in Iraq and even featured a photograph of “Iraq’s German-made gas chamber.” While no one accepts these outrageous claims today, the Simon Wiesenthal Center is above reproach by traditional media sources due to its namesake’s connection with the Holocaust story.

Today similar propaganda stories circulate about the Islamic Republic of Iran. Much of it is centered on President Mahmoud Ahmadinejad who is a target of hatred due to his statements which have been cast as “Holocaust denial.” Ahmadinejad is not alone however. Recently the case of Bishop Richard Williamson resulted in a firestorm of media coverage because the Pope had lifted the excommunication of a Bishop who did not believe the orthodox Holocaust story.

Those smeared by organizations, media and individuals who claim to be defending some form of tolerance have extended to national political and media figures on the American scene including Patrick Buchanan, Ron Paul and even CNN’s Lou Dobbs who frequently runs stories opposed to illegal immigration.

The so-called Anti-Defamation League has smeared professors John Mearsheimer and Stephen Walt for publishing a book critical of the activities of the Israel lobby in the United States. Former President Jimmy Carter has been assailed as an anti-Semite for having written a book which identified Israel as an Apartheid state. Even Jewish authors Tony Judt and Norman Finkelstein have found themselves assailed for their incorrectness.

At the foundation of these smears is a profound misunderstanding and misuse of the true lesson of the Holocaust. If any lesson can be learned it should be one of tolerance. But that tolerance must extend to all people and all ideas. To limit the topics or the ideas that can be discussed is to enforce a totalitarian method that is little different from a methodology standpoint than that of any other totalitarian regime – whether the Nazis, the Fascists, or the Communists.

Foreign regimes, even enemy regimes need to have their policies and our relations established through diplomacy and not war. Uncomfortable topics in today’s political arena ranging from immigration to the plight of the Palestinians and America’s relationship with Israel must be able to be discussed without fear of reprisal.

Finally the issue of inconvenient history, the topic which is most relevant to our journal must be able to be discussed, researched and written about without fear of persecution. In Germany today, questioning aspects of the Holocaust or publishing even scientific studies which vary from the orthodox position can be classified as “race hatred” and result in five-year prison sentences. The German government even went so far as to order the burning of the revisionist anthology, Grundlagen zur Zeitgeschicthe.

Burning books. Imprisoning those with whom you disagree. Blacklisting individuals for their ideas. The new totalitarianism comes from both sides of the political aisle. It demonstrates the worst in human instincts. It is an idea which is opposed to the true values of Americanism: the right to criticize, the right to hold unpopular beliefs, the right to protest, and the right of independent thought. It is a demonstration of the complete and utter failure to understand the most critical lesson of the Holocaust. It is an idea which would be opposed by Harry Elmer Barnes and Margaret Chase Smith alike.

The lead article of this issue of Inconvenient History, Joseph Bellinger’s “The Prohibition of Holocaust Denial” addresses the legislative assault against intellectual freedom around the globe while Paul Grubach considers the legal case against John Demjanjuk in his “The ‘Nazi Extermination Camp’ of Sobibor in the Context of the Demjanjuk Case.” These and the accompanying articles and reviews reaffirm our commitment to providing a forum for authors to present dissident opinions on historical matters regardless of how inconvenient those opinions may be for those in power or those who choose to cling to mythologized views of recent history.