The ever-ascending rocket that is Angela Merkel’s international image is powered by a precious, highly volatile fuel: the deep and wide—but finite—reservoir of good will and prosperity of Germany, the country of whose government she is head.

Merkel was educated in the public schools of Germany—the former East Germany, for what that is worth, and any realistic estimate of what she learned of Germany’s history in that setting must be modest both as to its extent and its veracity. This lament is not at all peculiar to Germany’s schools, not even those of the communistic German Democrat Republic of yore. The government schools of any country do a woeful job of informing its students of their country’s history, such that if Student Merkel had failed to pay any attention to it at all, she might have come away better able to address the subject at such later time (as when she assumed leadership of the country’s government) as knowledge of it would be important. But even that advantage would be lost if, after gaining the dubious benefit of ignorance, she then resolved it with any antidote resembling the official lies and distortions, or even failed to resolve it at all.

Merkel’s policies regarding the waves of African and Middle Eastern refugees lapping the diaphanous shores of her blessed homeland lead me to think that either she is ignorant of Germany’s recent history as it concerns refugees, or that she has willfully sacrificed the concerns it must engender to the immediate rewards of becoming Time Magazine’s Person of the Year for 2015 (as was, of course, her predecessor Chancellor Adolf Hitler in 1938). Hitler had not invited hundreds of thousands of foreign refugees into his country, but by the year of his Personhood, he had undertaken the repatriation of some thousands of Polish Jews who had entered and established themselves in Germany over a period reaching back well before his 1933 ascent to power. 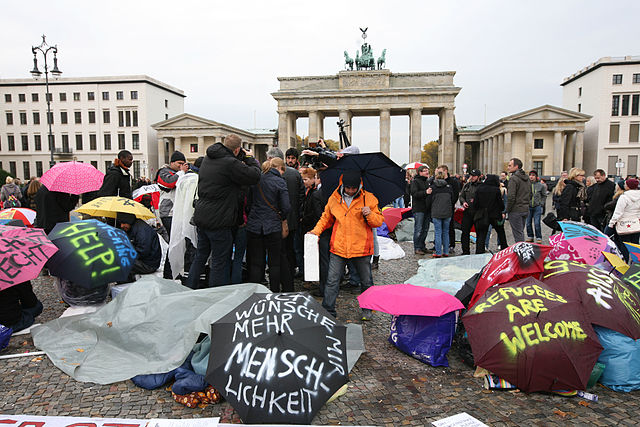 Kristallnacht—the infamous “night of broken glass”—may be traced to Hitler’s “reverse-Merkel” project, through the agency of one Hershel Grynszpan, the son of a Polish-Jewish couple caught up in Hitler’s early ethnic-cleansing program. The German government had consigned Grynszpan’s parents in an order of the previous month to join their co-religionists at Poland’s border with Germany, where the Polish government had erected Europe’s first concentration camps for Jews, since it did not want to readmit its erstwhile citizens.

Hitler’s ascent to international prominence, then, might be said to have been fueled by the intolerance and indifference of Germans, the grandparents, give or take a generation, of the people upon whose good nature Chancellor Merkel so lavishly prevails as her own star rises in the global firmament. The ensuing war (World War II) decimated Germany and its territory and people. Perhaps, despite the randomness that governs the impact points of bombs and artillery shells, the bloody process only killed the kind of German that would have approved of Hitler’s initiatives against not only the (Jewish) immigrants from Eastern Europe, but against German Jews, who had by 1933 come to dominate professions in entertainment, the media, academia, the law, government and medicine to an extent that alarmed many Gentile Germans and aroused their resentment, or worse. Of such combustible elements was the fuel powering Hitler’s massive boosters, seemingly of an altogether opposite character from the fragrant essence currently lifting Angela Merkel’s reputation into orbit.

Is Chancellor Merkel aware of the motive force provided to Hitler and the horrible trajectory of the war for which he bears an altogether disproportionate share of the blame, by the presence in German society of numerous recent arrivals with an alien religion and language(s)? Might she really imagine that the bombs and guns of the war that ended ten years before her birth might have picked off all the ”bad eggs” among her countrymen? Or might she just as fantastically suppose that seventy years of re-education have so excised the human instinct of self-preservation from the collective psyche of Germans that they now might be cajoled into sacrificing their culture, their language and yes, their territory, to invaders who, like the Goths seeking refuge in the Roman Empire from Huns invading from the east, warrant unlimited self-sacrifice and –abnegation such as the Romans ultimately rendered up to their pitied conquerors? 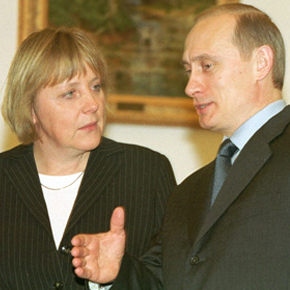 Whether she knows it or not, whether she cares or not, Merkel here is playing with fire that has been seen not long ago to consume the lives and fortunes of millions upon millions of innocents—of her own countrymen first and foremost, as she might have observed for herself had she been born as little as ten years before she was. Germans as a group today, no more cognizant of the history that so worries me than Merkel herself might be, might be inclined to play along with the new “Good German” brand that  made Germany the world’s most-admired country in a BBC poll conducted in 2013. But altruism, like war, is a grievously wearisome thing, especially when your side is losing. Yes, Germans may be willing, consciously or not, to have Berlin sacked, either gradually or more-notedly as the Visigoths’ sacking of Rome in 410 was.

But by no means all Germans are willing to see this happen, nor, for that matter, do they wish a replay of events that followed 1938’s Kristallnacht on out well past Germany’s surrender in 1945. In order to prevent both of these execrable developments, it would seem necessary to slow the influx of people who speak no European language whatever, who adhere to a religion that is, if anything, even more-antithetical to Germany’s hitherto-dominant Christianity than was Judaism.

Doing any such thing would appear to be vanishingly remote from any agenda that Frau Bundeskanzlerin might be contemplating. That may be much worse than merely unfortunate.

Frau Merkel’s countrymen may yet retain more of that resilient vigor than may have been apparent to her among the communist slaves with whom she spent her formative years. If they do, they may react—after the point at which it might be convenient, or peaceful, to do so—to the infusion of so many aliens, deserving and otherwise, among their number that they are rendered unable to maintain the structure, the “regularities” as sociologists call them, upon which they discover that so much of their ability to enjoy peaceful, productive lives depends.

They might fight to regain what they have so painstakingly rebuilt from the ashes and rubble of that last conflagration.

And if they do, Angela Merkel will surely be off somewhere safe, perhaps in America with Ayaan Hirsi Ali, ex-Muslim ex-member of parliament of the Netherlands, or elsewhere. But there will, as before, be blood in the streets. There will be concentration camps. Innocents will die, in great numbers.

Perhaps yet another Person of the Year will emerge from the turmoil.

I only hope that it all can be kept from exploding into World War III.